I am just wondering if I was the only one who saw the Bobble on the main page and thought: wow thats a pretty forgettable design, thats the best you could come up with in 1 1/2 years? Personally I’m tired of seeing Karim Rashid’s work get so much attention all the time; to me it looks like an interns work with a Karim’s name stuck on it. Also the world does not have to be built entirely out of spheres and cones!

I actually really like it. Saw it on some blog when the first images were released.
There are many factors to this design that we, who haven’t used it don’t know. For example how well it works when you drink from it or exchange the bottles.
This of course is an awesome chance for him to design a gadgety thing like this.
It has the shiny coat of “sustainable design” with all the right buzz word such as “reduce PET waste”.

Also the world does not have to be built entirely out of spheres and cones!

This is true but Rashid’s world kind of does. This is his signature and if you hire him, that is what you will get. I am happy that there are designer that stick to their style. If you get Jasper Morrison or Marc Newson, you will get something entirely different.

How the hell does that “patent” work?
*
I can drain perfectly drinkable water from my bathroom all day, but I don’t
like how it tastes. Solution?

How the hell does that “patent” work?
*
I can drain perfectly drinkable water from my bathroom all day, but I don’t
like how it tastes. Solution?

Does this fit in my car’s cupholder?

Do I need to suck or squeeze the bottle to make it work?

Is it going to tip over all the time?

The generic forgettable design was secondary. We (ID profession) need to do a better job of marketing good design than celebrity designers do of marketing themselves.

Does this fit in my car’s cup-holder?

Amen to that… I was given one of those fancy Kor One water bottles designed by RKS.
Very cool looking and innovative from an ID/manufacturing point of view - however.
It doesn’t fit in my car’s cup-holder so I have to hold it between my legs or try to prop it up somewhere when driving which has turned out to be so annoying that I don’t use it anymore.

It also has garnered some pretty funny comments at soccer practice. “that’s the prettiest water bottle I’ve ever seen - did you design that?”

Does tap-water need to be filtered?

City residents say Yes, Cities always say No. Minneapolis has some of the best water in the country, but people swear it tastes and smells bad. They’re crazy.

To add to my original post I wanted to throw out some of the specific points that bother me.

This one? It is nice looking. Wouldn’t fit my cup holders either.

The Kor is a nice looking bottle but the math doesn’t quite add up for me.

Kor: about 30 parts vs. Nalgene and about every other bottle: about 3 or 4 parts

Why so many parts, does it work 10x better?

All of these bottles seem difficult to wash the interior. Why can’t someone make a large screw on lid with a spout?

I really dig the Kor One. Best part is is flips open so is easy to fill and no fussing with threaded tops. I’ve been so close to buying one so many times online, but always get put off by the shipping costs. I know if I saw one in real life at a shop, I’d buy it in a sec. 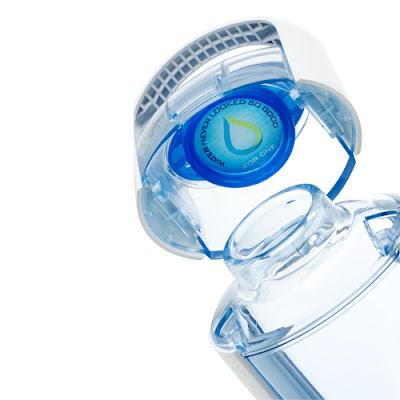 All of these bottles seem difficult to wash the interior. Why can’t someone make a large screw on lid with a spout?

Not nearly as pretty, but more along what you’re asking for…

Agree with all comments.

It has the best valve system I’ve ever used. It’s a combination “cats ass” valve with twist lock. It’s got a very high fluid transfer rate, and a simple squeeze of the bottle (from any angle) results in a strong stream. I have several of the Camelbak Nalgene bottles like the one above with the straw, and they’re just too hard to drink from!

The newest version is called the Podium Ice, and it uses AeroGel for its insulator!

This is my favorite, I get water, and I laugh everytime. 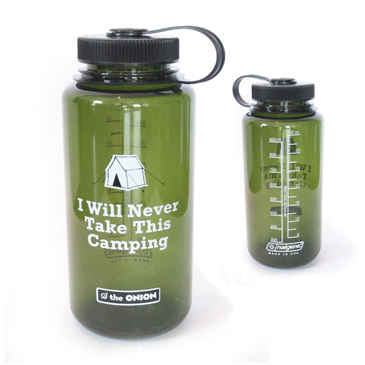 To CG: HUGE fan of the podium bottle. They even eliminated that plastic taste!
To mrtwills: HAHAHAHA!

Correct me if I’m wrong but are we talking about a bottle that filters tap water or this: http://www.lifesaversystems.com/ ?

Because I drink tap-water all the time. I put it in regular PET-bottles if I want to take it with me. And reuse it many many times. Seriously a bottle that filters tap-water? What are guys drinking, sewage waste? This is stupid. Even if it is 100%recyclable. There’s already bottles that do the job. A regular PET-bottle, just don’t throw it away. And if you do you might wear it the next winter.

If you actually saw the Kor bottle in person you would change your mind, feels so cheap and big. I’m personally a fan of the CamelBak Better Bottle (top one). What makes it difficult to drink from? By the way the CamelBak Podium is a bike specific bottle, and I think it looks nice.

I’ve been using the same Aquafina liter bottle for four months! We have a Reverse Osmosis system in our kitchen and I refill this bottle every morning. Every once in a while I notice that the bottle has some “greenery” developing in the bottom so I use a bottle brush to clean it out and maybe a little OxyClean; back in business for another four or five weeks. Eventually I get disgusted with the overall condition of the bottle and throw it in the recycle bin in the garage, spring another $1.50 for a “new” bottle, and I’m good to go for another four months.

Sadly, the “new” Aquafina liter bottle features a smaller cap, as used on the 591mL bottle (right), and is not easily cleanable… too bad. As the commercial goes, “45 minutes in traffic, an eternity in a landfill.” Still, it’s good for six weeks of re-use before the flora makes it less than shall we say … appetizing from which to imbibe.