So, what do we think?

(can’t seem to find an equivalent US page).

Looks pretty hot. Glad to see it’s toned down from the concept that was very Tron. Still looks a bit busy, in particular the rear, but I’d imagine should be very interesting in real life.

Guessing this is to be in the R8 price range?

That rocker panel is a bit much for me too. And the girl in the video is confusing. I know ssex sells, but you would think they wouldn’t put her in such a fugly dress.

Is the gas tank up front? Or is that for the plug?

Is the gas tank up front? Or is that for the plug?

I was going to ask the same thing. I remember seeing this in person at the LA Auto Show in late 2011, back when it had transparent doors. I also remember trying to explain to people that they intended to go into production with this, and that it was expected to remain somewhat “concept-y” in appearance; where I learned this from, I can’t remember, but it may have been from the presenter at the show. I know it’s not everyone’s cup of tea, but I’m glad it just looks a bit different and fresh. I like the i3 as well.

This is the most significant car design in the last 15 years. Remarkable how close they stuck to the concept. I thought it was whacky that Chrysler kept the Prowler, PT Cruiser and Viper close the concept cars, but BMW just made all of those cars look conservative and easy to move to production.

The girl in the video is confusing for me. We live in a world where I can get pr0n 24/7. I don’t need a conservatively dressed girl in my car commercial anymore. That does zero.

Hard to tell where the gas tank is. The engine is actually in the middle. Maybe the tank is in front or it’s for electricity.

I think they’ll end up closer to $175k optioned out. I like it, but I’d want something a little more exotic looking- apart from all the weird surfacing and Lambo doors, proportionally this is too close to an M6. I’m sure they know their market though, and I’m equally sure I’m not in it.

There are 2 small doors – one in the front and one in the rear – so I believe the one up front is for electric, and the rear is for petrol.

The original sketches and early concept car looked more cab forward, shorter overhangs, nose pushed down a bit more, more unique proportions in side view. This production car – as always – sacrifices some of that and looks quite traditional from the side (once you see past all the gratuitous decoration). Side view proportions or stance therefore seem to lack dynamism for me, which the surfacing is trying mightily to compensate for. And the side view details became expected – traditional door cut, typical mirror, and perhaps most painfully, the Hofmeister Knick part line or frame or sealing catches way too much light or attention compared with the way it was handled subtly under the glazing in the concept. Is that bothering anyone else?? That little flaw just destroys so much for me. Just when you were transporting me to the future, you reminded me of reality, of production compromise, of the past.

But the other views still have a lot of interesting things going on for a production car. So much to look at and candy the eye. So in the video (and I’m sure in person when the doors open) it still looks different enough, has retained some ‘wow’.

One thing I do really like, is how the overall feeling, stance, naming and vibe to me are a continuation of the 850ci.

That car when it came out in the late 80’s was unlike anything else. I was actually looking at one mint the other day… only $10K…hmm 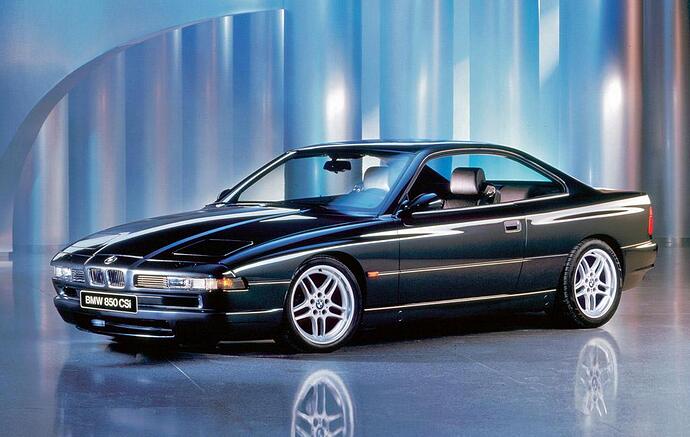 850, that´s exactly what I was thinking when I saw the new version in Black/grey. which is nothing negative. I always wondered why they didn´t choose to compete with a more supersport kind of model when they used to have them.

I am a bit disappointed/confused that the i8 isn´t more “electric”. While I like the design, I would have liked it better if the i brand of BMW showed more dedication to e-mobility with the i8 as well. Tesla is showing that it does work, so why not at least have different versions.

I put it in the category of things I’m not personally a fan of but that I’m glad exist.

Cleaner than the i3.
I wish someone would make a middle-class no-subsidy hybrid/electric minivan/station wagon. Let’s be honest, who needs short range economy more than minivan users? 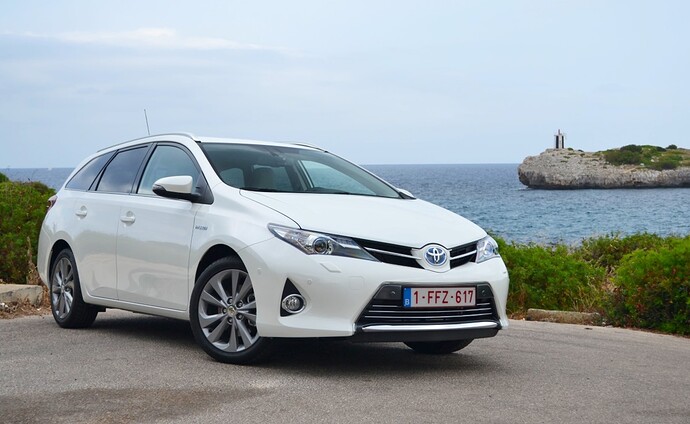 Toyota Auris Hybrid Wagon: Are You Missing Out On Europe's Prius V Alternative?

It's easy enough to find a hybrid these days, with plenty of automakers offering cars that blend gasoline engines and electric propulsion to one degree or another. More difficult is finding a hybrid vehicle suitable for more active families, those...

You guys might have seen this article, but it’s one of those once you see it, it can’t be unseen kind of things. Enjoy.

The 2015 BMW i8 looks impossibly cool. It's the most futuristic road car that I can think of and I love it. But I've now seen something on Twitter I can't unsee: It appears the rear of the car swallowed a 911.

“…The 2015 BMW i8 looks impossibly cool. It’s the most futuristic road car that I can think of and I love it. But I’ve now seen something on Twitter I can’t unsee: It appears the rear of the car swallowed a 911…” 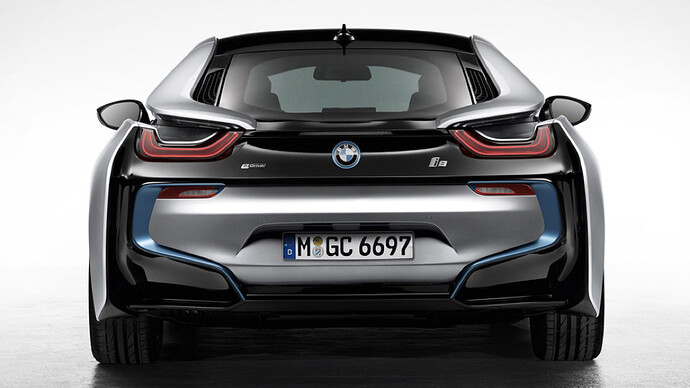 Looks super Tron but not very aero with all those overlapping surfaces. How does it get 95mpg?

I’m sure the proportions are awesome in person, but the whole thing just feels a bit overdone for me. Fussy. I think it will date like the interior of a W hotel. I can appreciate all of the design “wins” : 3 body colors, crazy lighting, very sculpted surfaces (to the point of looking overly twisted in my opinion, based on pics, need to see in person). All of those things are hard to do… I get that part. It will push other companies as well.

On another note, I saw an M1 on the road the other day (actually driving, so amazingly strange) and it still looks fantastically radical. So simple, so straight forward.

I guess the saying “simple is hard” is really true.

Name a supercar from the last 20 years that doesn’t look at least a little bit ridiculous.
(Besides the 458…)

I’m liking it even though the back end is a bit unresolved. It actually has a bit of R8 in it’s proportion to me, and maybe that’s why I like it. I don’t see it as a new direction for BMW, just a sketch of sorts for a supercar.

The Audi R8 and Alfa Romero 8c to name 2. Even the Lambo Gallardo and Murcielago are pretty restrained. Very simple. Any Aston Martin up until the One77. Porsche Carrera GT. Ford GT. These cars are more along the lines of timelessly beautiful. The BMW z8, not really a super car, but there is one for sale down the street and it is beautiful. Still fetching 6 figures in the Alpina trim.

I think Ferrari is returning to more beautiful cars again with the 458 and F12 Berlinetta but still pretty far out there compared to the above.

You got to see the i8 in person and on the move. It might as well be the
foundation of a new (sub) categorie. A “supercar” it is not.

It brings the word “eco” into the halls of “top gear” and with some cred.

The whole “giving birth to a 911” thing is an internet phenomenon founding
on a (tweaked) pic out of one perspective. Here is what that facia really looked
like on the IAA: 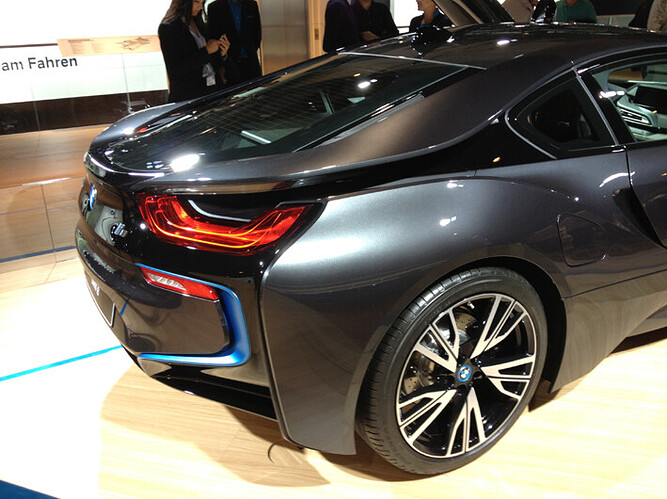 I agree, Michael. The R8 and the Alfa are easily the most restrained of the super cars. But you could argue that the cars you mention are just a bit ridiculous looking next to something like a 5 series, or a Jetta, or Ford Focus. I just think that since the body work is so… flamboyant on this car, it gets put into super car category by default, especially with the mid-engine look. There aren’t too many cars out there that aren’t super cars that are mid-engine. Toyota MR-2 and Pontiac Fiero (!) are the lone standouts.

I guess I see the i8 as trying to be a super car. Maybe I’m wrong and it’s just a forward looking eco-machine as mo-i said.

The BMW z8, not really a super car, but there is one for sale down the street and it is beautiful. Still fetching 6 figures in the Alpina trim.

One thing I do really like, is how the overall feeling, stance, naming and vibe to me are a continuation of the 850ci.

That car when it came out in the late 80’s was unlike anything else. I was actually looking at one mint the other day… only $10K…hmm

Stick to a V8 model with a manual tranny. With that configuration the only drawbacks will be 15 year old electronics (of which the 850’s were loaded) and possible nikasil or alusil block issues (but most of those were taken care of when the cars were fairly new).