here is a desktop speaker project i worked on . my goal was to create an elegant and interesting new speaker form that has an innovative controls interface integrated into the form. any relevant thoughts and suggestions are appreciated ! 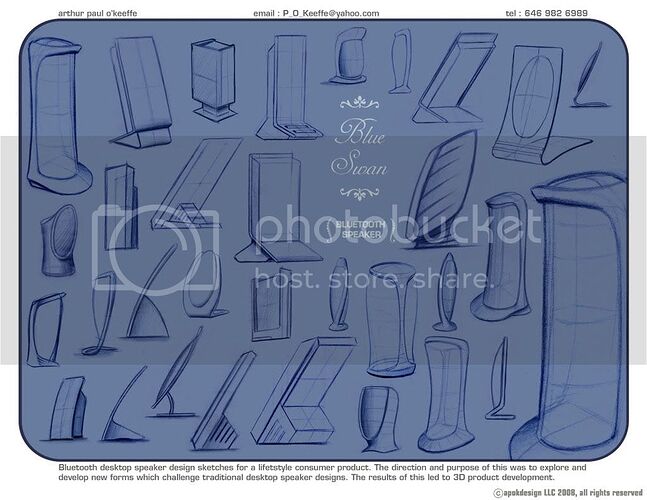 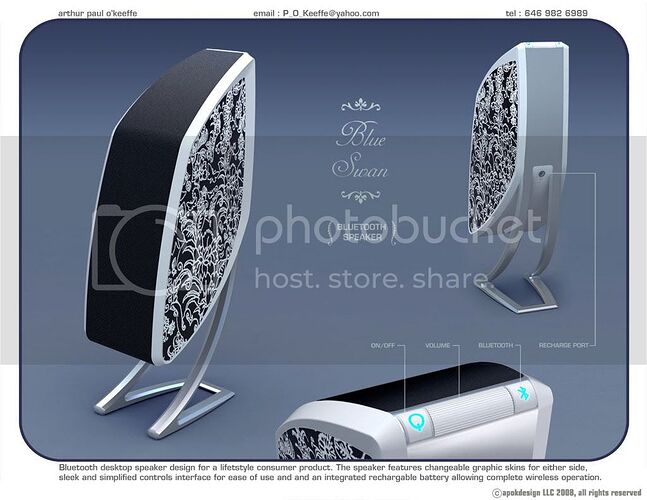 I’m curious, according to you, why did you choose to put that pattern on the side of the speaker? Where did you find the pattern?

Moreover, how are you proposing to manufacture the pattern? It looks printed here.

Some good stuff. I’m going to harsh out on you a bit here, but I wanted to put down a few of the things I would look for if I was reviewing this in a portfolio:

I’d like to see some more process. None of the sketches clearly relate to the final product. From the thumbnail page, it would be great to see 3-4 resolved, polished concepts (could be sketches, photoshop renderings, quick models…), from there one could be selected to take into 3d and refined further.

The same process with the patterns. Is this the best pattern? Did you explore multiple solutions? How does the selected pattern relate to the target consumer?

If one of the primary goals was an innovative to control the volume, how about a page or 10 on different solutions to that? Different ways a user could control volume?

I think filling these in will be the difference between a full blown project, and a form exercise.

mr-914 : this pattern was one of many that was developed, with a little help from some fashion and textile designers that i work with, that was chosen for presentation. is was inspired by various art nouveau floral etchings and graphics. this pattern would be an adhesive label. considering the form, it seemed like the best place to put it, and with several differnt patterns developed, it allows for a broader range of consumer taste. considering a better budget, i would love to do a vacuum formed velure material where all of the black color is or even a laser etched pattern where the motifs are revealing an ambient light source behind…

yo : all valid questions here. the only sketch relating to the final form is one to the right of the logo in the sketch sheet. i did some developments of this, though mostly in alias with hairy loose sketches on screen etc…

i did develop several different patterns for this, i just have not shown them here. i feel this one is appropriate for a contemporary lounge style scenario.

on the controls interface, again i have some loose development sketches that i did not show here. for example, one control scenario relates to the sketch to the right of the logo that looks like the side profile of the speaker somewhat, has some contour lines on the side and these lines might be touch sensors for volume, base, treble etc…

you get me thinking about developing these loose sketch developments into the project presentation. i’m on it ! 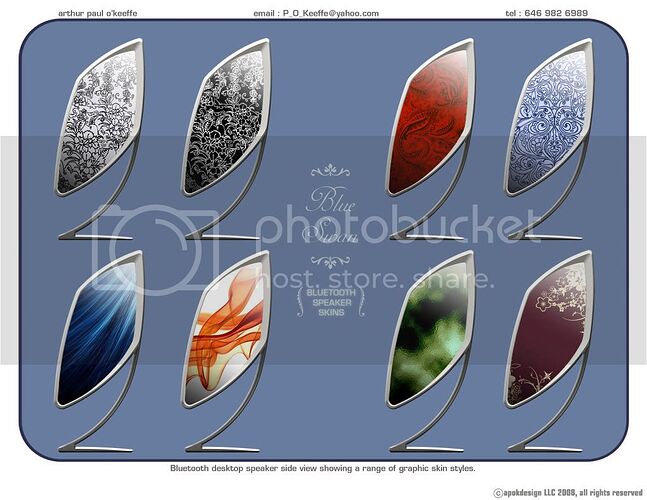 And the power button feels like its been slapped on the back.

ouch, tough crowd. I like the variation page, it shows that you are exploring. I do agree that the patterns do seem a bit stuck on though.

Would like to see this kind of page in terms of the volume interaction, as well as the overall form.

Could be nice to explore the mount as well. It seems like you could detach that stand and attach a wall mount?

Those graphic patterns seem to clash with the form of your speakers. To me, the speakers seem to represent movement and I can only see two patterns that sort of “help” the product out. And I was wondering, is the speaker grill going to be black or will it be change to suit the color of the graphic patterns?

If you are really interested in SWAN look …You should do some more exploration for swan look/stance & also extend it to other elements.(ex. controls)

so my first comment is that of the recharge port, these speakers running on bluetooth technology will eat up battery power really fast, hence i see people leaving them plugged in to the power. If that’s the case, you are going to have an ugly wire dangling from the back of the speaker for everyone to see.

i do agree that the patterns look tacked on, maybe take the patterns down a notch and try not to make the colors so vivid, after all these are speakers

Nice Project!..but I agree with others on the graphics! For me those adhesive stuff looks cheap…because it is cheap I know! But overall the speaker is looking classy…did you think about having one lasercut panel to click or somehow attach to the side of the speaker…that way you would get a nice relief…and it’s still exchangable…

some new speaker developments are posted above. these were developed on a tablet pc which i only recently started working on and it’s taking some getting use to (i’m usually old school with prismacolor/verithin and markers).

to answer some of the issues that were mentioned :
with regards to the ‘skins’ on the sides, ultimately these would be flexible lcd screens that would automatically adjust their graphics to the environment the speaker(s) were placed in, possibly blending in or mimicking color and pattern characteristics of their local environment. realistically at this time, they could be laser etched detachable panels. lastly, they would be decals so even the user could print their own decals and place them on the speaker. at the end of the day, the ‘skins’ shown here are a variety of ideas i thought of, it would be entirely up to the user which patterns, if any, they wanted to show.

i was not specifically focused on developing a ‘swan’ look from the beginning, it’s profile was something that just turned up in the sketch explorations. i purposefully focused on developing a speaker support profile which had tension and balance, i feel these are important characteristics of music and so the speaker design had to incorporate them in some way. i didn’t want to add too many ‘swan’ characteristics and end up with a kitsch looking swan novelty speaker.

many different interface options were explored throughout development. the final design and location of them was chosen so as to localise them in one area and provide ease of use using existing technology. also, they do not intrude or ‘stick out’ from the form too much while the button back lighting helps elude to their location. placing the controls and recharge port in the main speaker body was considered to be the sensible place considering that is where all of the electronics are based (powering through the foot in the final design would be possible but challenging and expensive).

it’s been a fun project to work on. thanks for your observations, any more constructive comments are kindly appreciated !

i like the overall shape, it reminds me of a warped maxtor external harddrive

my take on it, i think where you are using patterned decals should be the speaker grill of a traditional black cloth wrap. the volume button could then be separated from the others and moved to the front, which will make it easy to use the touch sensitive volume slide.