Well, here is my latest bike design. I basically tried to throw together all of my ideas into one high-end machine. Feel free to rip it apart! 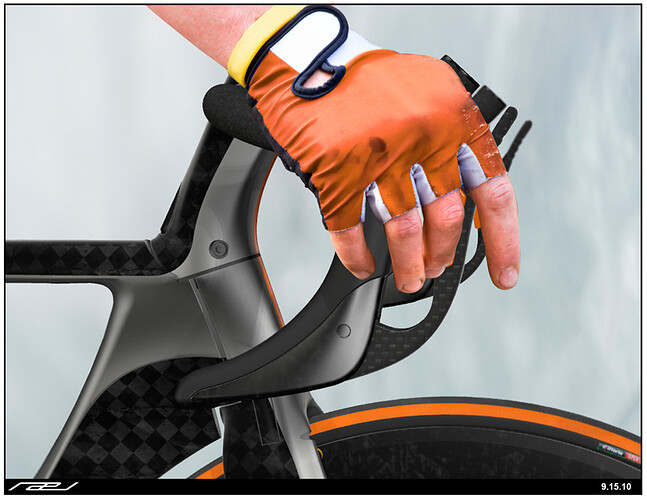 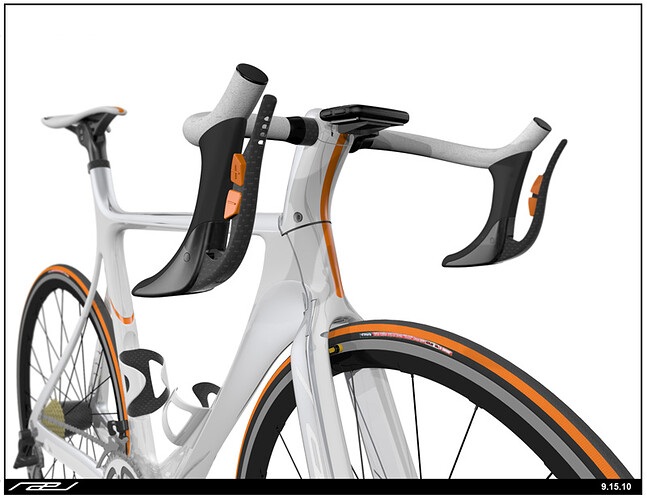 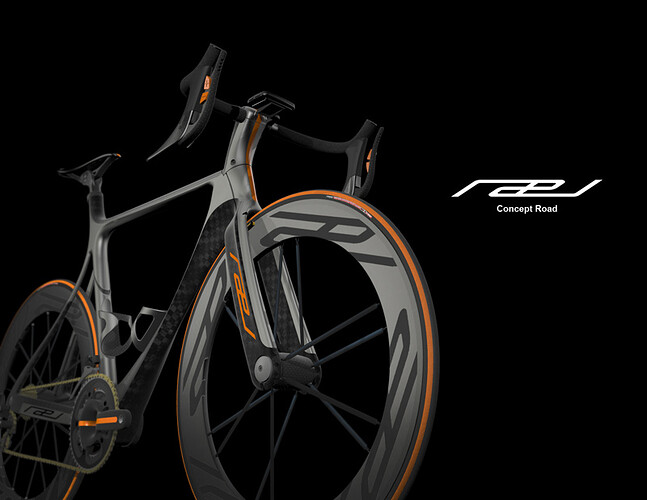 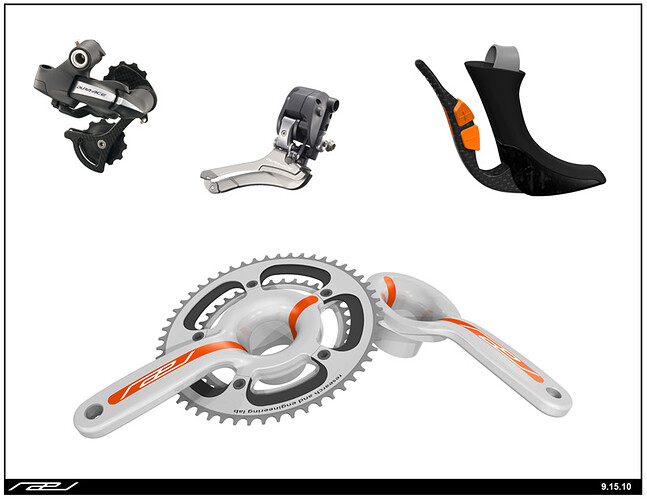 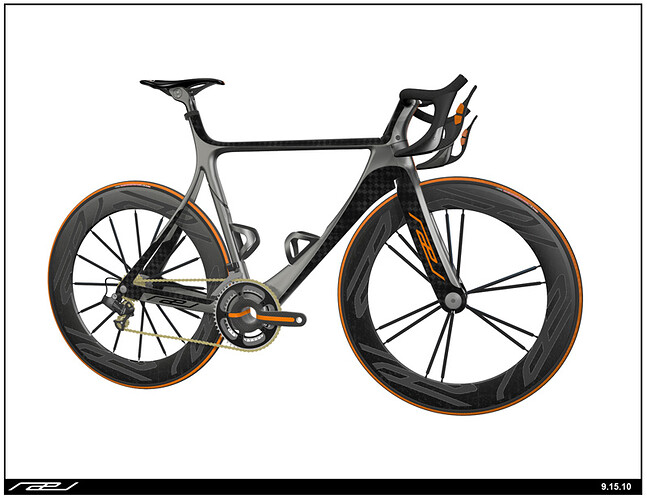 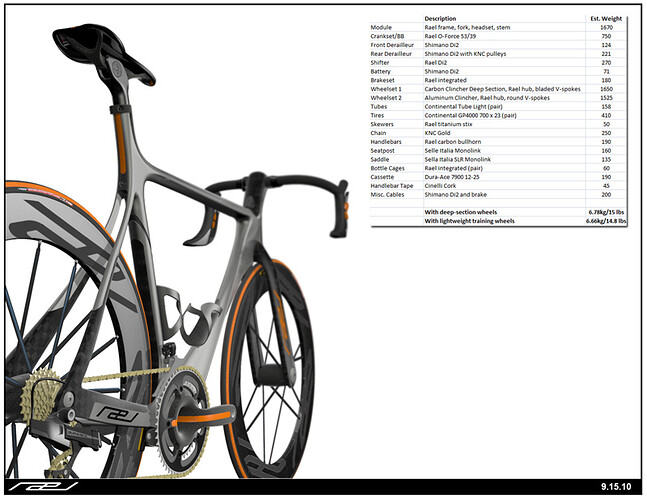 I don’t know anything about bikes.

Lots going on and looks interesting to me. Only thing I find visually inconsistent is the curvy rear triangle part that goes from the downtube to the rear deraileur and the bottom of the triangle main frame which is curvy and looks visually weak where the carbon fiber part is scalloped out. To me would seem more consistent if more rectilinear with radii like the top tube, from forks, and arms that come from the main gear (dunno what they are called). Hope my poor description makes some sense.

Visually, mix of materials is nice and like the colors, graphics and overall feel. Can’t at all speak to function

One question - How do the front handgrips work? I understand how the brake and buttons might works, but what about when you need full grip? Where do your fingers go? Doesn’t seem like enough space between the brakes and main grip.

Also, non bike guy, so my thoughts are primarily aesthetic. Loving the handle bar assembly, grips, brakes and how that flows into the fork. It all feels very strong. I feel this area relates nicely to the sprocket and pedal area (clearly I don’t know the terminology…). I agree with R on the soft rear triangle and would add to that the lower front bar that runs from the fork to the pedals. The curves create a lot of negative form that give the visual impression of sagging to my eye. The top bar and bar that runs from the seat post down to the pedals seems to reflect the strength elsewhere… again, wish I knew the right words to cal these parts by…

I love the stripe that goes down the head and looks like it carries into the seat. Sweet model.

Interesting design. Now I see where you’re headed with your “fully integrated” component line you’ve been talking about for a while. You’ve got some really nice things going on. Wheels are cool with those huge carbon hubs, the saddle/seatpost looks familiar (Selle Italia?)

What I really love is that crankset. That’s a great use of current technology to allow such a large pass through there. (How you actually plan on pulling that off, I’d love to see…) I haven’t seen curves like that on a crank since the old CODA Magic!

I’m not loving the stem/bar setup. I appreciate that you made it fairly integrated like a higher end TT bike, but why such a huge rise on the stem? That would likely make for some pretty twitchy handling in my experience. I also agree with Yo and RK about the down tube being kind of droopy. However, I think if you flattened the stem out a bit that might disappear. Right now your eye carries from the crank set, up the down tube, and right up to the bars in one sweeping motion. It’s just a bit awkward to me.

I like the levers/shifters, too I’m just not crazy about the “flop and chop” bars they’re attached to. A bit to fixster in my opinion.

Thanks for the comments guys. As for the stem appearing to be very upright, it’s an optical illusion because of the bayonette-style fork. Trust me, geometry was key in this design and I’m a finicky cyclist. I hate twitchy bikes. This design basically places everything where it “should” be and goes from there. The handling should be the same as any other bike with a true 73-degree head-tube angle with a 4.5cm fork rake. Nothing fancy.

Interesting comments about the down-tube appearing droopy. I can actually see that now and thank you for pointing it out. Again, this is why I’m not in the “big leagues” of design, ha ha!

No not at all. We all do stuff like that when we are trying new stuff out. For me the key thing is to always show it to people… Maybe its just my process but I find the more I show it to people, the more I can see those things. It is always an iterative process, I never get it on the first go.

@ Chris, at least I was close on the headset… seeing that I can really appreciate how integrated your components are Evan, super nice to see it taken there.

Interesting concept here, but I have a concern with the brake levers. When in the drops, I feel like it would be difficult to squeeze (like squeezing the top of levers off the hoods). Currently I can squeeze with my lower fingers which are positioned down lower on the levers. With your design, I would have to awkwardly reach my fingers up in order to get some mechanical advantage. I may be wrong here, but I would try to mock up a quick model with some resistance to test it. Any thoughts on how this would work in a non-electric shift version (how would the levers have to change?)

The seat post where it attaches to the seat is very large. It looks out of proportion to the seat and the frame. The seat post clamp is too conventional from what I can see. I would prefer more integration.

You know I am a sucker for the thin seat stays – those are awesome. The transition at the rear dropout seems a bit awkward. The chain stay is wide and it comes to a point. I know it can be made structurally sound, but I perceive it as a stress point. I know the trend has been for the tall “stiff” chain stays, but lateral stiffness is determined by the chain stay width. I know there is no room to increase width and I have always questioned if taller = stiffer.

The BB is awesome. It looks like I can get my hand through there. For funsies, I would like to see the crank with a hidden sprocket arm. Like C-Record.

I recently saw something that used magnets to hold water bottles in place. If it worked and the bottles don’t jump off when going over some RR tracks, I think those would better complement your frame.

While the heavily bladed forks are not my style, they are nonetheless very well done. The transition to the down tube is excellent.

Alright. The cockpit. I don’t like integrating stack height and reach with the stem. No worries. I also don’t like how manufacturers today integrate stems and bars. I actually change stack height a couple times a year depending physical condition and even to a much lesser degree, mental condition. If you are going to integrate, don’t hold back. Do all three – stack height, reach and bar width. Then integrate the LCD into the mix as an option.

Next is the shifters. I think they can me much more subtle. I know you probably want to highlight them, but I don’t need the +/- or their thickness. They could be just membrane buttons. I also question the reverse hinge. You are putting that thickness exactly where I want to grip the bars when I am in the drops. I can’t get my hand around it which would be important for my silly town line sprints where I fanaticize I am Cipo. I’m high on endorphins, in my fantasy world, and you would be harshing my buzz.

On a side note, I’d like to see some detail about the brakes calipers.

The stem is up a lot. But I like my stems going down. Looks pretty cool, the lack of a rear brake bridge is daring to say the least.

Pretty bold there 6! –
nice to see a bike concept that is both grounded in bicycle tech and goes forward and takes some risks. Usually you get one or the other.

Things that i don’t:
The stem - (other have said this but for a race-like geometry this thing should be more or less horizontal)
The bars -

I’m just one guy but I hope that helps. Nice work. Can’t wait to see the next evolution of you decide to take it further.
Also - nice presentation pages… I like the simplicity.

Thanks for the comments. The rather upright stem has some people concerned but let me assure you that the handlebars are in the same location and that fork rake is identical to a normal road bike. The bayonette-style fork just makes it appear that way. I’ve attached an image showing what I mean.

Although I’m incredibly tied up with Cerevellum stuff at the moment, I don’t see the project as being “finished.” It’s a progression and all of your comments are helping to make it better.

I’ve attached some STI levers to cowhorns upside-down and it does actually work quite well but the cables are all screwed up. Electronic shifting simply allows for ergonomics not otherwise available and opens the doors to a lot of things, IMO.[attachment=0]Rael_PG3_101310_core77.jpg[/attachment] 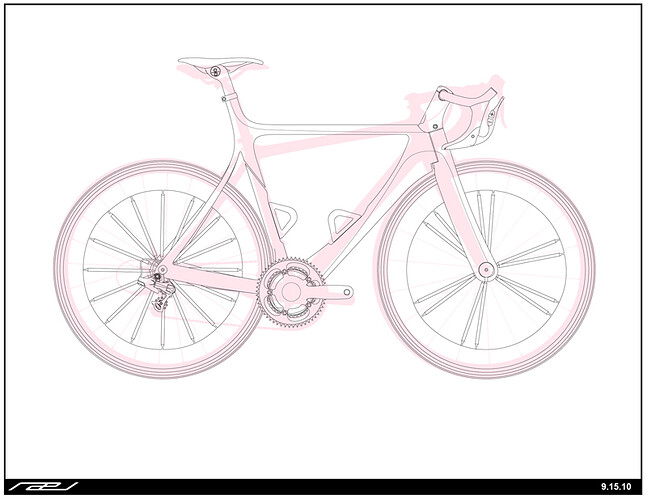 I’m still not sold there. What’d you end up with for Headtube angle? (I know we’re getting nit-picky here…)

The head-tube assembly is the same as that on the Blue Triad SL. The head-tube is in exactly the same location as a standard road bike, in this case with a 73-deg. head angle. The fork runs both inside AND outside of the head-tube which gives it the appearance that it is steeper than it actually is. This is also why the stem appears to be nearly vertical. By having the stem not only attached to the steerer tube but also sitting on top of the fork extension, the result is a much stiffer interface because it’s not hanging out in front of the bike as far.

You’ve got some really cool things going on with the dropouts and quick releases. How do you see that working? Pushbutton style like a wheelchair?

Just saw your concept on Gizmodo via Wired. Nice, congrats on the exposure!

Thanks, I’m a bit overwhelmed with the response. Sadly, I don’t think the viewers of Gizmodo are seeing the entire concept. For instance, one poster thinks that you can’t steer! Or that there aren’t brakes! ha ha

On a positive note, I’ve registered for Interbike and will be on display there this September.