I have a bicycle design concept that I think should be produced…by me, and am considering Kickstarter versus going the angel investment route.

A little background. I received a sizeable chunk of change from an angel investment group for my Cerevellum Hindsight 35 cyclometer/rearview camera system. So, I’m very experienced in what it takes to get funding and all that is involved. I’ve also designed three carbon-fiber bike frames for a fairly well-known brand so I know the engineering involved and have the connections to get the frame produced. All of the ingredients are here and I’m super passionate about this project. I believe I have a pretty innovative way of doing the fork/headset/stem assembly and also a unique aerodynamic hydration system. It’s all within the realm of real possibility.

Has anyone had experience with a successful Kickstarter project? I’m considering this versus going the angel investment route but haven’t ruled that out yet.

I’d post images of the concept but don’t have it properly protected yet. Think it’s going to be difficult to patent and might not even mess with that. Being the first to market could be the best approach and then license off the engineering parameters so other companies can offer accessory items.

Hard to say without knowing the concept.

But roadies do love their swag. And they are willing to pay for it. Aero and lightweight will cause them to open their wallets in a flash.

Why not pose the question on weightweenies/rodabikereview/bikeforums/thepaceline/etc.

I wouldn’t have thought an expensive item would be a success on Kickstarter (better suited to low cost, high volume), but a quick search shows a couple of funded kickstarter bikes:


This one has deposits as the reward, which my reading of the KS T&Cs isn’t legit: 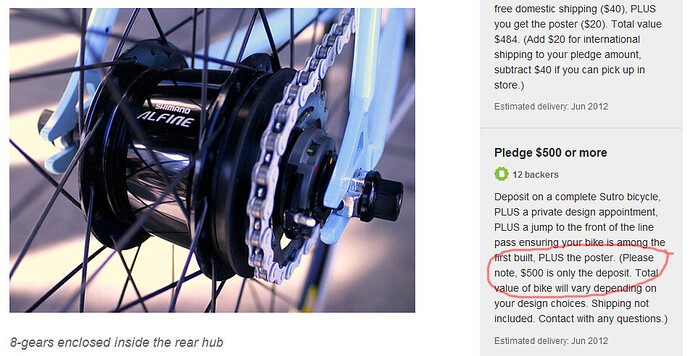 The more I’ve been looking at Kickstarter, the more I agree with the above sentiment. Building a bike company isn’t something that $10K will do. We’re talking at least a quarter of a million with well over $150K just in molds, not to mention inventory. When you’re dealing with carbon-fiber, the entry fee to get into the market is very high as compared to hand-crafting a welded steel frame. If I hadn’t sunk everything I had into Cerevellum, I’d have enough to fund the venture myself. Darn.

Sounds like a cool idea, Evan. It seems like there would be a lot of leg work though… finding a trustworthy/competent fabrication house, going through the UCI approval process, etc.

Why not just shop the designs to bike companies?

I guess it comes down to whether the benefit of running your own show is worth the cost of all the operational networks that an established company already has in place.

Either way, I look forward to seeing the bike someday!

Don’t know if this would help, but there’s a local builder here in Minneapolis making custom Carbon frames/bikes…

He may have some resources or collaboration ideas for whatever it is you’re planning. 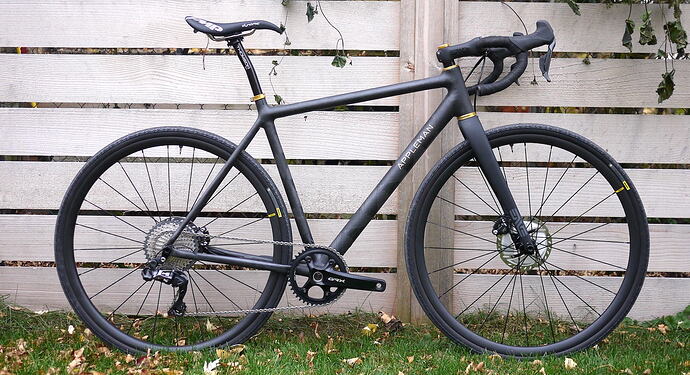 The brainchild of Matt Appleman, Appleman Bicycles has produced frames by hand since 2010. Every bike is designed and fabricated in-house with steadfast-design and painstaking-workmanship.

I would say you should give Kickstarter a shot… I had a successful project on Kickstarter.

I can’t say enough about how cool KS is. In my mind KS is the way for the foreseeable future to validate a product, gain capital without ending up in bed with controlling stakeholders and maintain control of a product and the ip. KS brings developers to the forefront and puts heart back into what has become a relatively cold and unforgiving system of consumerism. I considered the angel investment \ market accelerator approach and had some offers. I’m sure I didn’t make as much $ as I may have made going with the angels, over seas manufacturers, 3rd party distributors and retailers. I feel better about handling things myself and taking the opportunity to try my hand in the next generation economy that is budding in the crowd funding arena. Ill definitely do Kickstarter again and would recommend it to anyone who is serious about getting a product adopted.

I Imagine a world that is so well networked that any maker can be easily found by his or her global audience and supported enough to create a sustainable lifestyle doing what he or she is most passionate about.

6ix, you put photos of a bike concept up on these boards a while back with a different looking bb and head tube area, right? Same concept? Can’t you pitch it hard to Blue?

It’s actually the third version of my Rael concept that I’m looking to get made. The fork/stem/headset assembly is different from the version I showed on here a while back. I’m purposely not showing it.

Blue does their own thing. I might be able to license it to a well-known, former pro cyclist that used to have his own brand of bikes. We’re in talks about it, but if that falls through, I’m seriously going to consider Kickstarter rather than trying to go the angel route. It’s WAY too painful!! I’m pulling together mold quotes now so that I can figure out exactly how much I need. I would guess that I’ll have it posted on Kickstarter in about 6 months. Might integrate my Cerevellum Hindsight into it. 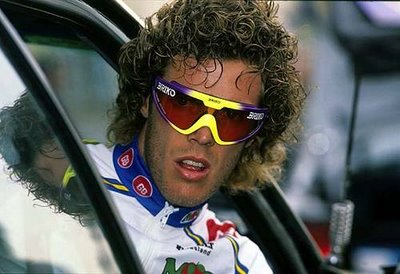 No, not Cipo! But that would be cool. What a stud.

Anyhow, I finally received cost estimates for the carbon-fiber molds. Really not that bad. Maybe $30K for 5 frame sizes. Then I’d need to find a manufacturer that can make custom carbon bottle cages and another that can make the unique stems but that should be pretty easy.

Still kind of considering the Kickstarter project. Would likely need $60K-70K in funding. The only hiccup is having a real-life prototype. I could have the frame machined in RENshape and then hang the components on it for a photo-shoot. It certainly wouldn’t be rideable. I haven’t messed around with the geometry. It’s pretty standard and should provide for a very neutral handling bike. Nimble but yet very stable.

Thoughts? Basically all I really need to do at this point is bust out an awesome CAD model of the medium or large size. With that, I can create the renderings, produce engineering drawings and have the RENshape model cut and painted. Nominal investment, really. Basically my time plus a couple thousand for the RENshape model.

You could vet your geometry and perhaps also create a skeleton for hanging Ren or clay off, by working with a local small custom frame builder. Even with the wackiest geometry and strange features they could get it done for under $5K and probably much less. Once you have a skeleton (or armature would be a better term) you could have machined foam or hell, handbuilt foam shapes around the tubes for a rideable, decent looking prototype.

I put in a few miles every year so I’ll give my perspective as a ks “investor”.

Quite frankly, I would be sceptical of a non-functioning prototype. Especially with a design that is not a part of the norm. Most, but certainly not all, cyclists are conservative with regards to design. We buy into the tradition of the the 2 triangle design that hasn’t changed in over 100 years. We have the pro peleton drive our purchasing decision, which has caused Grant Peterson to go somewhat batshit crazy.

Now you are asking me for $1500-$2000 (?) for a frame that looks good on paper. What happens on the A ride when I hit a pot hole and the new design for the head tube snaps like a twig? What are you going to do for me when I take myself out and the 3 riders behind me?

Granted you only need about 50 sales to cover your nut. That’s a pretty low number. But I think it will be a tough sell without a functioning part that has been thoroughly tested. While it will have a higher long-term capital cost and a higher upfront cost, you could have a mold made of only the medium before you make the other sizes.

If you can, get into contact with Ritte. They are a boutique builder and could have some insight introducing a small run to the public.

Also, since the law has changed to first to file, you should consider a provisional patent sooner rather than later.

And since you say a pro that used to have his own bikes, I gotta go with GL.

That would be good for you. He’s has a lot more cache since the LA thing “officially” hit the fan.

'course Lemond has his own issues. The whole sidestepping his agreement with Trek, selling bikes out of his garage to his friends for cash is a bit shady. (I have first hand knowledge of that issue…)

I’d second Ritte or even another custom builder (Appleman I suggested earlier does some pretty wild things), even Peacock Groove does some wild stuff with steel, might be able to help you get a functional prototype to “hang” some carbon on.

Thanks for the suggestions guys. Ritte, from what I remember, basically just buys an off-the-shelf frameset and wraps it in some snazzy paint and graphics. Appleman, while custom, does tube to tube and I need monocoque. It appears I’m just going to have to invest $5-10K to get one of the frame sizes completed so that I’ll have a real-world bike. Might as well since we’ll need to dial in the carbon layup eventually.

So, until I can drum up that kind of cash, the project is mostly on hold. I’ll still do the modeling and get it ready to roll though. But Kickstarter will have to wait until I’ve done some more market research and have an exceptional one-off prototype for testing purposes. Whatever the case, it’s an exciting project for me to work on!