I so want this toolbox! 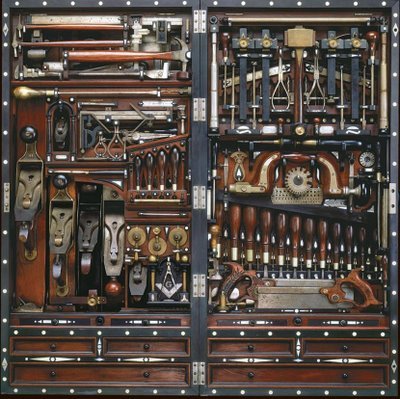 it looks lik something from a movie. really cool!!! 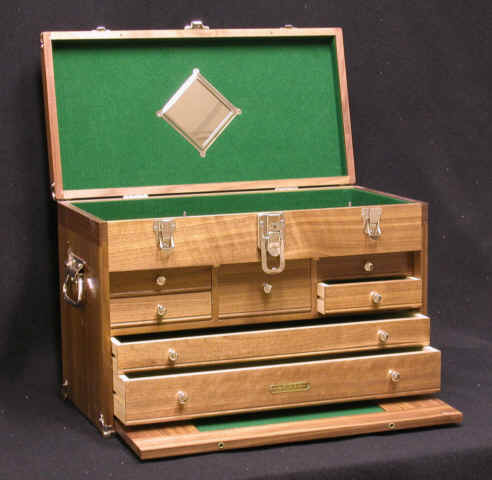 Kennedy and Gerstner make really nice machinist tool boxes. I worked at a machine shop for a few years and I always liked the Gerstners (pictured above). The machinist who owned them were very careful with them and loved them liked children. Very cool.

The picture you have looks like a clock makers tool box. The masonic symbol is also intriguing.

I get off on the craftsmanship of the tools probably more than the toolbox itself. Look at the saw in the lower right of the image. It has etched floral patterns on what looks like a hand made wooden handle.

It is almost too pretty to mess up by using it.

reminds me of this vampire killing kit…

(I believe which is now owned by Richard Garriott, or at least he just purchased one similar to this relic)

Wooden stakes. Mallets. Garlic. I get all that. But what is that ivory handled contraption on the right?

It ought to be a silverbullet pistol!

I so want this toolbox!

wonder how many here can name or use the tools shown…i can.

It ought to be a silverbullet pistol!

That’s what i thought too…but what is that hook on the front?

Its a flintlock pistol, the “hook” looks like decoration added to the barrel bed. The tube that is kind of hard to see is the barrel.

“The look of tool chests can tell us much about workers and workplaces. While their purpose is to organize, carry, and protect tools, this chest also suggests what a worker thinks of himself and how society measures the value of his work.” [my emphasis added]

Nice find LMO! That is awesome. A very cool story behind it.

That is what ID is all about. Cooler stuff than anybody else, that works great too!

Makes me feel like a follower having a big red metal craftsman for my tools.