Best thing I ever ate

So I am sitting here flipping through the channels and I stopped on one of my only favorite shows on the Food Network which is “The best thing I ever ate”. So as I have mentioned before and blogged about, I love to cook, love to eat, and would love to here about the best restaurants or things you have made that make you say WOW??!!

best homemade meal i ever had, though not cooked by me was:

i am getting hungry just thinking of it 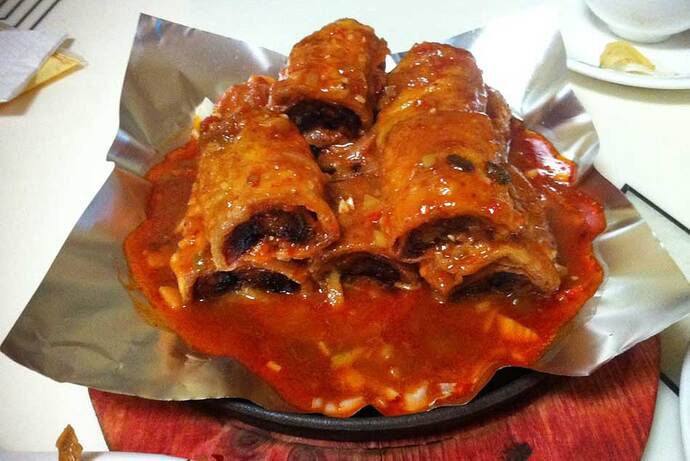 First thing that came to mind. My entire Mozza experience. 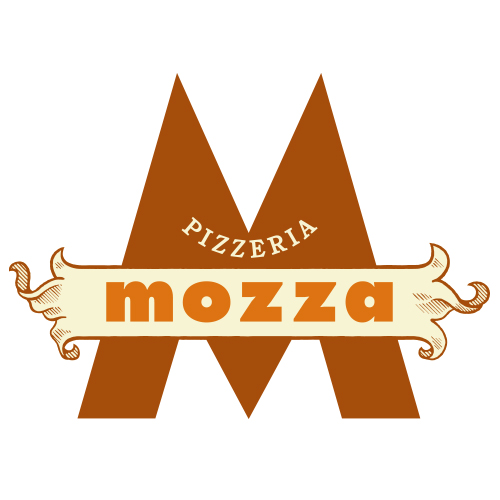 I too am a foodie, so this is a difficult one. I have quite a few, and lots of world travel certainly adds to the list. Toronto is also probably one of the most multi-cultural cities in North America, possibly the world, so is quite a good food place as well.

In no particular order-


Some are about the food plus experience for me…

Others more the food itself. Locally, there are some stunners. I’m one normally that values the food quality more than a fancy room (we have lots of those here too). Something about a place that can pack them in because of the food, not because it’s on a list of expensive places to be seen makes the foodie in me truly happy.

I could probably come up with more, and add some home cooking to the list, but all this typing is making me hungry…

I grew up in southern Indiana, pork country, but if you grew up anywhere east of Minnesota, and west of New Yawk you more than likely know what this is… .

Hint: Deep-fried breaded pork tenderloin, with everything, fries, and a few cold beers. The only thing missing is the cole slaw. The proper technique is to eat around the perimeter of the bun, and take the bun and everything left in it home for later. 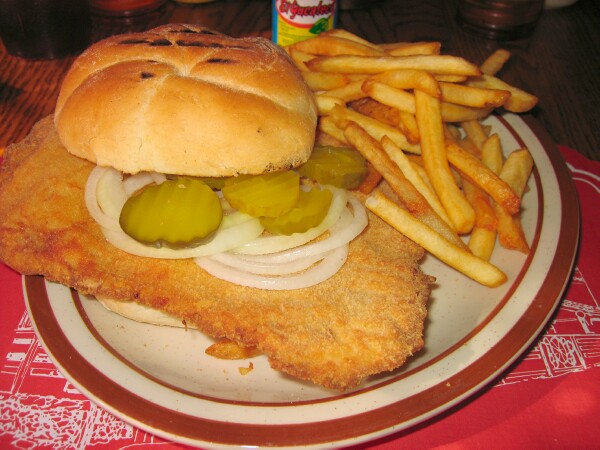 Of course, it would probably be easier to just inject the fat and cholesterol directly into the carotid artery in your neck.

I love this show too. They get to choose the best thing from a specific category so it’s almost impossible to think of one overall dish. Since I grew up in Kansas City, the first thing that comes to mind is Arthur Bryant’s Barbeque. KC has some amazing BBQ but this might be the best. It’s not fancy, not at all and maybe thats why I like it the best. Ribs, brisket, fries and a coke. Yes please. 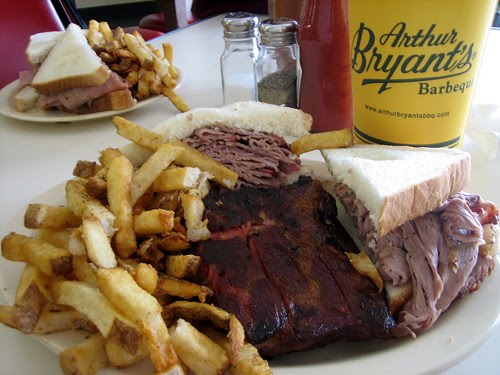 I am a trained chef and have worked in the culinary upper-crust for several years before I got into design. I still do some events and supper clubs.
So needless to say, I am very passionate about food and it influences my design work constantly. Cooking is just design with a different medium.

It is difficult to pin point the “best” thing as everything is so context driven and based on emotions surrounding the meal. A hamburger can be mind blowing at some place and just be another lunch at another place.

What stuck with me though is the story telling ability of the Swedish chef Mathias Dalgren. He does some beautiful food and I would probably mention his tasting menu and a simple dish of bread, home churned butter from raw milk and foie gras as one of the best dishes I have had. Through it he told the story of him as a kid observing his Grandmother baking and making butter, then serving it to him still warm.
To me, the story is essential to a great meal. A personal connection. Otherwise it is often just nutrition.

If I had to choose, seafood/fish. Having a shore lunch with fish caught 5 minutes previously is outstanding. I also have an excellent lobster bisque recipe. Breafeast out is also a favorite.

But all food is great, from a hole-in-the-wall falafel place to a 3-star Michelin restaurant. When I eat abroad, I rarely remember the the name of the place. Best sushi I had was in Encino. The best salmon was in Seattle (yes, a cliche). The best pizza was surprizingly in Munich.

I forgot, a cheeseburger on the grill rocks.

This is great!! Just what I was looking for when I put this post. I didn’t know if anyone would reply, but hey we all love food. Some of mine are a bit cliche as well, but a region does not become know for a food for no reason.

Those are just a few of my favorites. Lets keep them coming.

iab, I didnt know you were in Chicago? I have never made it to any of the places you mentioned, but i will have to try when Im there next.

The best ‘restaraunt’ food I have had was a small vietnamese place in Chicago called simply it. The Pho and Simply its beef is amazing! It is a traditionally marinated slab of filet mignon that is sliced onto a bed of veggies, and it just melts away when you eat it. Then when you are done you can get the deep fried bananas…Im getting hungry just thinking about it! Every time I go back to visit we have to make it point to have dinner there.

The best food I have had was also when I lived in Chicago. My friend was renting a room out to the sous chef at Alinea. He was working there for a few months to learn/work directly with the head chef. He made us something that I cannot even begin to describe one day we were hanging out. I seriously have no clue what went into it, but it was amazing! I always wondered how it was $200/seat at Alinea, but after that meal I know why. Its too bad Juan went back to Cali to open his own place, I was enjoying his expertise.

Having access to Grant Achatz’s sous chef must have been awesome. I’d love to eat there too but like Trotters, I can’t justify that amount of money for 1 meal. Unless of course its the client’s idea and they pay.

You really should try Rick Bayliss’ food (Topolobambo/Frontera Grill/XoCo). He is as good as Trotter or Achatz but a torta from XoCo is only $10. The real gem though is Patrick (I forget his last name) at Don Juans. An out of the way place with a horrible decor but just as good as anything Bayliss can do. Occassionaly he has a deep-fried oyster on a bed of spinach with what I would call a Mexican/French fusion bearnaise sauce (cilantro instead of tarragon?). $3 each but so worth the money.

The first time I ever had hours fresh seared Ahi tuna was at Roy’s Waikoloa on the Big Island of Hawaii. I’ve had it many times since, but Roy’s was still the best.

“Las Framboise” @ L’Atelier de Joel Robuchon in Las Vegas. It was a citrus dessert that topped off a meal that changed the way I look at and appreciate food.

The presentation was fantastic.

“Las Framboise” @ L’Atelier de Joel Robuchon in Las Vegas. It was a citrus dessert that topped off a meal that changed the way I look at and appreciate food.

The presentation was fantastic.

I don’t think I could pick just one meal, there’s too many amazing foods out there… here are some interesting ones off the top of my head:

A new one to me moving here to the UK is a good Sunday Roast - Especially at a pub that takes real care in the meal… it’s usually a big slab of roast pork, Beef, or lamb surrounded by Yorkshire pudding, potatoes, parsnips, gravy, and assorted veg. A good one is amazing!

some others would be a good steak (bife de chorizo) in Buenos Aires with peri-peri and caprese salad on the side, maybe a good Mendoza wine along with it. Why else go to Argentina?

Another amazing steak experience out of N Spain is a Chuletón, best found at Siderias. It’s a thick flavorful steak dinner at a hard cider house where you can help yourself to the drinks from giant 12ft diameter barrels. It’s a great meal, and it’s interactive! 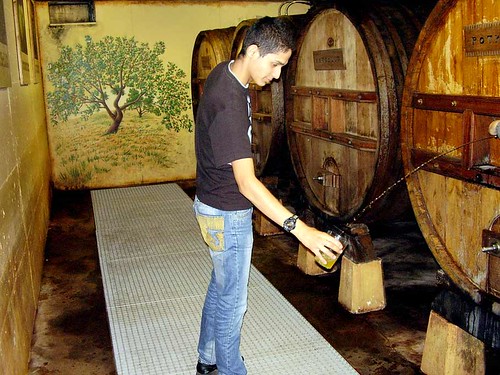 Justin - I’m out of NC too, and the BBQ pork down there is pretty special… especially the vinegar style (not the tomato sauce type out of some confused counties). I keep planning to have a proper pig pickin out here one of these days

Maybe my parents can send me some of that sauce…

tons of others, but I could go on and on…

I heading to Cali win country next week. I hope to have a lot to put into this thread. 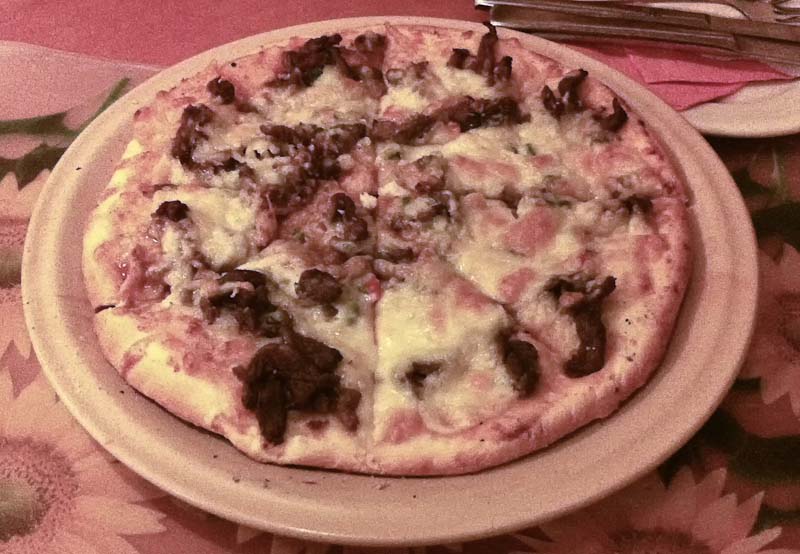 Bone marrow from Longman & Eagle in Chicago! I never thought eating out of a femur could be so delicious. Wash that down with an Old Fashioned and you are set. (I lifted these beautiful pics from the internets) 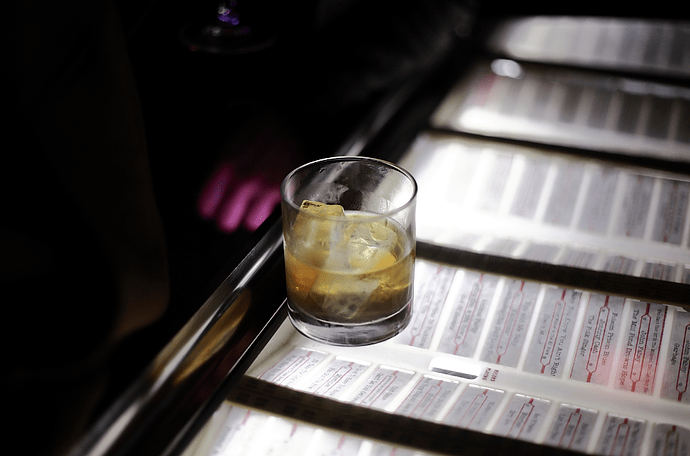 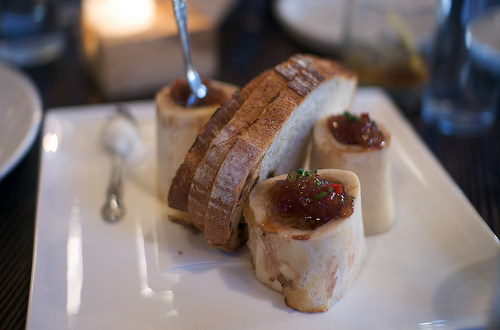