I’m working together with a new startup in the Rapid Manufacturing space. Nice people, would love to work with them. But I’m not liking their NDA much, as it has a one-way clause in it where they get to use any feedback I share with them. And since I have my own project in the same space, and also enjoy working with a couple of other startups doing similar things, I think I’ll be skipping this NDA.

Which made me wonder if any of you have ever run into the same problem? Or even better, if you have an example of a good NDA that is neither too strict nor too loose. If you do, please let me know! Thanks!

I have a mutual NDA that I paid a lawyer to draw up for me. It basically states that we will both disclose information for the purposes of the project and the project only, that it doesn’t constitute a contract, that neither of us will disclose until such time that information has been made public by the disclosing party, and that each party individually owns the IP that it discloses unless otherwise specified in a contract… IE, your feedback is yours.

I always keep in mind an NDA is only as good as your lawyer and size of your bank account when it comes to enforcing it.

I’ve created my own that I sub out if possible. Mostly just to avoid the hassle of dealing with back and forth.

We have a couple. The goto is whatever you do for us, we own. Typical with consultants, non-technical manufacturers. We have a mutual if they are letting us use their existing IP.

Most NDA’s are one-sided. Edit it to suit you and negotiate. I have to do it with almost every NDA.

Thank you all for chiming in!

I also have my own mutual NDA, which is pretty basic, and I’ve found one ‘design-sensitive’ company that offered me a great NDA. But regarding the NDA that made me reach out the collective Core consciousness, I’d like to dive a little deeper if possible. I’ve attached the clauses which made me really uncomfortable, would love to get your feedback on that.

In their words: I spoke with our lawyer and they said they can remove Clause 11 if you are uncomfortable with it. Clause 10 is pretty much the point of the NDA though, but shouldn’t be a problem if each party has good faith in the agreement. Does this work for you?

How would you approach a discussion on finding a middle ground? 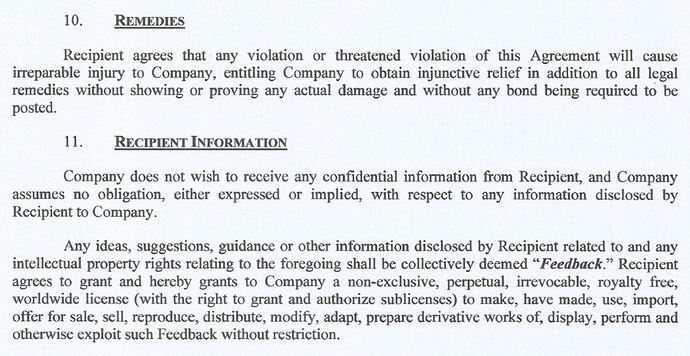 not what you asked for but perhaps valuable info,
certain liabilities go with handing out a legal form or contract so you might not get anyone here to send you an NDA (and you should consider not hanging out the one you finally settle on) DMI, IDSA or the european equivalents might be a better resource

do you have a lawyer? If you have serious concerns I’d consult with them. I have a lawyer that I use for heavy lifting if it is something I feel is beyond my redlining and sending back.

Thank you no_spec and yo!

Nope, no lawyer, nor the budget for one right now. But I’m glad this happened, as it is deepening my understanding of and opinion on NDAs. This document was especially helpful and succinct, so I’m leaving it here for other designers: https://axaxl.com/-/media/xldp/pdfs/loss-prevention-libary/dp_article_dos-and-donts-of-ndas_us_ca.pdf