Working on a 1000x600 pixel touch screen interface
Just wondering what the top fonts are for UI design. Are there any industry standards?
Any fonts to stay away from?
Thanks

I am thinking about using Helvetica or Whitney/Myriad pro

I know that typical web fonts are Verdana, Georgia, etc for there high x-scale, but I don’t know what the down sides of using something like a helvetica or Myriad pro are. The obvious would be that they are less legible, but they don’t seem to be in my tests.

Through doing this I realize my question is: Should I stay away from Myriad Pro or Helvetica, and if so, why?

Helvetica is tried and true for every day information usage. Look at nearly any standard regulatory sign out there and its usually some form of Helvetica. In the US, Highway signs and other traffic regulatory signs are transferring to Clearview Hwy as the standard font. If you want this one though, warm up your checkbook because she’s really really expensive.

I know helvetica is used a lot in printed information, but not so much in GUI’s.

Use a “humanist” sans instead of a sans that’s specifically been designed for on-screen use (screen font.)

“Myriad Web Pro” is a great example of both.
Gill Sans and Frutiger are nice classic humanist sans.
Georgia is a great humanist serif, great if there’s a lot of reading.
Clearview is really cool, and very well considered: http://clearviewhwy.com

I’ll keep these in mind.
Also, What’s your take on Verdana?

Verdana is another great one that comes pre-installed on Windows machines–that can be a critical deciding factor for a lot of UI projects! 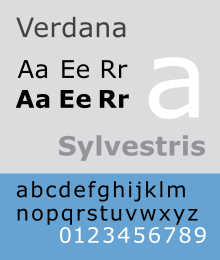 Verdana is a humanist sans-serif typeface designed by Matthew Carter for Microsoft Corporation, with hand-hinting done by Thomas Rickner, then at Monotype. Demand for such a typeface was recognized by Virginia Howlett of Microsoft's typography group and commissioned by Steve Ballmer. The name "Verdana" is based on verdant (something green), and Ana (the name of Howlett's eldest daughter). Bearing similarities to humanist sans-serif typefaces such as Frutiger, Verdana was designed to be readable ...

OK, if you don't have the time to create a font from scratch, we tell you how to pick the right one for internet usage.