Sorry if this topic has been covered before but I’m trying to get feedback or recommendations about the best computer to use as an Industrial Designer. Some background, I’ve used an iMac in school worked well for the small stuff. Most recently was using a dell (laptop inspirion 9400) for 2 years (then it crashed, quality product) running programs like Pro/E, Alias, Image Studio, Creative Suite, which I will have to run on the new machine. I know Apple has two programs that let you run Windows XP etc. and a Mac OS together (Parallels and something else), so if you’ve used them please give me some insight. Much appreciated for reading this and any thoughts on the subject.

You can’t go wrong with the macbookpro. Treat yourself to the 17 incher.

First off, thanks for the reply. Second, have you used the MacBook Pro to run these types of programs? Also, how has your experience been with using something like Parallel to switch back and forth? Any issues/concerns?

I actually got a MacBook with parallels desktop 8 months ago, but I haven’t installed it yet, so I’m afraid I couldn’t tell you.

I think your main concern is memory. You wanna have 2-4 gigs if you’re running 2 memory-hogging OSs with that software.

Get at least 2GB of RAM and you should be okay. 4GB would be better though.

I had Pro on mine for a while and I took it off because I was not using it. I also had a piece of FEA software that was particularly difficult on some of the older PCs in the studio and it ran well on the Mac. That is gone too and now the only 3D package I run is a light rendering package called concepts unlimited. Anyway, I have never had any problems with it at all and I predict you will love everything about it except the $3000 price tag.

Definitely, that price tag will certainly getcha!! I’m not really concerned with memory as the dell laptop I did own was a work horse and did everything very well. Except for the fact the very nice video card failed after only 2 1/3 years. Guess the main concern for me would it create problems switching back and forth, i.e. restarts, maybe its more of a question with Parallels or VMware Fusion. I will be looking at the new processors that just came out, but have heard on Apples site about the conflicting reports about which program works best…

I would suggest dual booting with Bootcamp (or whatever they call it now) rather then trying to run Windows + CAD software in emulation. I can’t imagine the performance being what you want/expect with 2 OS’s running.

I believe Dual booting w/ Bootcamp is what the Genius’ over at the Apple Store tell you to do, too.

what about tablet pcs? these sound so good but it seems like they are going out and people are stopping selling them. best buy doesnt have a single model available from anyone.

I’ve run some version of Dell Mobile Precision Workstation laptop for the last 5 years and have been happy with the performance and stability.

If you’re looking for a good deal on a Dell, check out the refurbished Dell Outlet online. If your budget is tight, it’s a great way to go.

Lenovo, who took over IBM’s thinkpad line have some pretty appealing notebooks out right now. Check out the X series–ultra mobiles, thin and light weight with long battery life offering both regular and tablet PC’s.

Also, the mac book pro’s are also very good. Depends on your preference of operating system. Parallels would probably be your best bet over boot camp if you wanted to run both (I only say this because with bootcamp you would have to restart the computer everytime you want to run windows)

I recently bought an ASUS M50SV, which is a nice laptop, but after having it for a couple of months I am not sure I would recommend it as a ID laptop though. Something more durable like the mac pro or lenovo would be a better choice.

And you can check out Voodoo http://www.voodoopc.com, which is expensive, but they have the clean design of a mac but for a PC.

Edit: Forgot to mention, if your going for a tablet PC I would seriously consider the Motion Computing LE1700. I’ve been looking at getting one for the last couple of months. Wacom digitizer (but not a sensitive as intuos or cintiq) in a slate format.

Well, thanks for the suggestions. My budget is really open ended as I always spend the necessary money in order to get a better product that will last a long time. Granted it is a laptop however I would expect to update this only 4-5 years, afterall if the programs dont change so much I wont have to either. Has anyone on this thread used the VMware fusion at all? Just curious as I’ve not heard of bootcamp…so I dont know too much about these dual OS programs. Looks like a Mac is a good way to go so far…thoughts…

RE: VMware fusion and bootcamp

I bought a MacBook Pro a few months ago and I absolutely love it. But I didn’t really like the idea of having to reboot each time I time wanted to switch between OS-X and XP, so I bought VM Ware Fusion. I feel a little dumb for not having fully considered the ramifications of doing that. When you boot up XP with Boot Camp it gets the entire processor. When you boot up XP in VM Fusion it only gets a portion of the processor. Duh. So when I’m running Rhino I get some lag when I’m in ghosted …

I have no experience with using either, but I found this while browsing the software and technology section. Hope it helps.

its sensible to get a rip snorting desktop for half of the price youd pay for a mac,

I already have a sweet desktop and am going to be purchasing a laptop, my dads trying to push me to get a dell because its half the price.

the world is your oyster - you cant really make a bad choice - if you go for windows PC you have solidworks/rhino/CS3 and a whole host of others…if you go for a mac, it might just take a little longer to get used to a program thats called something different but does the same

Thanks tupperware, but I was really asking about Laptops. As a freelancer I have to be mobile and versatile so a desktop will not work. Also, I’m not sure if you read the beginning of the thread but I purchased a Dell, that failed after 2 1/3 years. Not the performance I would expect from spending over 2 G’s. So, why not spend a bit more for quality and lasting power. Also, the reason I asked about VMware Fusion and Parallels is to use all my apps on the same computer or really how the performance is associated with those two programs, versus running misc. apps I dont know on a mac. Hope this helps you in your decision on your next purchase and thanks for the input.

CHeck this out from Lenovo (via Engadget): - 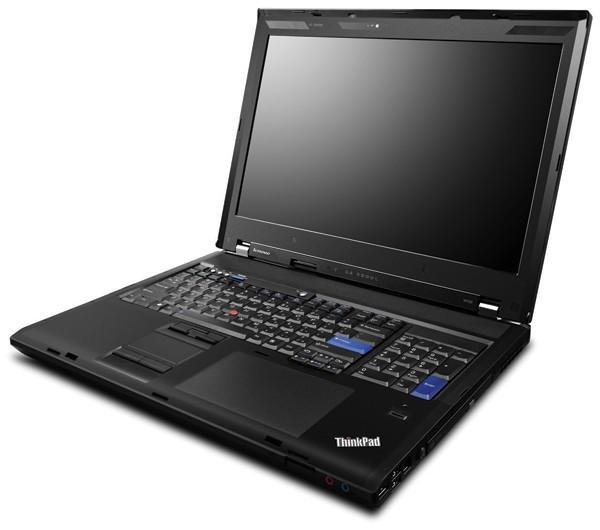 Lenovo intros the monstrous ThinkPad W700, and we get our hands all over it...

Like your laptops to be over-achievers? Like, the really annoyingly stacked variety of over-achiever? Enter Lenovo's newest outrage -- the ThinkPad W700.

I can’t see that small of a digitizer space being all that useful. Nor can I see spending such a huge premium on it when a 4x6 Wacom is easily portable and sub $100.

I’d get a Macbook Pro over this but I think it’s still an interesting concept - at least they’re trying to design a laptop with designers/engineers in mind.

I’ve always liked Dells. I just ordered a new Dell Studio 17". The thing I like about it the most is the fact that there is a number keypad to the right of the regular keypad. Its a small detail, but if you do a lot of Pro/E its nice to have, rather than pecking at the numbers along the top. I loaded it to the gills with RAM and memory etc. and it came out around $2,100.

The only thing I’m a little scared of is Vista. They don’t offer XP.

I actually just picked up a new laptop - I did a lot of reading up and comparing of brands, focusing more on processing power. The laptop I ended up getting was a Clevo 570TU - the company OEM’s for brands like Alienware, Sager, sometimes Dell and others. Small re-sellers also buy bare laptops and add in upgrades you choose.

For about $2700CDn I had a 17" Core 2 Duo laptop with a 1920x1200 LCD and a GF9800M, full keyboard with the numpad. Few other brands had that resolution available, and only Dell carried higher end graphics.