Couple questions about this…

What’s type of plywood is typically used (if any) when making furniture and more importantly, how thick is it?

Also, I’ve seen reversed molds made and plywood sheets glued together then clamped. Is this the way most prototypes are made?

Finally, any good references anyone can direct me to would be appreciated.

Here is a good book on the history of plywood forming:

There are 2 different thicknesses to concern yourself with: the thickness of the plys themselves and the overall thickness of the part (and how many plys actually make it up). What works best would depend on your design, like how tight the radii are, etc. The tighter the curves, the thinner the plys you’d want to use.

I made a bend-wood piece and used a Urea Formaldehyde Glue between each ply. You can’t use ordinary wood glue because it flexes too much. The Urea stuff takes some care in handling, but you’ll get great results. I was doing some pretty simple curves, so I made an MDF form and clamped 1/8" thick strips of cherry to it, with Urea in between. When it came off the form, I could stand on the part it was so strong.

Thanks for the info. I’ll check out the book.

there is 1/8" plywood thats good for gentle curves like seats and backs. It’s strong enough with just 3 layers to hold up if the rest of the support structure is sound.
There’s also something called “bending plywood” availble from specialty woodworking stores. it only has 2 ply’s or layers - one thin and usually a visually appealing material and the other is thick and cheap. it’ll bend very tightly against the grain of the cheaper ply.
I recommnd “Gorilla Glue” or epoxy because of the long set up time,allows the clamping process to be more exact, plus the outstanding strength.

I’ve worked on a few plywood designs and toured a couple of factories in China. I learned a few things:

Here is a video I shot at one of the factories. It’s a little crunchy because it’s been passed through a couple video encoders to get it onto YouTube: 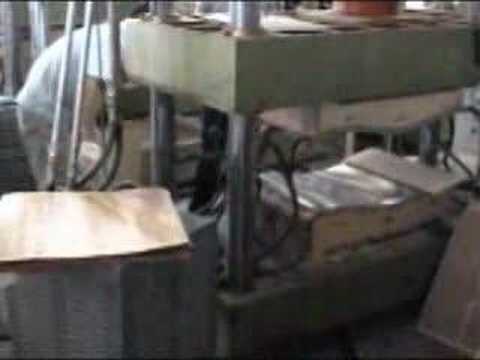 That was a very interesting video.

We have been having some problems with the samples we have recieved from China of our plywood design. It cracks and warps, probably due to the difference in humidity.

Have you had the same issues with your samples?

Any leads on other plywood factories in China would be greatly apreciated.

I’ve seen some awful bent plywood products on the market. Most of them are mass market products that tried to get cheap by using thin wall plywood.

The worst I’ve seen was the Micheal Graves office desktop set at Target. The stuff was terribly warped and they pulled it off the shelves after a few months. It was only about 5mm thick and the finishing work was rough.

Because wood is naturally hyrdroscopic it will absorb moisture. The various layers of plywood is theoretically suppose to stabilize the warping, but there are many conditions that can affect this:

The best way to stabilize bent plywood is to use more layers. It seems like thicker plywood rarely warps as much as the thinner stuff.

I’d hate to recommend a factory because I visited them several years ago and they may not be such a good resource anymore.

I’ve seen footage of a plywood furniture factory in Poland (or maybe Denmark) that seemed to have pretty good craftsmanship. I know Blu Dot does some nice work in that realm. In fact, they recently had an exhibit at the Walker Art Center. Probably helps that their studio is close to the museum…

I agree that most of the low-end bent ply products on the market are utter crap. Too many corners cut to keep the price low. The most apparent flaws are poor finishing of edges and cheap veneer that’s been cut poorly. High quality veneer, especially for the faces, makes a world of difference.

The book “Bent Ply” recommended above is a great into to bent ply furniture, and the pictoral in the back shows what is pretty much industry standard for bent ply production.

I think that birch is most commonly used for inner plies, but many different things can be used for face plies. Birch and walnut are probably most common for faces, such as on Offi pieces, and I’ve seen cherry on a few Blu Dot pieces. I’ve seen luan/meranti used for inner plies on some CB2 pieces with melamine faces. There’s not a lot that won’t work, but some species are better than others.

Forms/molds depend on what you are making, and a little ingenuity can go a long way if you are only making a few parts. Production work typically uses heavy molds that press the veneers between two or more mold parts with a hydraulic ram. This is also commonly used in conjunction with radio- or microwave-activated adhesives:

Prototypes and small scale production of small(er) parts can be achieved by clamping the veneers to the outside of a dedicated form with hand clamps or vacuum bags. This is normally used with hand-applied adhesives appropriate for the application. 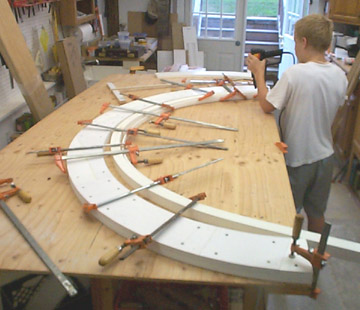 I’ve seen some more complex bent/molded ply products on the market recently, being bent in more than one plane. I’m not certain how this is achieved, but it can be done.

We have been having some problems with the samples we have recieved from China of our plywood design. It cracks and warps, probably due to the difference in humidity.

Sounds like they may be trying to actually bend plywood, rather than laminate it in into its final shape. That doesn’t really work, because the plies need to shear relative to one another to go around a curve- if they can’t, they will split to relieve the stress. Humidity shouldn’t be causing big problems unless they have really poor (or no) moisture control. Sorry I can’t recommend a better factory, we don’t do any bent ply stuff really.

Has anyone ever using bent plywood with electronics? Can anyone reccomend minimum radii and thicknesses?