Before the iPhone: Springboard

I didn’t have one of these but I did have a Palm. 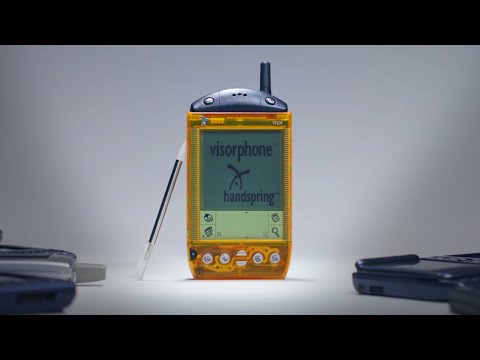 TLDR version: they had no power or leverage with the carriers so they had to let the carries boss them around if they wanted them to carry Palms, vs Apple had already established the iPod and hundreds of thousands of customers with iTunes and said “if you want our iTunes customers, you do it our way”.

Thanks for the nostalgia! Good video. I miss parts of the 90’s.
I had one. It was trans white. Entertaining for a while but just too tedious to maintain. Everyone loves the idea of gadgety devices that have cool slots for add-ons but its just unmanageable after the novelty evaporates. I never knew if it had internet connectivity. I think I had the camera module and maybe some extra storage.
Who did the ID for the Treo, was that IDEO as well?

I won one at a raffle, hardly used it. I lost it within a couple of months, never found out where it went.

I had a version of this I think. Handspring Visor Edge. I still have it someplace with the box. As well as a Sony Clie. Those devices were truly amazing back in the day. Not super useful, but mostly due to lack infrastructure (wifi, data plans, etc.) But still… amazing.

My Dad had a Nokia something prior to all these with a pen and RJ-45 phone jack built in, I think I might have that someplace too.

Client: Handspring, Inc.With a design that is thin and beautifully done, the Handspring Visor Edge is a handheld organizer dressed in nice chrome details. It runs the Palm OS with 8 MB of memory, rechargeable batteries and a slot with which the user... 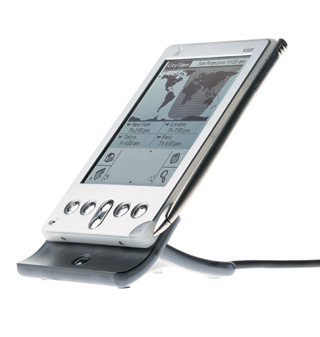 I had a similar white Palm from that era… not that exact one. It didn’t take for me either, but for sure could see where it was going. It is all relative and it’s easy to think smartphones just popped up fully formed, but there was so much experimentation and failed products to get there.

I had a similar white Palm from that era… not that exact one. It didn’t take for me either, but for sure could see where it was going. It is all relative and it’s easy to think smartphones just popped up fully formed, but there was so much experimentation and failed products to get there.

Yeah and that sentiment really comes thru in that video. I admire how they seemed willing to try things at Handspring; the design choices made by the UX person taking screen taps to hard keys was one interesting point. It really seemed like they were having fun.

Also nobody has really cracked the ‘stylus’ issue yet but could be argued that Apple Pencil and Surface stylus are also standing on the shoulders of these humble needles from the 90s.

Great point RE stylus. It was the right solution for a different form factor.

I still don’t really like handwriting with an Apple Pencil. I think the handwriting thing was too much of a commitment to a notebook like experience. Though it worked pretty well on the palm of you taught yourself to write letters they way they wanted you too.

I thought the most important point in the video to me was how Apple had built up this loyal customer base with the iPod and iTunes and that gave them the power to do what they wanted with the iPhone and push the carriers. Rennet how big a deal it was that the iPhone had no carrier logos? Most phones I had prior had a carrier logo somewhere on them (my blackberries didn’t though)