Now, I consider myself to be a huge fan of all kinds of beers. I don’t turn my nose up at Miller Lite, and I always enjoy a Delirium Tremens. I’m also aware of many of the subtleties of brewing and consuming beer. Temperature, aroma, the pour, all go into making the beer experience great.

However, I saw a commercial for Sam Adams last night about a beer glass specifically for Sam Adams Boston Lager. (After looking, this may not be very new at all)

This obviously isn’t a new concept.

But, if every beer needs its own glass aren’t we going to reach a tipping point? Why would bars want to stock 50 different glasses for specific beers? What’s wrong with the classic pint glass? Or Pilsner glass? And is this really necessary? Sure, you can probably taste a little difference between how it’s poured, but can everyone?

It’s just an extension of the brand IMO. Almost every beer at big bars does have it’s own glass, even if it’s just a logo printed pint glass.

If a few more people want to try Sam Adams because of the snazzy new glass, it’s probably a good way to spend some money.

I currently live up the street from the Sam Adams brewery and have been on the tour way too many times, and have even meet the brewers. In my opinion the glass is mostly marketing but does have a lot of thought behind it. It uses many of the ideas from other wine and beer glasses to best bring out the beer’s aroma and flavor. However from an engineering stand point I think it is too top heavy, I’m always worried that I’ll tip one over.

Also Sam Adams brewery has won more beer awards than any other brewery in the world (they even have an award for having the most awards), so I guess its ok for them to have there own glass.

mmm… all this talk has made me thirsty

I’ve got no problem with Sam Adams. I actually drink it all the time. I guess I’m just wondering why every beer manufacturer would want their beer served in their own glass (beyond the branding/marketing aspect of it). And how they expect every bar to afford so many unique glasses.

I wish I lived down the street from a brewery… well, maybe I don’t. I doubt I’d ever get anything done.

There must be some kind of incentive for the bars to buy these… maybe they are just freebies for the bar, or sold at price? I think bars that sell lots of certain brands of drinks get free signs sometimes

I kind of like the glass, to me it definitely makes the beer seem much more impressive than what I think of as a normal Sam Adams pint, though I don’t know if I buy all the reasons. As far as branding, you can tell a Chimay goblet from across a bar, with time maybe this one too

In France, different wine bottles are branded and are only used for wines from certain regions. Same with the glasses for wines and other drinks… some are to keep the vapors in, like a warm cognac that can make you feel the alcohol just from taking a deep whiff

This is just plain stupid. The ad should read like this. 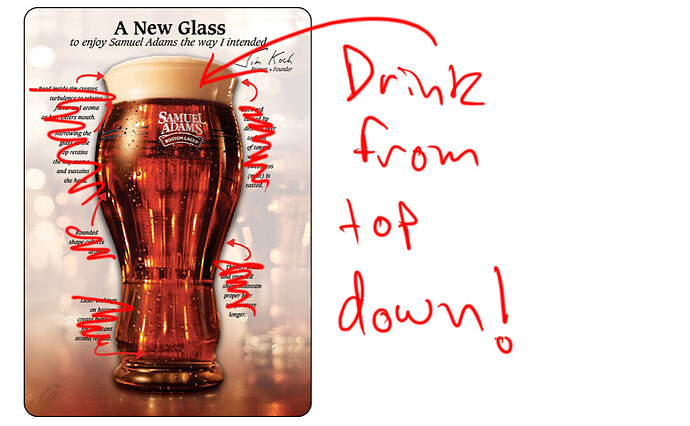 I never see a beer glass in side view. When viewing a glass of beer how often do you really not see it from top view with your mouth on the object. If your answer is often, then you dont know how to drink.

I would throw a hissy fit if I ordered a Stella and it didn’t come in a Stella glass… an outrage!

Maybe the commercial is taking it too far… bit IMO there are a bunch of different glasses already for different types of beers.
ie. pilsner glasses, pints or goblets. 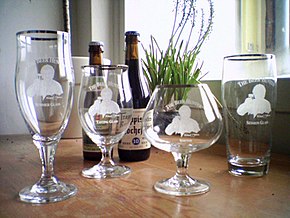 Beer glassware comprise vessels made of glass, designed or commonly used for serving and drinking beer. Styles of glassware vary in accord with national or regional traditions; legal or customary requirements regarding serving measures and fill lines; such practicalities as breakage avoidance in washing, stacking or storage; commercial promotion by breweries; artistic or cultural expression in folk art or as novelty items or usage in drinking games; or to complement, to enhance, or to otherwis...

Definitely a marketing ploy… but the brewery is fantastic. Free samples!

We have a new guy in marketing that used to work at Labatts. The brewers give these glasses to bars for free. It’s all just advertising. The reason they are different is just to make them more distinct. We see a beer in a glass with a stem and we immediately think Stella. It doesn’t even need a logo.

As my marketing friend said, these are ad companies that also make beer.

Certain glasses do enhance the experience. The Pint is actually the worst shape because the aromas escape so easily. When I’m drinking any unibroue, I need a flying U glass:

My favorite beer glass is the Kwak glass. It is a tall beaker with a spherical bottom and a weird wooden handle/holder. There is a story that goes with it:

“In Napoleon’s time, Pauwel Kwak was a brewer and the owner of the De Hoorn inn (near Brussels). Mail coaches stopped there every day, but at that time coachmen were not allowed to leave their coach and horses,” “As a result, the inventive innkeeper had a special Kwak glass blown that could be hung on the coach. In this way, the coachman had his Kwak beer safely at hand.”

The sam adams glass seems like a bunch of marketing stuff.

As far as the bars go, I know some bartenders that like to use them to keep track of what your drinking. One less thing to worry about.

Nice point, I hadn’t thought about that. It would make it easier on a busy night. 'Nother Sam Adams? Don’t mind if I do.

Ok I am going to go out on a limb here and say that there might be some truth to some of these glasses. I myself have to say that I am a big fan of a well-crafted beer. I am talking a nice IPA, a Sam Adams, Anchor makes some good ones…I could go one and on. I like many beer conasur (or how ever you spell it) have found that beer is much better in a glass than it is in a bottle. This not only applies to draft beer, but also bottle beer poured into a glass. The aroma of the hops and the taste of a good IPA in a glass is no different than a nice wine in the proper glass. So I think having glasses that hit those notes of the beer is not that far off.

That being said I do not think that ever beer brand should have its own glass. I feel that it should be no different than wine where every verity of beer should have its own glass. Example Lager has its glass, Hoppy beers have their glass, porters have their glass, and so one. This makes much more sense to me. The branded glass is just that, all about the brand and are intended for college kids to steel and use at home. (Which if you think about it is the best way to get your brand in the hands of one of your biggest markets.

I think it’s great. The laser etching at the bottom will have the most effect.

From a marketing perspective, I think it’s right on. They’ve always been about passion for quality, and the thoughtfulness behind this design reinforces that perception. I think more people will drink Sam Adams as a result, regardless of what glass it comes in.

As a side thought, I think its interesting how much the brand is about the passion of it’s founder/owner. In this respect, they’re very much the “Apple” of beers. I’m beginning to wonder if it’s impossible for companies to have such singular focus without singular leadership like this.

I’d say I am about 50-50 on whether I like receiving a logo-ed custom glass when I order a beer. Sam Adams is a good beer, and I like it, but am on the fence about advertising that I’m drinking it. To me, it has vague feel of American “corporate” big beers like a Coors, and less of a hand crafted micro brew. Maybe if it were Sam Adams special blend or a premier line, or the logo was a little more clever than just stamped on? I would much rather advertise to the bar that I’m drinking something a less common than a standard Sam Adams, though the glass does seem enjoyable to drink from

I’d say I am about 50-50 on whether I like receiving a logo-ed custom glass when I order a beer. Sam Adams is a good beer, and I like it, but am on the fence about advertising that I’m drinking it. To me, it has vague feel of American “corporate” big beers like a Coors, and less of a hand crafted micro brew. Maybe if it were Sam Adams special blend or a premier line, or the logo was a little more clever than just stamped on? I would much rather advertise to the bar that I’m drinking something a less common than a standard Sam Adams, though the glass does seem enjoyable to drink from

I have to agree here. I like Sam Adams, but I would also consider it a mainstream corporate beer. Their seasonal brews are good, but it is the beer that I will drink when there is nothing else. I would much rather advertise me drinking a Smuttynose, a Hop Devil, or an Anchor Liberty.

I came across these today. These are glasses that are filled with a Bacardi Rum drink and sold with a lidding stock on the top to seal it. This is a great way of connecting the brand with the glass as they are sold at the same time. 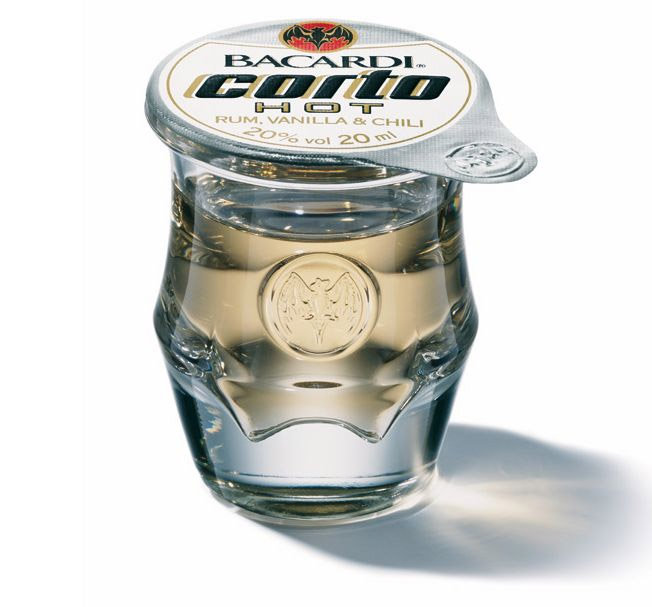 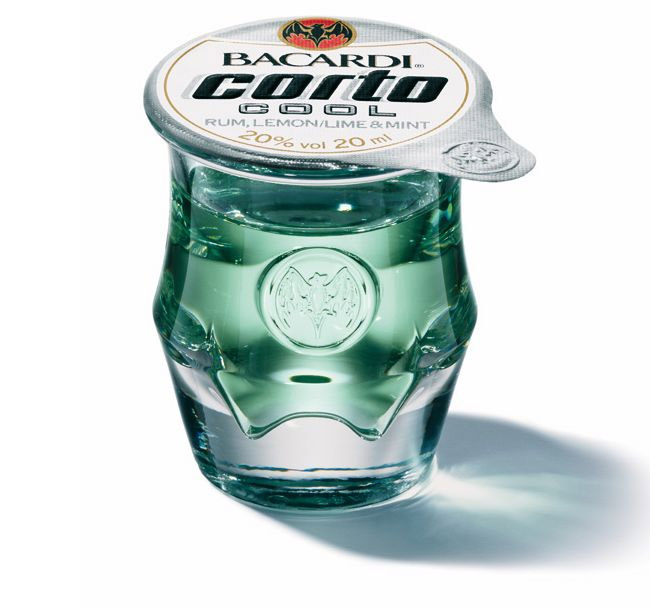 Those are very nicely done. I wonder if I could get a pack of those to keep in my desk drawer at work…

edit: something strange is happening with my posts, it’s like I’m going back in time… I was referring to those shot glasses posted after this post.

Those glasses as a package are pretty cool

I saw almost the exact opposite on a flight last week - alcohol shots served by the flight attendant in pouches, no bottle or glass whatsoever. I tried to find a picture online but can’t find anything