People have thought about re-using bags, but they don’t have one when they end up shopping, so I thought It’d be perfect if bags were stitched in to clothes/ accessories such as ipod covers/wallets etc… that you might carry around almost all the time. The 3 items in the picture are examples for the concept…

So, if you are wearing or carrying any of the items, you can avoid some plastic!

With awareness of environmental hazards growing everyday, I think this idea would be well received by customers and I think there is huge scope for marketing it…

This is my idea for replacing shoping bags… in less than an hour! 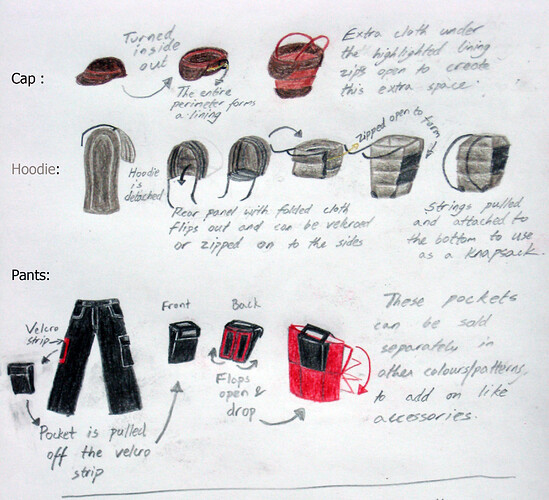 So all I have to do is takeoff my pants to carry my groceries home!

brett, don’t worry you don’t have to take off ur pants… the pockets detach!

and zippy, this was an alternative just to carry stuff back from the shop… so vegetables or eggs could be put in a paper cover if you had to take them back home… point of the bags here being, it would make it a lot easier to carry the stuff…

brett, don’t worry you don’t have to take off ur pants… the pockets detach!

and zippy, this was an alternative just to carry stuff back from the shop… so vegetables or eggs could be put in a paper cover if you had to take them back home… point of the bags here being, it would make it a lot easier to carry the stuff…

What material will be these bags, if fabric they had better be silk or nylon because of bulk then again in my little test even nylon bulked up pretty well. Plastic is out, nothing like a bit of plastic on your ass to make it sweat.

While I was designing it I was thinking it should be something synthetic so it can fold easily without being too bulky, so if you found nylon to be very bulky, I guess we’ll have to find a special material from the R&D guys…

and about the layer of plastic IF the pocket is in the back, then it shouldn’t be much different from keeping a wallet there… and it actually might provide a softer seat… ;D

Well, I wouldn’t go so far as to say plagiarist, it my have been unknown to you, but I have seen the idea before as well, outside of the competition. My problem with it, are you always going to be wearing your bag outfit?? Is every outfit you own going to be a bag outfit?? I doubt it. I like the idea of having a grocery bg stowed away in yor laptop bag, briefcase or purse, something you have with you all the time.

I wasn’t aware of it before the competition, no, but I do object to someone using more or less the exact same design in the same competition, when all previous entries are there for all to see

I wasn’t suggesting that this was the only solution to the problem but that it might be a very implementable one, given that the way forward seems to be market-led. If we can start to get people to appreciate that it is better or even ‘cool’ to use them instead of disposable ones, then surely that is a good thing. My problem with the wallet-bag was that the nylon bags can fold up small, but not that small - I know all the loose change takes up enough room in my wallet without a bag as well.

P.S. could you send me a link to this pre-existent one, I’d be interested to see it!

Hey i have to say it was not the best thing to read about my design first thing in the morning!

Hamish, if you really did post it before me, i’m sorry if you actually did the same thing… but for me my idea started out as a cap first then I realised you wouldn’t have a cap with you all the time, so I thought I’d just use the concept and put it in other items of clothing and accessories as well…

Ok, sorry, didn’t mean to have a go at you if you didn’t see it before…but you gotta admit it’s pretty annoying when you post an idea and then others post the same thing a day later! Oh well, theres at least 3 of us (PockIt as well) that did pockets coming out of trousers (or pants for the Americans) so it just shows its a good and natural idea that people can relate to

Hehe… its probably the first design that i’ve ever posted on the net but i know what you mean. There have been things that i’ve designed and then read about n stuff like that… yea sometimes ‘annoying’ is an understatement!

I just can’t imagine wearing a bag pocket every day (which would be what’s required for the convenience we are looking for) Seems bulky to attach to my body, but I am a girl. I imagine myself taking the bag out of the pocket, and then never putting it back in the pocket when I’m done.

The concept behind this trend is good though, a way for you to have a bag with you at all times, but perhaps there’s another solution that goes in a different direction than clothes. Cause I have to say, I don’t want to wear a bag.

another case of entrants not bothering to look at others entries first. Have had the same problem wih angryconsumerisms one and mine. Melovescookies didnt post his\hers cause it had been done and imo the presentation on that was again fantastic and could of easily been a hot contender, so kudos to him\her for actually the rules.

Lou, I can imagine you might not want to carry a bag around all the time, but what if it was a made of a synthetic material that was extremely thin but durable? you wouldn’t even know! it would be lesser than the difference between jeans and linen pants!

Have you ever seen muslin cloth by any chance? maybe we can do something thinner than that! (I’m an engineer, so i know its very possible)

personally I think I would remember to put the bag back after emptying it, cos I’ll remember not to throw it in the garbage. I really think cloth will have this effect.

Feltazar, to be completely honest I am new to this website and wasn’t familiar with the layout… I’ve never really posted stuff online before and also I didn’t see any list of rules that asked us to look through stuff already done previously…

Now lets focus on the other stuff instead of just the pants, the 3 items were only examples. I did only the basic items of clothing, cos I was running out of time! Hamish’s and my pants were ridiculously similar, so I really apologize… but try and think about the other stuff, the hoodie, cap or laptop bag/ back pack and the other stuff… I really think they’ll be great!!

of all the trouble , why not just do a portable stick on Bag (folderble) in ur cap , pants , t , etc… to have it there . makes life easier in a way u can just tear it off if u dont want it there…( just a suggestion )

Dig through the entries to the Get rid of plastic bags 1HDC. There were a couple of entries that integrated bags into clothing.