I was wondering if anyone could help me.

For my major project at university I am designing a new pair of badminton shoes with a few new/redesigned features.

One thing I am struggling with is to decipher what material the out sole is made from.

I’ve gathered so far that it is a rubber.

I’m confusing my self now though as there just seems to be so many different rubbers , i thought it was as simple as natural rubber or synthetic rubber.

The sole also needs to be a non marking rubber as it is to be used indoors in sports halls.

Thank you for any help

I’ve included a few images as reference for people who don’t know what a badminton shoe looks like. 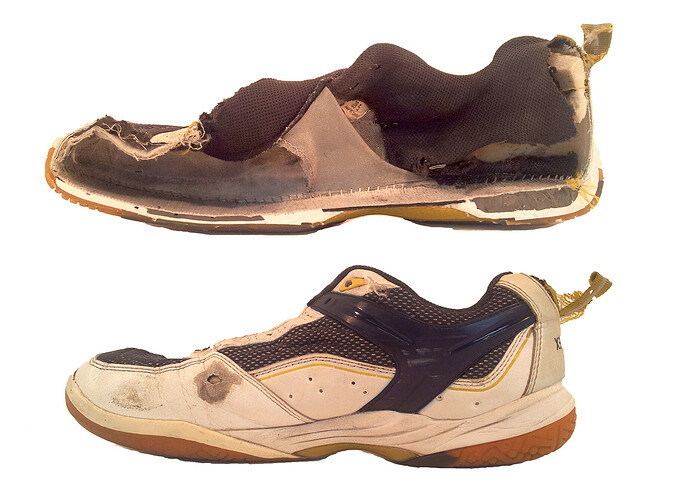 On a standard coloured rubber outsole I believe that it is made non marking by injecting nylon into the, which rubs off before the carbon leaving no marks on the floor. Although a gum sole would negate this. I believe the gum works by melting slightly to create grip on the wooden floor. The mid sole will be EVA. Don’t take this as gospel though as it’s based on some very old training sessions back when I used to sell trainers as a Saturday job. There are far more knowledgeable people on here who will be able to confirm/deny my allegations.

There are essentially two different types of non marking synthetic rubbers, and an infinite amount of compounds. Essentially the only thing to really know is that the softer the durometer, the stickier the rubber is (it also wears out faster). The harder the duometer, the longer it lasts. Don’t get hung up on the details though.

thank you for the help

what are the two types of synthetic rubbers? Is polyisoprene one of these?

From reading around it seems that rubbers that have a Shore rating of 70A are the most common used in shoe soles with natural rubber and isoprene fitting into these categories with a minimum of 40A and maximum of 90A.

I can just state this in my report and then say that these are the ones that would be used.

Thank you again for all your help

here is some of the info i use for reference, its not super scientific but it usually gets things rolling:

TPR - synthetic rubber, as YO mentioned there are literally tons of compounds some using more ‘filler’ making the rubber cheaper, but also less sticky and usually when there is a lot of filler it doesn’t wear as well. you can get this rubber super hard as well as really soft.

Latex rubber - mostly natural rubber with little to no fillers, is heavier than a synthetic blend, but great flexibility and great traction

every athletic company has their own ‘performance rubber compound’, you can probably go to their websites and read a blurb about that makes theirs special.

I wouldn’t get too hung up on the specific type of material. There are tons of best practices. Likely your innovation is not going to come from the rubber.

Thank you for all your help guys

Really helped and all sorted now.