Hello all. I’ve noticed that this sub forum is fairly heavy on the Footwear side of things and was wondering if there are baggage / carry designers here. To get the ball rolling I make gear for hunters, soldiers and people that head into hard to get places. All of our stuff is either made locally by home sewers or at a factory in California. I would be interested if anyone else here is doing small scale production locally and how you juggle production and R&D so they work together. Also, this would be a good chance to post what people are making so we can help each other. Especially if your like me and don’t have other designers around them.

Here’s a breakdown of an old pack i was working on that didn’t quite make the cut because a better design came along. The front stretch panel was hard to keep from blowing out with the mesh we had at the time. Looks like this had mid production notes drawn in on top as well. 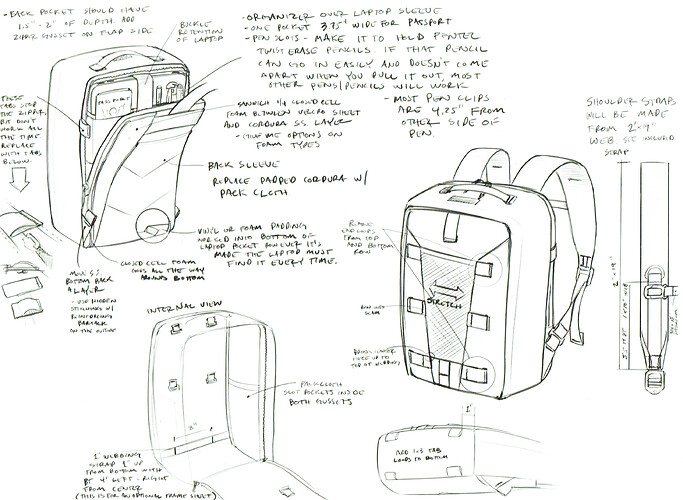 Anyone else out there making cool stuff to carry your other stuff? What software is everyone using for patterning or are you still rolling with Manilla paper and french curves? Even better, who’s using 3d software to skin a shape and make patterns from that?
_yo December 4, 2019, 11:12pm #2

Nice, Yeti. My friend Michael Harris is doing some lower volume stuff. He posts in here a bit. I’ll sen this to him. This is his site: https://www.graymanstudio.com

Man, 3k views and no one is making carry goods? Here’s some larger roll top bags. The one on the left had a gusseted stuff pocket that seemed to deep and restricted up top to be useful. I tried finding a solution to a tension-able method of laterally closing that top pocket but couldn’t find a way of doing it cleanly without buckles attached offset of the center gusset. The right one is still pretty feasible with a couple of external pocket options, the lower four webbing points being attachment spots for a pocket. Both of these bags are missing some seams to make them work correctly. These both ended up passed up for a different layout because of sew time and construction methods. Anyone else have bag projects that either missed the mark on the initial sketches or the features didn’t work out as hoped? 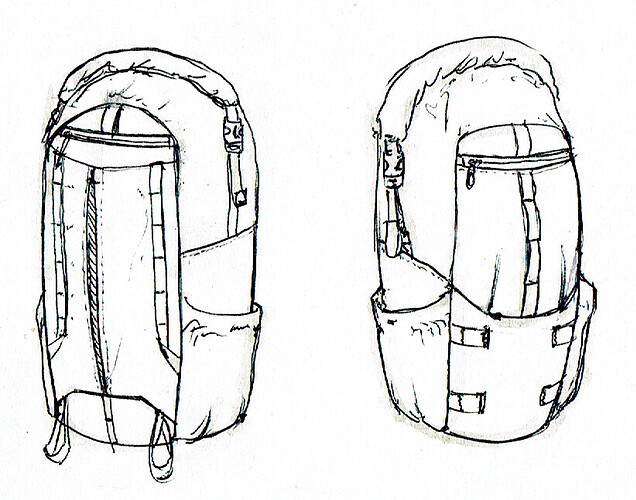 Hey there, long time soft goods designer here. I actually haven’t done too many backpacks, mostly rolling luggage and totes. There’s definitely an art to making sure that what you design can be made efficiently in the factory. It’s useful to have direct contact with whoever will be manufacturing it so that you can get feedback like “if you move this line here instead of there, you’ll be able to save a lot of time in production and have a cheaper product” or just to let you know ahead of time where some things you draw just aren’t feasible as-is. It’s better that you find out early so that you can re-design with intent instead of just seeing how the factory resolves it which WILL just be whatever is easiest / cheapest for them to make.
Welcome to the softgoods world!
I’d love to see a website or pics of anything you’ve designed that’s made it to full samples, is on the market, etc…

Hi Yeti, Skinny has some good advice. My two cents would be:

Thanks for all the feedback guys, glad to see some traction on this. We are just now getting into big factory production within the last couple years and have found some of those points boogie brought up to be very apparent. For the most part, our materials list is pretty set as we make packs for Hunters and Soldiers so there are some requirements on the components. I have been able to do a few urban bags with more interesting materials in the last few months that are going through production right now. The sketch of those two bags are a couple that got round file’d so I have the ability to show them. For the most part, after I do a few sketches and hit autocad, it’s mostly computer from there and the sketching is done with physical prototypes. I will agree with you Skinny that communication is very important, especially when the factory isn’t close by. For the most part, I try to send finished samples to the factory with a tech package and patterns to speed up the sampling process. We have a lifetime warranty on our gear so I am kinda picky on knowing how it’s made and where the weak points are. You can check out my stuff at www.kifaru.net. I will try and post up some process stuff once some of these projects get finished up. I will try and do a bag all the way through to show you guys the small scale weird way my company has to do stuff.

Skinny- I know I’ve made some stuff that experienced sample makers would laugh at, being in contact with that team always cuts out some chaos. Some teams are better than others at keeping that conversation going both ways as well. By the time I send a product to the factory I’ve made probably 8-10 protos so that gets some of the crazy ideas out of the way. We are real big on testing our stuff before pushing it through as our customers are going into some pretty gnarly places. How has the rolling luggage process gone for you? We haven’t been able to do that because of specialty machine restrictions but a gear hauling heavy duty luggage roller has been on the books for a while now. That seems like a product that I would have to approach from a sketch heavy tech package as it would be easier for the factory to figure this one out.

Jboogie - Did you skin your foam concepts with tape to get to the patterns? I haven’t messed around with paper or foam mock ups too much before for softgoods. I know a lot of guys use this method including the Evergoods team and Boreas (unfortunate what happened with them, they made cool stuff) as well. Did it get you on target quicker than just messing with patterns? Always looking to add to the tool quiver so I’ve been curious about this for a while. Seems like a low tech way of going the flat pattern 3d route.

Again, thanks for your feed back guys! I was wondering if anyone was gonna jump in after the 4000 mark!