I have a component I am duplicating in various materials (plaster now, and later concrete), and my 1 peice silicon mold is tearing at the corners when I remove the cast. Actually its not a huge disaster because the mold stills works more or less ok, but I want to do it properly.Other than making a 2-peice mold (I don’t want a join line), what is the best thing to change? Wall thickness of the mold? Or a softer or harder type of silicon? Something else? I’m also interested in figuring out if a small change to the positive form could prevent the tearing… a bigger bevel or chamfer on the edges for example. 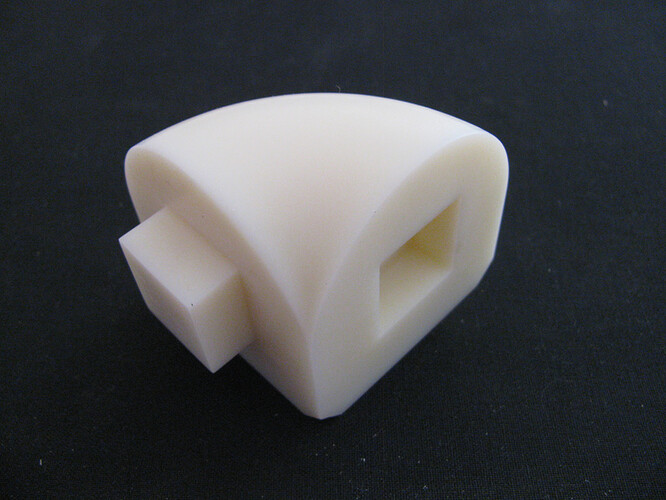 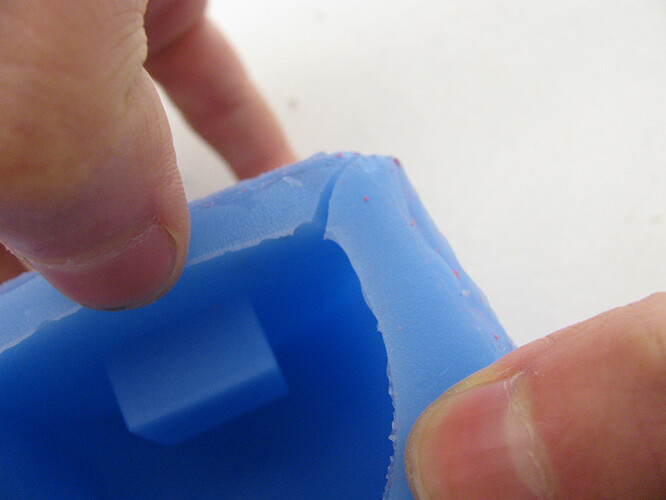 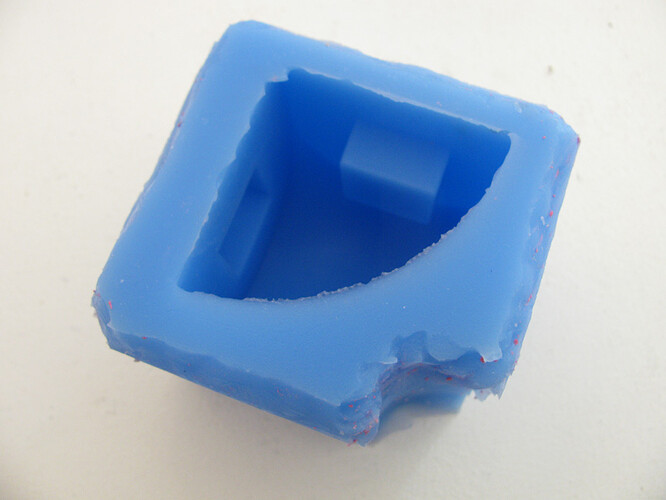 A radius on any/all of the square edges would help, but only minimally. As you know, it is the undercut causes the fatigue crack when you release from the mold. A softer silicone could also help but you may get a lot of deformation becasue the softer stuff can’t hold a form.

Why can’t you do a 2-piece with the parting line along one of the flat-face’s edges? You can always trim any flashing and still maintain the crisp form without any join line.

but I want to do it properly.

Make the mold walls thicker. That is the easiest thing to try first. It’s hard to judge from your photo but it looks like the wall thickness is only around 8-10mm now. RTV is cheap, compared to the labor cost of making the mold.

Alternatively, you might try embedding some nylon mesh (literally panty-hose material) in the mold to reinforce it at the corners.

Id have to agree that your walls are looking thin for trying to pull something with that amount of undercut. try beefing the walls up.

If you remake the Mold I would also suggest making it a two part tool. Or if you don’t want flash on those surfaces make your undercuts a separate piece that can slide out independently. I did this for several “rubber” parts when I was working at a prototype shop. Works beautifully and reduces the stress on the mold so you can typically get 10-15 more pulls from it.

thanks for the tips everyone … guess I’m make 2 part mold then… also the mesh idea is pretty cool. … cheers

“Flask” is an old foundry term for a box that holds the mold material (in metal casting is was the box that held the sand in place around the pattern while it was being rammed).

You might be able to use a thinner mold-wall thickness if it is supported by the flask/box. The thinner wall would come off of the cast part easier.

Are you having any problems with the cast part sticking to the RTV mold? A little “release agent” for the first two or three parts will help seal the surface of the mold and make later parts come out easier.