This is a beacon that would integrate to the Black Diamond Avalung breathing apparatus. 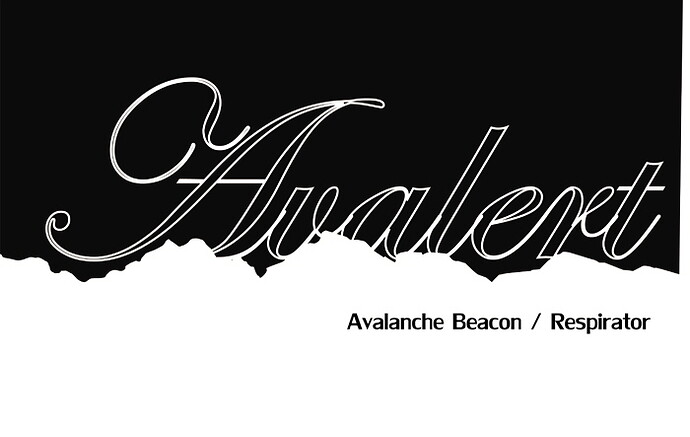 Please let me know what you think of it.

My main issue is with the fact that the beacon/breather is worn on the outside of your jacket. All avalanche trancievers/recievers should be worn on the inside, preferably against you inner layer of clothing. This is because of the massive force an avalanche can inflicts on your body, and quite easily ripping anything thats buckled around your shoulder straight off. An avalanche beacon isnt doing much good if its laying 10m away from were your buried. An other reason is that some of the newer trancievers now also registrate heartbeat and movement, and automaticly prioritizes which victim should be searched for first. This also means the tranciever must be placed on the inside of your clothing.

I think this makes it hard to combine the two products as you have done, breather and beacon, as the breather must be easily available as the avalanche hits, and the beacon (tranciever) should be protected and close to your body.

nice project overview, but why is it so pointy? I feel if I fell on it it would stab be in the ribs. Did you look at how it would be used in receiving mode when you are looking for your buddy it doesn’t look that simple to use.

I must agree with the other comments. I have eaten shit several times with something as small as a phone in my pocket and it has left me hurting/bruised. I would strongly avoid sharp corners and large protrusions. Also, how is it activated? are there buttons? How would you use it while still wearing gloves? I hate having to remove my glove to change songs on my mp3 player (I rocked a tape deck till 2 years ago because i could push the large buttons with a glove).

Thank You all for the feedback thus far.

I think I will add a page that brakes down the function of the unit.

An other reason is that some of the newer trancievers now also registrate heartbeat and movement, and automaticly prioritizes which victim should be searched for first.

I did not know that. This would register movement, although as it is, it is only briefly mentioned.

if you can…I dont know where your based…but you should get up to the mountain and spend some time with a guide/avi control who use this kit day in day out. Understand how they use them to get some greater insight.

Use it myself. A bit more technical than the old trancievers, but very intuitive and effective search mode.

Thanks everybody, I have added one new page, and might add another tomorrow.