Hi everyone. I’m producing a stretch-fabric chair for my furniture design class, and was hoping for some advice on how to attach the fabric to the metal frame easily and inexpensively. I’m going to be building a mockup with a PVC frame, unsure of the fabric at the moment.

Thanks for any help, it’d be greatly appreciated. 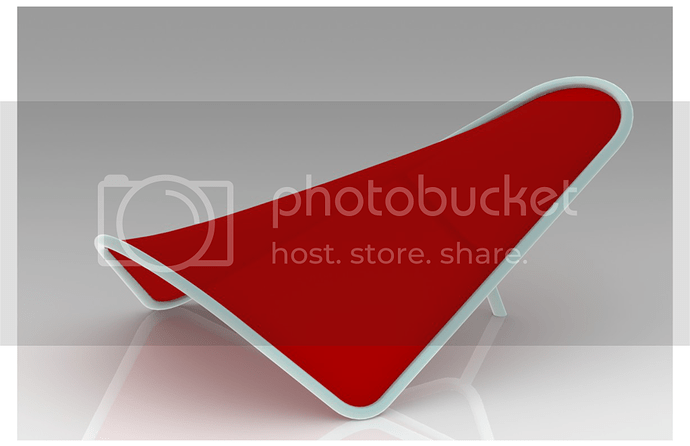 First, I feel like I should repeat something my furniture prof told me, “Choose the fasteners first, then design”.

I think the bigger question here is how are you going to make the frame? If you can use multiple bent pieces then you could create a loop in the edge of the material that you could slide the pieces through as you assemble the frame. That won’t be easy.

If you use snap buttons you could wrap the cloth around the frame and snap it to itself.

If you put cord into the hem of the cloth you could snap round plastic clamps over the frame. Think PVC with a slot running lengthwise.

If you had a “track” in the frame piece you could also put a cord in the hem and slide it into the track. Check Youtube for “How it’s made Pop-up tent trailers” to get an idea.

I feel like your design, while attractive, is not terribly good for production. Too many young designers don’t think about these things. This should be something that is always in your mind during the design phase. It will save you a lot of trouble. Frankly, there’s a reason that other chairs aren’t made that way.

I feel like your design, while attractive, is not terribly good for production. Too many young designers don’t think about these things. This should be something that is always in your mind during the design phase. It will save you a lot of trouble. Frankly, there’s a reason that other chairs aren’t made that way.

PVC might not behave the way you want especially when you run it through a table saw to create the slot. When you twist it, that slot won’t stay open. Maybe you build the PVC frame, then attach the fabric with snaps or screws. Maybe there’s a section of tube you could use to trap the fabric, too. Think of a pipe with a C-shaped cover trapping the fabric.

“Choose fasteners first, then design” is a pretty good mantra.

Thanks for the help everyone.

I’m only producing a mockup (don’t have the money to do a working version), so I think I’m going to use the snap idea. It will take some experimentation, though. In the future I’ll also be sure to think about designing for production more.

Good luck trying to bend PVC to the configuration you show… lots to learn besides fasteners.

I’m trying to understand the concept. Are you counting on the fabric conforming to the body? It doesn’t look too inviting to sit in… on.

Rather than mocking up 1:1, I’d suggest a 1/4 scale (or smaller) model to work out your concept. The fabric could be glued on with cyanoacrylate glue (instant glue) at this stage.

Something else to think about.

Without some form of “stretchers” to resist forces, when the load is applied to the seating area, the two ends are going to try and come together, while at the same time, the two “front” legs will try to spread apart. 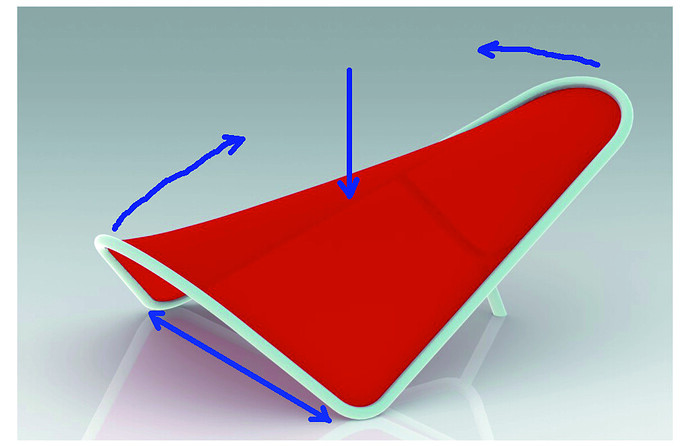 Attachment methods in tensioned fabric structures, especially furniture, is subject of many patents.

Tensioned fabric structures requires the study of catenary curves. Tensioned fabric does not usually take on the expected form as represented here in a CAD lofted surface.

Two easy methods to prototype your design include:

Tensioned fabric does not usually take on the expected form as represented here in a CAD lofted surface.

Ahh yes, the impossible lofted surface. “But I can draw it in SolidWorks!”

Well, I made some small hand models to confirm that the shape will at least roughly come close to the SolidWorks model.

If I did not have to turn in a computer rendering, I would not have done the fabric surface in SW; I understand that it’s pretty uselesss and doesn’t conform at all to reality.

Nice to get the crits and help regarding it’s viability as furniture.

I’ve never done furniture before so this and the comments here have certainly been a good learning experience, thank you. LMO; that bending could be used for springiness if the metal was strong enough not to warp inwards. But yes that might be an issue.

We’re not ganging up InvertedVantage … honest. Just a constructive critique of what we see. If you decide to stick with “design” you’ll go through a bazillion of these in your career.

I think you can get a really good feel for how your design is going to work, and any changes you need to make, by using a simple coat hanger as you modeling material. For “fabric” use a woven model aircraft heat-shrink covering like Coverite. It is adhesive backed, so it will stick to your frame, and it is hear shrinkable.

It’s alright, critiques help a design and the designer.

I was going to do a half size mockup out of PVC, and heat-gun some PVC tubing to create the bends in the top by running them through a jig. I was going to attach the tubes together by using an inner tube that has roughly the same outer diameter as the outer tube, and sticking it into both tubes to glue them together.

I came up with an idea on how to get the covering on and still keep it looking like the model; I would create a slot in all the tubing, and sewing a loop in the fabric, loop it around the smaller tube and insert that into the larger one. Since no one is sitting on it, it wouldn’t have to bear much stress.

I made a different model using monokote, but I felt that the way that shrinks onto an object is different than fabric might be.

I made a different model using monokote, but I felt that the way that shrinks onto an object is different than fabric might be.

Exactly. That’s why I suggested Coverite … it’s actually a woven material, as opposed to a linear material like Monocote. If you place it on the “bias” (with the fabric aligned at a 45° angle it will conform to damned near any compound surface. It’s also somewhat lighter than Monokote, doesn’t take as much heat to shrink it, and won’t stress the frame as much.