I’ve been checking this site out for a while and really like all the news and posts, this is my first work, looking forward to your replies…

Basically the idea was coming up with a new concept with different features and styles, the car comes in 2 colors, a dark grey and off-white color. The intention was for it to look like a sport car yet something fierce and big/strong at the same time.

Below is the process from start to end, selecting different parts of each, hope you enjoy…

I really like the top front and back views. For some reason the side view is REALLY not working for me. I think the proportion of the body to the window could be better. I feel like the body is too tall.

thanks for the reply and thoughts, much appreciated

I personally liked the side more then the front and back though, haha

I think whats not working with the profile of the car is that the line of the hood descends as it moves back creating a sort of pinch point where the windshield starts. This creates a sort of visual tension, and kills some of the sportiness of the design.
As targerine pointed out, the body seems a little too tall over the front wheel well.

I hope you don’t mind but I did a quick photoshop to show you what the difference might be with a more sloped front end and shorter body over the wheel well. I realize this may not be the look you were going for, but I just thought it maybe helpful in describing my point. 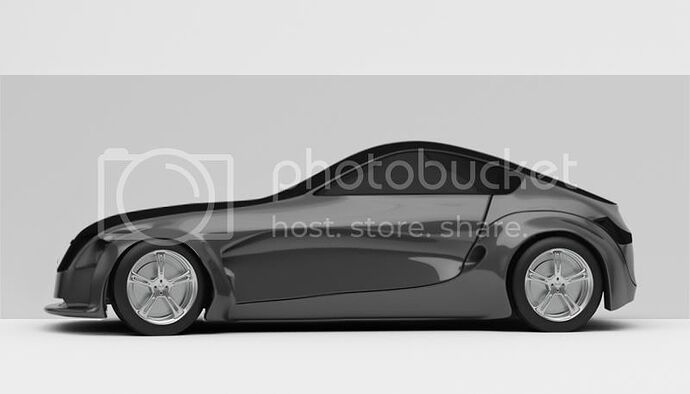 You can also see how similar sports cars with similar long front end propotions treat the hood’s profile. Below are images of the SLS and the Z (which has a very similar cabin shape to your design)

Also, did you do the CAD modeling as well as the design.

thanks for the reply,

that’s great observation, and i do agree with you… although with the new edit made on the side view, im not sure, as far as look i felt the original concept was bolder and tougher, just my subjective thought on it… I think 1 thing that could be done is maybe the level of the curve in the front could be less, or somehow seem more natural…

as for the cad modeling, do you mean the final renderings?

if so, the drawings on paper and idea of the car was done by my friend John Baltazar, and the modeling and rendering by me, things that where used for modeling where 3D Max and rendered with Vray 1.5 sp4