As seen on another forum

I think my favourite is this one

This is quite cool too:

I sure as hell am not sorry. Nobody needs to apologise for me you pathetic bunch of losers. For those of you in the rest of the World… the clowns writing those letters are the MINORITY. America has spoken. BUSH for 4 more years. Deal with it.

Why not try an electoral-weighted cartogram from the NYTimes 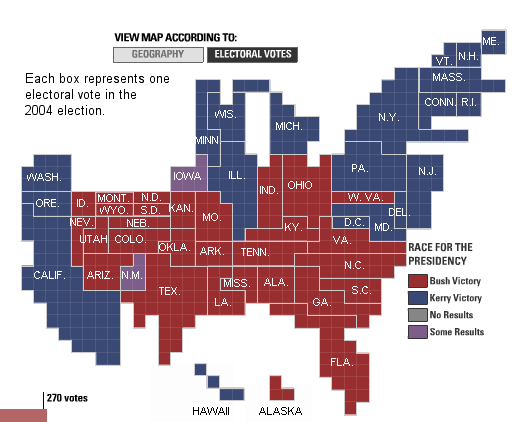 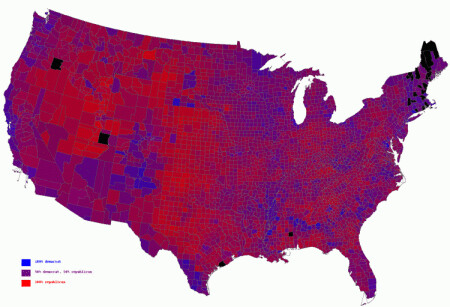 Is this how a designer represents the facts on a site where people are visually sophisticated? Shame on you.

I sure as hell am not sorry. Nobody needs to apologise for me you pathetic bunch of losers. For those of you in the rest of the World… the clowns writing those letters are the MINORITY. America has spoken. BUSH for 4 more years. Deal with it.

a silly and arrogant American.You will have a lesson soon

what will that lesson be? Are you going to walk around with a sign chanting or maybe burn another flag?

two loosers from opposite sides puffing out there virtual chests…oooooooooooo

I saw http://www.core77.com/corehome/imsorry.jpg and wondered if you can buy real postcards like this one. does ne1 know? thanks!

Your username violates the third commandment as God’s name is taken in vain by us when we use it without due consideration and reverence. - “Thou shalt not take the name of the Lord thy God in vain: for the Lord will not hold him guiltless that taketh His name in vain”

If you believe in the same God that President Bush claims is his Father and guiding Voice, then you should at least treat it reverantly and not in this flippant manner. The difficulty is: in which God does the American President believe – a God which condones “bearing false witness” (e.g. Iraq has WMD’s) and making exception to “thou shalt not kill” (e.g. casually dropping 500lb bombs), or the self-serving god of greed and deception? The sixth Commandment prohibits the barbarous and inhuman sin of murder, which is the firstborn of the Devil, who was “a murderer from the beginning” (John 8:44). By permitting prisoners to be sexually tortured and murdered during interrogations, America as a nation has shown itself to be a Christian nation in claim only and not in deed. “Whoso sheddeth man’s blood, by man shall his blood be shed” (Gen. 9:6). How many dead innocent women and children have died in Iraq? How can we really know? America refuses to account for their murder. Would Jesus have waited 12 years to hold Saddam Hussein accountable for his atrocities? Would Jesus have dropped bombs among the crowds knowing both innocent and guilty would perish? Or would He have taken God’s path by placing Himself at greater risk and confronting only those who have shed blood to protect the innocent and obey the Lord’s commandment; by placing His safety in God’s hands instead of relying on weapons which kill indiscriminantly but make the “job” easier?

America attacked Iraq not in defense, for in truth, America was not attacked by them. America attacked Iraq not to bring aid to the suffereing, for in truth, the world is full of suffering and America does little to remedy it. America and President Bush invaded Iraq on claims of preempting an attack. This is the stated reason initially given for these actions. When the reasons held no merit, America changed the reason to cloak itself in excuse for Godless and devious actions. The reason became to save the Iraqi’s from Saddam, but now that Saddam is gone, America continues its fight against the Iraqi’s who wish them to leave. America not claims to be saving Iraqi’s from Iraqi’s! By doing these things supposedly in the name of freedom but from other testimony in the actual name and service of wealth and riches, America proves to the world it is not a God-fearing nation, for as the Lord our God has commanded: “Thou shalt have no other gods before Me”. America’s god is money. America’s might is the gun and not the word of God, America’s glory is hollow and fleeting and not for the glory of our Lord.

In respect to all the true believers, please do not diminish and insult our beliefs with your thoughtless words.

I would have used an “!” if I were taking it in vain or possibly ALL CAPS. As for the rest of your sermon there is some validity but save it for the congregation my friend we’re still not sorry.

WereNotSorry.com is for sale | HugeDomains

Find your domain name at HugeDomains. Start using this domain right away.