Art - Whats on your walls?

So we have been in the new house now for about 6 months. I want to start filling the walls with some great art. As most of us here would contest I don’t want to go to Homegoods, Target, or any other box store and buy some mass produced prints. I wanted to see if any of you have some suggested artists or sites to check out. We have pretty eclectic taste so the more the merrier.

When I was young my parents collected movie title cards (basically small movie posters). In my bathroom There are a few classics like Empire Strikes Back, Tim Burton’s Batman and Raiders of the Lost Ark. I used to have Psycho next to the shower and The Shining showing the ax wielding scene next to the door, but they are put away now. You can be creative with it and have some fun.

We re about to move into another place, but this is what one of the walls looked like in our Boston Apartment, the last time we were truly settled in. Some of the pieces are my wife’s, there is a sketch I did, a lot of random artists work we collect, some work by friends, one piece by Joseph Albers that is the prize piece, a sketch by a local architect.

My advice, don’t buy things just to buy things, let it be an adventure as a couple. Go to some local art gallery openings. Small ones. Go to a local art school and visit some studios and buy stuff right from students. Let each piece have a story. We have been collecting from some artists for 6 or 7 years, it is fun to have that relationship. The first thing we did when we moved to SoCal was go to an art opening and buy a few pieces. 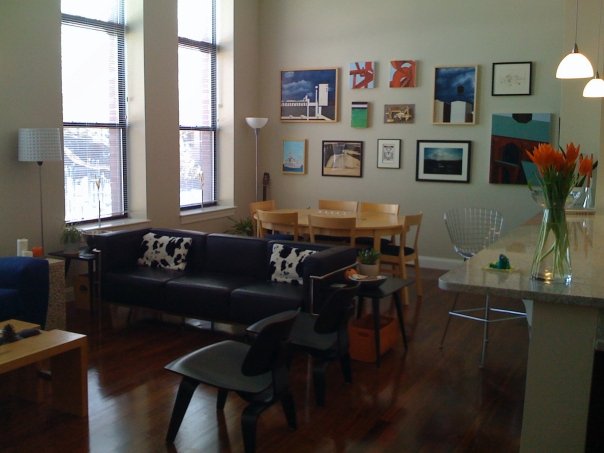 My advice, don’t buy things just to buy things, let it be an adventure as a couple. Go to some local art gallery openings. Small ones. Go to a local art school and visit some studios and buy stuff right from students. Let each piece have a story. We have been collecting from some artists for 6 or 7 years, it is fun to have that relationship. The first thing we did when we moved to SoCal was go to an art opening and buy a few pieces.

I totally agree. We have a few crap pieces that are just place holders at the moment. Our town is one that really puts a lot of enfaces on local business and has local art and craft fairs in the summer. We plan to hit those up next year. I have a few old photos and art from family that I plan to put up. We also live close to Joe Kubert comic book school. I was thinking it would be cool to get some of that art in the house.

Yo you are lucky that your wife is an artist. Mine is an HR manager. She gets a bit impatient when it comes to this stuff, but gets very excited when she sees it come together. I guess I just have to hold her off for a while.

I’ve dreamed about getting this pencil wall and arrange it as a long gradient strip along a long white wall I have. But it’s so complicated to get your hands on the whole thing - buy from japan only a few pencils each month… so I thought I just make my own, but haven’t found where one can purchase a 500-pencil set. So to answer you question - I still have nothing on my walls 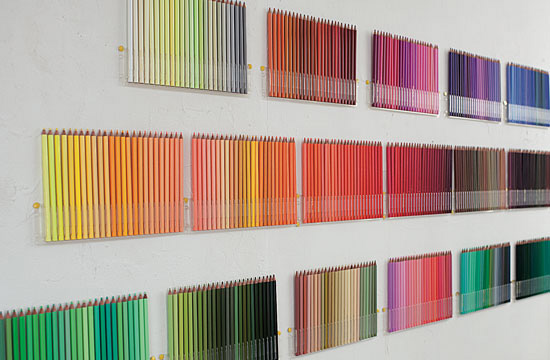 this complete set of 500 colored pencils consists of 20 units, each pencil telling its own story with a unique name. Thought recently I’ve purchase some LinePosters (LinePosters - Etsy ) and a bunch of old maps that I might put up.

It is the same old “what yo said”, again.
Currently we live on the first floor of a town house which is owned by an elderly couple of local artists. The whole place is flooded with sculptures and paintings , so the walls in our place stayed mostly bleak, only one painting of my wife and one figurative scetch that I did years ago. With all the stuff of the kids I got enough color around me. When we move to our own gig we’ll put some things up again, which are on the attic right now. Like a set of hand made french menu cards that my wife braught from working there.

In general I do believe in less is more, especially when it comes to home decoration, which is hard to follow for the girls.

P.S I used to assort my CDs according to the colors on the back, but my wife hated not to find anything within this very logical scheme…,

I made something similar to this for my friends wall out of paint swatches from home depot (I trimmed them into squares). If you’re into old games you could do the same thing with something you liked when you were younger.

That colored pencil thing is pretty sweet too.

This website is for sale! corporatepig.com is your first and best source for all of the information you’re looking for. From general topics to more of what you would expect to find here, corporatepig.com has it all. We hope you find what you are...

A lot of cities and towns have art walks and open studio days, always good to explore on those…