Are all TV Remote Controls bad?

I went to a WIDD function called “Show and Tell me Design”, where people nominated examples of good and bad design.

The unanimous winner of the ‘bad’ design was the TV remote control- everyone attending agreed they are complicated, difficult to use, overloaded with features and just generally poor. Even the Apple TV remote which is meant to be quite simple (I’ve never seen one) was said to have a difficult interface (my experience of writing out instructions on how to use the TV, DVD, PVR etc. for my Mum when she visits, bears this out- an A3 page full of dot points and drawings and arrows- bonkers).

One of the panel at the WIDD function has experience working for a high end audio equipment manufacturer, and told a story of when it came to woking on the remote, the factory in China said “Lets go to X factory, they make all the remotes for famous company A and famous company B”. The remote was an afterthought, it is bought off the shelf, and is programmed accordingly, with the end-company logo slapped on at the end.

Why is the user experience for TVs and other AV equipment so bad? Are there any good remote controls out there? 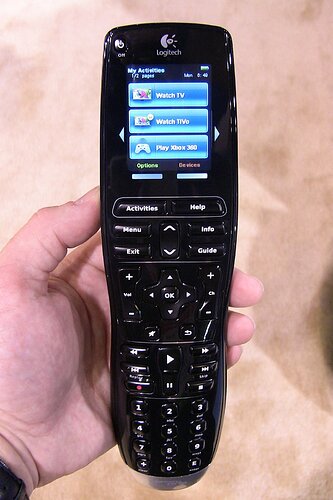 Anyone use the Harmony remotes. I have one and really like it. For me, the biggest problem with a remote is the inter-operability with other electronics. At my house, I have a stereo, TV, DVD player and cable box that I have to control. Some of the controls let me use 2-3 of the devices, but never all of them. Also, the controls do not have all of the controls I need. At least, the Harmony controls everything. My only complaint in my system is that the sound control is very coarse. I often use my stereo remote to control the sound.

The big breakthrough with the Harmony is that you can combine functions in the LCD menu. Therefore, I can set up “watch TV” to power on my TV, stereo and cable box and then switch the inputs to that function. It reduces the job of 2-3 remotes and 8 button pushes into one. Pretty powerful.

Interestingly, from the wikipedia:

The Harmony remote control was originally created in 2001 by Easy Zapper, a Canadian company, and first sold in November 2001.[3] The company later changed its name to Intrigue Technologies and was located in Mississauga, Ontario, Canada. Computer peripheral manufacturer Logitech acquired it in May 2004 for US$29 million.

Yet another Canadian innovation that the Canadians were not brave enough to exploit.

Also, I like Bang and Olufsen remotes. They just love tossing buttons at problems. Wow. No idea how easy it is use though:/

The Harmony is good, but it’s an aftermarket problem to a solution that shouldn’t exist in the first place.

The B&O one looks OK, but if I gave it to someone unfamilar with it, who could work out what the yellow, green, red and blue buttons mean?

I’m surprised HUD’s arent used more- all the TV brightness/ sharpness/ hue are, but not switch to DVD etc. I like the idea of a programmable touch screen on a remote, but if you are looking at one screen, why do you need to look down at another?

I had no idea about the remote control OEM market. It is kind of sad, outsourcing such a big part of your user experience to an off the shelf product:

Problems will be solved in 2-5-8 years with touchscreen remote controls.

Sanjy: It would be interesting to see a company sell their TV based on the remote. I think that is the core of the problem. Look at an electronics store, it is often difficult to find the remote for the TV you are looking to buy. Therefore, the manufacturers just toss something in the box with no regards for the design & use.

The buttons are small and hard to see and you have to look at it (I mean like study them) to navigate it. There are a number of nice touch screen remotes on the higher end market, but what would make a larger impact would be something more like a wii mote. Using a point and click interface and maybe very basic movement gestures to control some other minor functions. I’m seeing something like the ps3 home screen and the wii navigation ability in the future.

I know I’m cheating here, but 95% of everything I watch now goes through this guy. It’s funny but I don;t have time to channel surf anymore. It’s “set a recording for something that I know will be on later” or “watch it now, on demand type stuff” 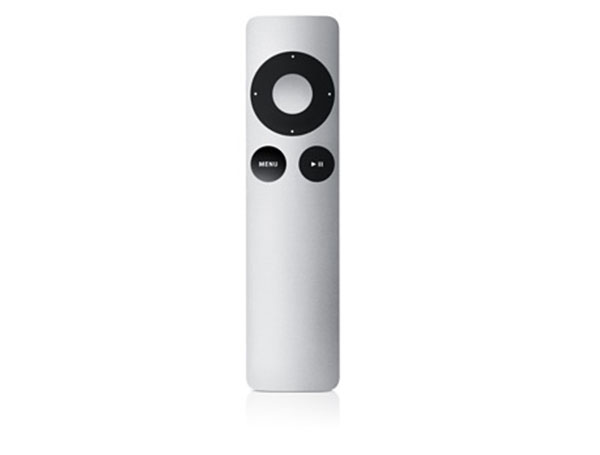 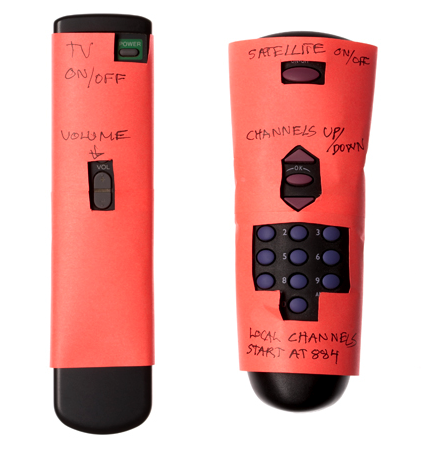 S.V. is that your remote set? Pretty hilarious.

Reminds me of this awesome write-up by Jakob Nielsen:

He compares the Tivo remote (another very good remote design, without a touchscreen) with a standard remote.

As for touchscreens, I think we are jumping to them too quickly. Look at what happened to Ford in J.D. Power’s survey of quality. Huge drop because of a crappy user interface on the computer. Let’s work to get really great button interfaces and save the touch screens only for when absolutely necessary.

BTW, if you don’t subscribe to the useit blog, you should. Maybe 3/4 of the stuff is talking about web sites and programs, but the other 1/4 of the really relevant design stuff is gold.

The unanimous winner of the ‘bad’ design was the TV remote control- everyone attending agreed they are complicated, difficult to use, overloaded with features and just generally poor.

Sure, remote controls indeed appear to be an afterthought in terms of their design and usability. However, I think the remote control itself is partly to blame. The real problem I feel is the lack of a clear link for the user between the product and its remote control. Anyone who has ever tried changing settings in a TV or DVD menu probably knows what I mean. TV’s user interfaces are horrible and have no apparent relation with the buttons (and their labels) on your remote. It reminds me of the remote controls in the 90s which had this separate lid to cover certain buttons which you only had to use every now and then. It makes the remote LOOK easier to use due to less visual clutter. Great solution I think, what ever happened to that?

This picture shows that in a DIY way! I’ve seen that pic in one of Donald Norman’s books.

The buttons are small and hard to see and you have to look at it (I mean like study them) to navigate it. There are a number of nice touch screen remotes on the higher end market, but what would make a larger impact would be something more like a wii mote. Using a point and click interface and maybe very basic movement gestures to control some other minor functions. I’m seeing something like the ps3 home screen and the wii navigation ability in the future.

Agreed. We all know how difficult it is to operate them in the dark although one of my remotes has glow in the dark buttons, which helps but is not sufficient. Also, all buttons on a remote basically have the same shape and topography which makes it even more harder. Why not make their shapes more distinct so you can feel what the button should do? Or perhaps give dedicated areas to common operations (channel, volume, etc.) on the side of the RC? Or using natural gestures like simon_four_fingers suggests.

The reality is that each home is cluttered with perhaps 3-5 remote controls which control one product each. Although I agree that each remote control should be optimized in terms of design and usability to create a coherent UX we cannot expect manufacturers to come with a remote that can control all other products (from other brands) in your home as well. That is why solutions such like the Harmony exists.

Of all the remote controls I’ve ever used I found this to be the best:

Ergonomic in my hand, easy to pick up from a table because of the curved sides, clear dedicated areas for volume and channel right underneath your thumb, and very limited controls.

Cool! Hiding the keys at the back in such a way that you can also hold it easily without accidentally pressing the buttons on the front.

Reminds me of this awesome write-up by Jakob Nielsen:

He compares the Tivo remote (another very good remote design, without a touchscreen) with a standard remote.

That is a great link.

Thinking back to when I’ve bought AV equipment- never has a salesperson even mentioned how to use it, or has even shown the remote, it’s all about features. Then again, I’ve only bought from ‘big box’ retailers or department stores, not specialty shops.

Who even uses TV remotes anyways?? If you have cable you are most likely going to be running it through the PVR remote ya?? Then if you have a stereo you’ll be using the amplifier remote?

I’m already controlling my itunes through my phone, maybe there is a remote control app? Also do you still have to program remotes like you used to? That is such a pain.

Not quite there yet, but you can imagine how well this will work n 5 years: KinEmote Control Windows Media Center, Boxee, XBMC & more Microsoft Kinect - YouTube

I love my Harmony…the design on my older model isn’t great - buttons have horrible tactile differentiation and I’ll often hit the wrong key if I’m trying to blindly do it, but at least it’s back lit. But the fact that it controls my TV, AV Reciver, DVR, PS3, XBox, Wii and Radio (and can even control the blinds and lights if you have the right wiring in the house) is pretty amazing. The touch screen lends itself very nice to context aware controls. I don’t need a full time button for something that might only work on the receiver.