Yeah, well since I’m not a designer (and just someone who’s just interested in becoming one) I’m still looking with a critical eye at different things. One of them I just noticed today: iPhone’s curve.

A.k.a. the one from the 3GS one we are somehow accustomed to lately. 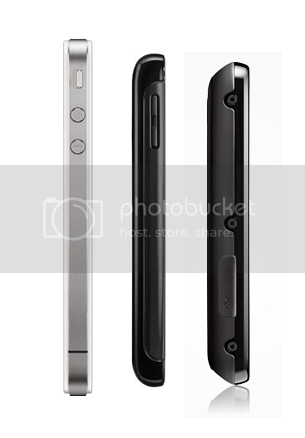 Am I the only one who thinks that it would’ve been better if the iPhone had those curves?..

I must admit I’m not a huge fan of the iPhone 4/4s design. As a technical exercise it is impressive, but a smart phone is in many ways just a huge screen you hold in your hand and ergonomically I think the 3g/3gs feels better in hand. Still, it’s not a heavy thing and it spends most of its time in your pocket… it’s not exactly what I’d call a disaster in ergonomics

That being said, I still think the iPhone has the best looking profile of the three in your example.

The Defy is really quite nice in person, and I hear it is selling well in Europe. Water and debris resistance is a nice feature. It has the same screen size as the iPhone, but it’s height is much shorter. There is much less back painted blank space on the top and bottom of the screen in the front view. To accomplish this though it seems like they had to make the components thicker, so the shorter and thicker profile seems a little chubby in the orthographic side view, but in reality it is pretty nice.

The iPhone 4 is really not about form, it is about materials and proccess. I like that they have changed the profile and back on each generation while keeping the front face detailing realatively similar. That said, I still preffer the iPhone 1 the most. The metal back was awesome (though a nightmare for designing the antennas I’m sure, phones have between 3 and 5 antennas, and metal interferes with their functionality). The shape on the 3G was very nice, but the glossy matterials just didn’t fit for me. I would have loved it if the white 3G was ceramic or something special to the touch.

i dont run a case on my white iphone 4 and after 12 months it looks about 99% as good as it did out of the box. the glass back has resisted wear and tear amazingly.

my iph3gs looked old after 2 months of pocket time.

if you can make a product that gets used 20+ times a day look fresh after 12 months, thats got to be worth something. personally, it’s pretty important to me as well - i like my shit to look nice and box-fresh. but i’d agree, not as comfortable as the iph3.

and i agree with yo, IOS has come a long way, but the iPh1 was a really stunning thing

It has the same screen size as the iPhone, but it’s height is much shorter

Wrong, the Defy has a 3.7 inch screen, whilst the iPhone has 3.5. And I did make the comparison myself with a friend, so…

The fact that the curve gets messy, is not the curve’s issue, but rather the quality of the material, tbh.

A man who cherishes others being wrong about .2" is focussed on the wrong things.

Compared to a 4"+ screen, they are pretty close.

That said, I still preffer the iPhone 1 the most. The metal back was awesome (though a nightmare for designing the antennas I’m sure, phones have between 3 and 5 antennas, and metal interferes with their functionality). The shape on the 3G was very nice, but the glossy matterials just didn’t fit for me. I would have loved it if the white 3G was ceramic or something special to the touch.

I completely agree on the metal back.

Plastic and glass don’t look great all scratched up. Metal on the other hand ages well. I am getting excited about the iphone 5 rumor that it will return to a full metal back. I’d buy one and keep it 5 years, to be honest. And after 5 years, the patina would look better than the pristine new version.

That patina would be sweet if they switched to copper…

I like the 4S best from all points of design, engineering, and use. The glass just feels so solid and the lack of wear as mentioned is incredible. The 3Gs glossy back was by far the worst. The 1st was nice with the Alu rear, but it the pure radii were kind of boring and not as nearly refined as the hard edged 4/4S. Some people say the 4/4S is too hard to hold being so angular, but I don’t really know why you’d be holding it that tight.

I don’t think there is anything I can complain about design or engineering-wise on the latest iPhone. I haven’t felt the others mentioned, but just from the pics alone and when I have felt most other non-iPhones the best I can get from them is that they are either trying too hard or not enough. iPhone is just so pure ID.

PS. The others in the pics do look super fat too.

My issue with the iPhone 4 is when I have dry hands (basically every day in the winter). The metal frame is very slippery and if I don’t hold it tight, it’s bound to fall out of my hand while I’m on the shaky NY subway. That’s why I grip my iPhone very tight, and the edges start digging into my hands. I understand the whole “no case” reasoning, but for me, the iPhone is a much more functional product when I have a bumper on it. The rubber is a great gripping surface and the rounds feel great in my hand without adding much thickness.

One of my friends used to create really elegant designs in the metal backing of iPhones and iPod’s in his free time, such as the american flag waving in the wind or other themes. I wish I could do that with my iPhone4 but don’t want to be the guinea pig to test it’s possibility. Maybe when I need a new one I’ll attempt it on my own.

I like the sleek, futuristic feel of the flat-back of the iPhone4/4s, but never had an older version to compare it to (besides the first gen iPod Touch) in Apple’s line-up. I haven’t liked too much of the curves offered in other phones over the years, but honestly haven’t been looking since the iPhone4’s came out and I got one.

As for the discussion of a case, I would prefer not to use one and let the iPhone4/4s be seen as it was created; but I find a case is more fitting for my hand and my pocket. I barely notice it without a case in my pocket (which I love the idea alone), but this leads to me forgetting it places. I’ve had different types of cases in both materials and cost… carbon fiber, leather, and now probably the cheapest rubber style with a tire tread design you can find ($3). It’s nice being able to put the phone on an incline or on a dash in a car without worrying that it’ll fall off.

There are several reasons for the straight edged shape of version 4:

Note: my measurements are wrong, they don’trepresent the actual products…

Let’s state the obvious, the iPhone 4 is the greatest piece of industrial design in the last 40 years. Like any great design though, it has warts. During lunch someone complained to me about how the glass is shiny, making it always dirty and creating a lot of glare. I hate holding it because of the form. It’s $200 and it always feels like it’s falling out of my hand. I don’t like the physical experience of using it.

As IP mentioned zen, I’ll add my two yen. Zen masters have to maintain a certain behaviours to keep them grounded in reality. Typically, the zen master will be the one who cleans the toilets or some other menial task. They also keep a bad habit, like smoking. It’s not along the theory of not bottling up, but just the acceptance that we are all human with a physical body and natural desires. Instead of attempting to stop these aspects, it embraces them.

I think all Apple products embraced that about Zen. None of them are perfect, that’s why they are great. For example, I can’t think of any physical ID complaints that I have about Blackberrys, but it’s also completely forgettable.

Let’s state the obvious, the iPhone 4 is the greatest piece of industrial design in the last 40 years. .

I think the iphone4’s innovative manufacturing and simplified shape keep it apart from and ahead of the competition. Isn’t it more of a design statement than an ergonomics issue? Not that either is more right in judging a good product. I just think it’s very intentional.

I agree with tbaker- i liked the feel of the iphone3 in my hand more, but there is no question that the iphone4 feels and is more durable. Oh and the fact that everything else technologically about it is far superior.

Don’t forget that the rear case of the iphone 3 was so thin every single one would develop stress fractures around the headset and IO connectors.

I think all Apple products embraced that about Zen. None of them are perfect, that’s why they are great. For example, I can’t think of any physical ID complaints that I have about Blackberrys, but it’s also completely forgettable.

Interesting thought. I recently got the iPhone 4s and I think this, combined with the materials and very solid build quality make it feel very real (for lack of a better word), which is very refreshing and a really nice experience. I feel like I should get a bumper or case for it, but part of me doesn’t want to, partially for this reason.

I’m not sure I’d be so thrilled if I had try to use it on the subway often, though (it is a bit slippery).

seurban: try the bumper. It’s only $30 and looks/feels great. I have the white bumper on the white iPhone and it looks fantastic. Grey rubber tends to get dirty, but nothing that won’t clean itself after a day in my jeans.

I think the thinking behind the design of the iPhone is more complex than manufacturing expediency. Manufacturing experts wondered why Apple would have such a design that is so expensive (20+ screws), laser design, etc. What they failed to understand was the feeling people have when they hold the device. Apple would love to have a phone that was all aluminium like their computers and iPads. Owning these devices, they feel more solid than any other computer I have ever owned. This feel is a very important thing. But to make an iPhone all out of aluminium is hard and maybe impossible. They have gone for all glass instead. The 4s I own feels better than the iPhone 3G I had and will probably last longer as well.

My bet is they will go with an all metal or curved glass design for the iPhone 5. They learned something about antenna design and using multiple antennas to pick the best signal.