Apple sued Samsung Electronics, claiming that Samsung's Galaxy line of mobile phones and tablet "slavishly" copied Apple's iPhone and iPad, in another sign of the escalating intellectual-property tensions in the fast-growing mobile-device market.

It makes me wonder what took them so long.

Reminds me of the Hudsucker Proxy,

For instance, take a look at this sweet baby. I developed it myself. Yessirie, this is my big ticket upstairs. You know, for kids.

How does one obtain and litigate the IP of nothing? I don’t know but I’m sure the lawyers will love this pissing match. Maybe Jerry Seinfeld will get involved.

Maybe it is all marketing related. Every hero needs an enemy.

That’s what I find interesting. But you can’t really dispute that phone they cited…

That’s what I find interesting. But you can’t really dispute that phone they cited…

But you can. First of all, it’s selecting a specific screen off an Android handset. One without widgets, one full of apps. It seems silly. Sure they are both rounded rectangles with some buttons on it. The page is a grid of icons. If the picture sited was the only way to make your screen look (like on iOS) than you may have something. Take off some of those icons and through a big clock widget, a weather widget, etc. they won’t look nearly as similar.

Sorry, I was refering to the hardware of the phone. I haven’t really gone in-depth as to their patent claims, but the bezel, radii, etc, seem pretty much the same, but fitted to a slightly different electronics footprint. I don’t envy the designer who got that boring brief.

Plenty of hardware differences. The Samsung looks like the lower screen radii are larger than the top, plus a sculpted back. Having designed a few smart phones, it is challenging to break the mold in a way that does not feel forced, adds superfluous detail, weight, cost, and thickness, or just waters the design down. The challenge is to break the overall architecture with a new form factor, which is a very difficult challenge. This would break down the icon of the monolith that Apple dominates. Not impossible by any means, and in the world of android it would provide some much needed differentiation. An ODM that invested in this level of R&D would be well placed to be a leader if they could pull of that level of investment in the entire ecosystem (hardware, software, content, brand, design and carrier relationships). Right now Apple pushes on all of those fronts, while most other players need an intricate system of partnerships, each with their own needs.

yo: but they still copied the details that everyone notices: the silver bezel, the bar-like speaker hole, and the rounded-square home-button. You don’t need to change the whole architecture of the phone to make it not look like an iPhone…

I think HTC has got some good design going on and could be that Android-player you describe. The HTC Legend is probably the best looking phone Ive seen apart from the iphones. The latest Desire S model is really nice too when you hold it in your hands, you see details and build quality that dont come through in photos. Even surface development you wouldn’t think would be there - it becomes quite obvious that HTC (One&Co) designers do still have their workshop

Too bad HTC don’t seem to be consistent in their details, and every new phone could be a new brand.

Sorry, but…what a bunch of BS.

The Samsung products listed by Apple seem to actually have improved ID in their form factor, as opposed to the claims of ‘generic copy’. Ever had an iPhone or an iPad slide out of your grasp because of their simplistic convex rear shell shapes? The Samsung products seem to improve on that problem.

As for the OS, I agree with some of the posts - because you can tailor your Android screens to your liking, there’s little comparison to be made, much less any argument of ‘generic copy’ for the GUI.

That lawsuit’s a FAIL.

I thought, this thread was missing this:

I’d love to see this one explode into Samsungs face. They might have done their due dilligence on the I-phone IP, but the
result is a crystal clear copy, if not seen through the gauged eyes of the designer.

From a meter distance it is an I-phone, which is not an I-phone.

But, from a business perspective: What sense was in that developement. Who’d buy it?

mo-i: I have to defend Samsung a little. Here in NA, people don’t buy their phones. They get them included with a contract for phone service. Therefore, it is the phone companies that drive the phone design, not the clients. Seeing as the iPhone has only been available with AT&T and now Verizon (am I wrong here guys in the US?), probably the other companies came to Samsung and said, “make us something that looks like an iPhone…QUICK!”.

As Marx would say, “the coercive laws of competition” at work.

The argument here is trade dress- Would the average person be confused by the gestalt- it is not an examination of the details, rounded rectangles, bezels etc: Does the product confuse the user into thinking they are buying an iPhone? I think that Apple has a strong case.

Here in NA, people don’t buy their phones. They get them included with a contract for phone service. Therefore, it is the phone companies that drive the phone design, not the clients. Seeing as the iPhone has only been available with AT&T and now Verizon (am I wrong here guys in the US?), probably the other companies came to Samsung and said, “make us something that looks like an iPhone…QUICK!”.

Not the strongest case of defense one could make.

Aren’t customers of ours often unimaginative enough to send you a brief like that? My former boss sometimes gave
in to that, despite better knowledge. Those projects didn’t turn out too well. Nobody stands behind a knock off.

Nowadays I try to direct projects into a different direction, if somebody in our team stays to close to the default
of the “market leader”. It makes no sense to sell a different shade of beige. Better ask some questions and find a
different and better approach to the market.

P.S. : I liked that bit about market laws of cohesion!. And the I-phone is tied to one distributor over here.
T-Com, which once was “Deutsche Post” and was the sole phone vendor. They nearly bounced back to former
glory with Apples help… But their customer service is still non existent…

What would be different enough?

First, I haven’t read the lawsuit, but the discussion here seems to be assuming that infringement is happening on a design patent because of how it looks (as opposed to a utility patent for how it functions).

That being the case, what would be different enough? The functional spec for all these phones is going to include a capacitive touch screen, a mic below it, and a speaker above it. It’s a consumer product so of course it’s going to be rounded at every point.

People keep designing new hammers, even though they all look scandalously similar to the original.

I’ve never heard of anyone having to pay after being litigated for infrginment on a design patent.

But then again, maybe they have.

@loughnane http://www.thefreelibrary.com/Black+%26+Decker+Wins+Infringement+Suit.-a053236901 -Dewalt wins a suit based on the combination of Yellow and Black
http://www.hoffmanbaron.com/press/trade_dress.html -info on trade dress and design patents

Thats the point- as opposed to a patent- there is no objective measure. It IS hard to quantify and that is why the lawsuit calls out many specific design details- but if the average customer cannot tell the difference Apple has a case of trade-dress violation. Someone really attuned can tell the difference perhaps, but the average customer would have to have that same level of discernment for Samsung to say it is not infringing trade dress. Trade dress and design patents are two different things. They are related but not the same.

I suppose to quantify this you would need data that shows what the level of confusion is and what possible Extra cost in advertising/education this incurs to Apple.

Those are some good links, thanks. I’ll have to read them tonight.

I think you hit the nail on the head; you are trying to quantify the qualitative, and it’s difficult. Reading the black and decker summary got me thinking that color is an easy thing to change (and obvious thing to notice), whereas packaging for components of an essentially fixed volume (processor, LCD, speaker, etc.) are more difficult to change (and more subtle).

I’ll have to dig around and see if I can find patent litigation regarding the latter.

I think Apple will lose on trade-dress as their push. Location of functional buttons, addition of other functional interfaces, prominent branding location of ‘Samsung’ and improvement in contour of the hand interface surfaces (rear) provide adequate differentiation.

I was at DeWALT when that trade-dress suit was active, the Chinese competitor didn’t make any effort to improve their products or highlight their brand, they simply chose a yellow close enough to DeWALT yellow (which has its own PMS, I might add!) and included black to a matching proportion to the DeWALT products and tried to pass them off. Not similar to this situation IMHO.

Apple’s just mad that their market share has leveled off with the iphone (and will now drop over the coming year) and they know the same will be the case with the ipad by Q1 2012 as the Android tablet explosion begins. 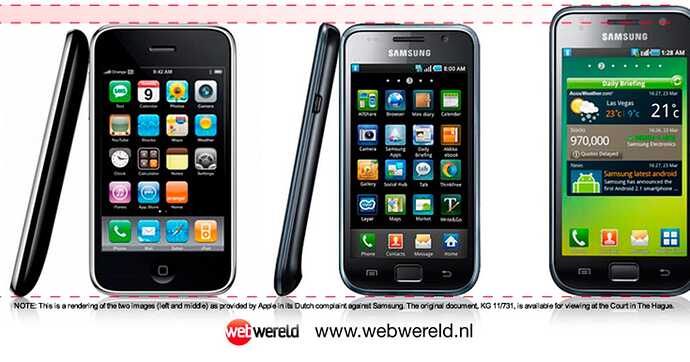 Apple may have manipulated images in Samsung case

Apple allegedly tweaked an image of the Galaxy S smartphone to look more like the iPhone 4, and presented it as evidence that Samsung's phone looks too similar to its device.

Don’t tell me samsung isn’t being a little cheeky here.
Remember this? 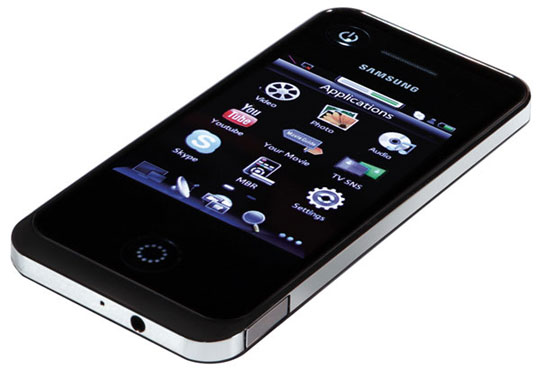