Linda: I agree with you too.

I took a couple minutes during my afternoon break to look at the Pentagon some more. Really innovative building.

Built in 1941-1943. The layout was actually because of an awkward piece of land that the design was to originally be on, and was kept out of convenience when the site was changed.

Architecture: It has five floors above ground, two below. It is built in five rings with a center 5.1 acre courtyard . This isn’t without reason:

[quote]As originally built, most Pentagon office space consisted of open bays which spanned an entire ring. These offices used cross-ventilation from operable windows instead of air conditioning for cooling. Gradually, bays were subdivided into private offices with many using window air conditioning units. When renovations are completed, the new space will include a return to open office bays, with a new Universal Space Plan of standardized office furniture and partitions developed by Studios Architecture.[quote]

Also notice that this form really gives the largest amount of natural light. In the Apple HQ, there are always going to be places cut off from light due to the next floor above and office walls. The concentric rings really give the most, even if the views from the interior are less than ideal.

Lastly, is the transportation problem. Supposedly, the longest walk in the Pentagon is less than 7 minutes.

As for my comparison to the Apple HQ, It occurred to me that a circle can be constructed by fileting a pentagon. Wow…even on their buildings…

Jobs claims that most of the parking will be underground. This is a very new idea to architecture in that area. When the rains come in February there in Cupertino, there will be a mad scramble to find the parking spaces that do not drip sediment on your new Tesla roadster.

Underground parking design is a wonderful concept, but the materials and structural engineering of such a concept still leaves a lot to be desired.

That’s a good point - In Savannah the city was/is attempting to put a three or four level parking garage underground where it was previously above ground to restore the park that was once there. The first Contractor Quit. It sat for months before they found another contractor to take on the challenge. I’m not sure what the fate of that project is now since I’m not in SAV anymore, but building parking garages underground is not as easy as it sounds - and that wasn’t even going to have a building on top of it, but if anyone was going to do it correctly, I imagine it would be Apple.

Anyway, I think the building is beautiful and would be awesome to work in. Apple is all about futurism, and my personal opinion is that the analogies to spaceships are probably closer to Apples intent that to the Pentagon, but I can see how analogies could be drawn.

You guys don’t have underground parking garages there? They are pretty standard. Pretty much every building here has them, usually 4-6 or more levels deep. Even under 80 story buildings. Dunno what the challenge is. I don’t think it’s anything new…

Exactly R. Sure, it might be slightly more difficult with earthquakes to design a worthy structure, but it’s by no means difficult. In Savannah it would be tough because of the extremely sandy soil and high water table, but Cupertino California is a completely different animal. It’s nothing some giant excavating equipment can’t handle.

Richard: we are gifted in Eastern Canada to have very firm and geologically stable ground to build on and in. The permafrost also helps;)

I just googled “california underground parking garage” and got tons of hits. I don’t think it is that special or geologically related but I could be wrong.

My hospital here in SF has 6-7 floors of underground parking and the building above is, I think, just 5 floors. Actually, if I recall correctly from my CE student days, underground parking for skyscrapers is pretty much a “freebie” since foundations/footings for these buildings are placed deep into the ground anyways.

I was excited when I initially saw the concept plans for the Apple Spaceship as it for some reason reminded me a bit of the McLaren Technolgy Centre McLaren Group. I think Apple has an opportunity here to build more than just a nice big campus and I hope they take a big risk and really go for something insanely innovative.

Eddison: I forgot how cool the McLaren tech centre is.

As for parking: I have no idea what kind of soil/bedrock exists in California. Eastern Canada has a lot of granite bedrock from when it was more geologically active. I would guess California too, considering the faults. 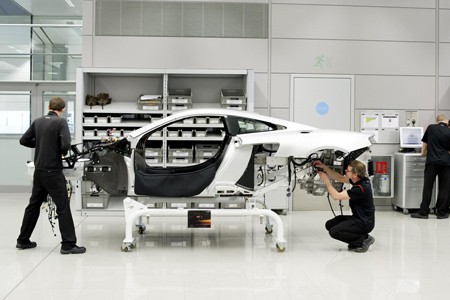 Nice. Looks like a place where they’d pipe in Kraftwerk 24/7.

Foster + Partners looks to be the architects - same architects that did MTC. This could get interesting, especially if Jobs handles the design and approvals like he does with the apple products. 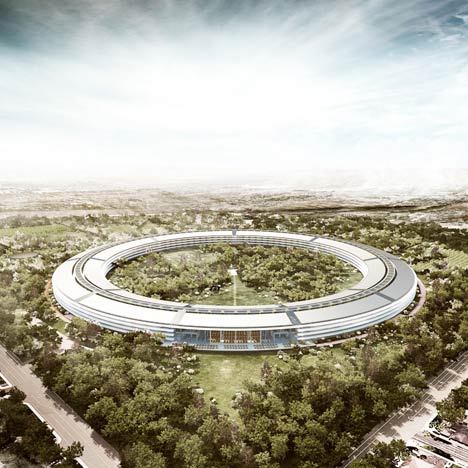 Here are some new images of the Apple campus by architects Foster + Partners, to be built in Cupertino, California. The hoop-shaped office building will be located a few blocks away from Apple's existing headquarters and will accommodate up to 13,000...

There’s a cool article from Forbes… 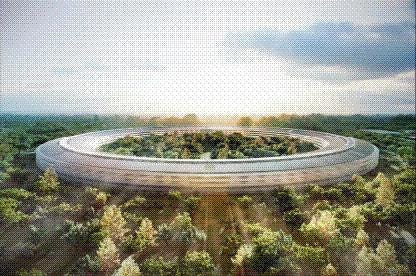 One of the disappointments of life in modern California is that we don't build crazy stuff anymore. Disneyland, Shasta Dam, and the Golden Gate Bridge are wonders from another era, elaborately maintained. Sure, the eastern span of the San Francisco...

“One of the disappointments of life in modern California is that we don’t build crazy stuff anymore.
Disneyland, Shasta Dam, and the Golden Gate Bridge are wonders from another era, elaborately maintained.”

One year behind schedule and roughly $2 billion over budget.

Did anyone already point out that these figures equal an investment of around 500k Dollars per worker? This is astronomous. For this kind of dough victorian industrialists built whole cities, including church and hospital!

The Apple/ Foster plan to built a spaceship, that will never take off, sounds like a really “dopey idea” in comparison. Obviously no one was questioning Jobs during his last months, which is very human but could prove very wrong, also.

While the attention for detail and resulting quality may be appropriate to high end consumer goods it will prove merely
inappropriate for an office building. Sorry, the thinking behind it has too much resemblance with what any good dictatorship would want to build.
mo-i

I have to say, this isn’t just a tech problem. The Sear’s Tower was built when Sears was predicting high growth and had alot of employees taking phone orders. When completed, it stood half empty for decades.

It seems as though there is a certain group mania that infects organizations. When you are the biggest anything, it seems like you should start planning on shrinking rather than growing more.