I want to know if I’m the only one.

When I saw this:

I immediately thought of this:

You know, for kids!

Yeah maybe, but it resambles the Nazi UFO starships even more so.
*
And it doesn’t have a car park attached to it.

You know, all those hot Apple developers ride their bike to work, as Ive wrote
a raincoat app for them.

Circle is the new square guys.

Do you think there is an app for flying that thing or do you just have to do it manually.

I don’t see it. I see Chinese Hakkas and supercolliders.

Did you watch the video of the presentation to the Starstruck Fanboi Council? “I have an ipad Steve, you are so awesome, can you give us free wifi?” Embarrassing…

Jonny Ive can only work in a continous fillet with uniform wall thickness.

It would be better if it had a bite taken out of it.

Amazing. I love it. I think it is a natural extension of what Steve has built. For years the brand principals have resided in individual products, and slowly evolved into manifesting into a greater Apple experience, but now those principals will be embodied in a place, a physical home. Pretty awesome. he way he told the story was pretty compelling.

I watched the vid and was pretty appalled by the panel he presented to. He could have said, “Im steve jobs, this is my new building. Deal with it.” And they would have still bowed down to him. Pathetic. At least they had a lot of thought put into this, and considered more than just the building. The parking structure is actually underground, which allows for all the vegetation. Im sure it is costing them a lot more to pull it off, so I cant really rip on them too much for it.

How great would it be to get walk in that giant courtyard midday or just to take a break? I love it.

+1 on the courtyard. Wish I had something like that I could walk out into and eat my lunch under an old oak tree.

I see a particle accelerator though. I only see a problem with getting from point a to point b in the circle. I guess if they took the time (which apple probably would) to plan everything perfect, then you wouldn’t need to get everywhere in the building, just to relevant areas, maybe in 15-30 degrees of the circle.

I can see the particle accelerator, but that viewpoint is the bird’s eye. I think the other, more contextual images do a good job of conveying the feel of the building, which I like a lot. 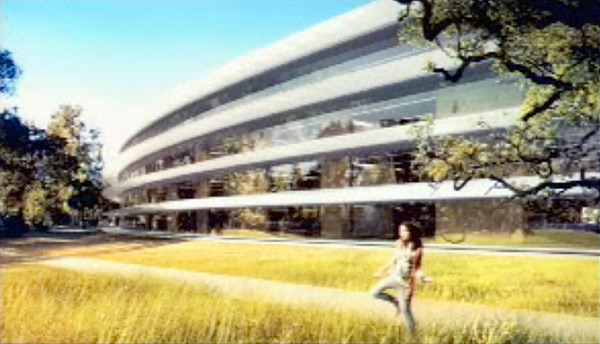 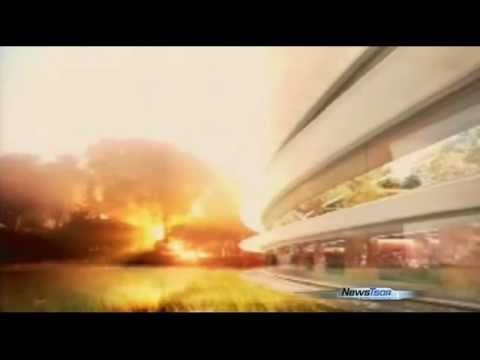 Jobs was a hippy who rebelled against the “man” through stealing phone service and distributed computing. Now, 30-35 years on, he wants to build a big centralized building that forms a simple geometric shape from above, a little bit like that evil building that was the centre of hippy rage, the pentagon.

Just ironic on so many levels.

There are going to be large amounts of offices that are always in shade, others that will have constant sun in them. I’ve never liked buildings with nothing but windows all the way around for this reason. I’m sure there will be offices that will have their blinds closed the whole year round, wasting all of the window space.

Similar to their recent products, it seems to be a rigid geometric ideal forced onto a squiggly, complex world. Honestly, I thought Apple was smarter than this.

@Mr-914: Sometimes a building is just a building.

Well, Linda, I actually believe, that Ray is onto something here. The pentagon analogism
didn’t catch on the first time arround. But the questions above should be seriously taken into account.

I am very keen to see how this project evolves in time. Some of the most radical architecture has
shown not to be up to the tasks of everyday use and therefore got tweeked until some heritage trust of the
future rediscovered the original plans.

Will the same happen here?

Sure, practicality is a really important issue. I work in one of the buildings that’s about to turn into that spaceship. From a practicality aspect I can’t wait to see how this new building improves work life at Apple. Right now, the problem with sunlight is that there’s not enough as opposed to too much. This is cupertino we’re talking about here where it’s 73 and sunny no matter what angle your office is pointed at. People vie for those spots, since it completely beats working under fluorescent lights. It’s the same situation as infinite loop where prime spots are the exterior offices with giant windows. Since we don’t know the interior layout of the building, it’s also really hard to judge how much of that exterior wall is going towards offices as opposed to reception or cafe areas.

I’m also excited to see people use the outside landscape and shade from the trees being added for physical recreation and eating. Right now, no one uses or ventures into the grey areas between buildings (mainly because it’s all just spans and spans of parking lots). Having a consolidated park area with delineated paths will definitely encourage people to get out more. Not to mention, communication and transportation between departments will be greatly aided by the shape of the building. No more jumping on 3min shuttles to get from one place to another (which is a really big waste of gas as well). The campus will actually seem unified.

For me it’s just an extension of what infinite loop wanted to be back when it was built. This new building is actually what I pictured in my head as a headquarters that Apple would be housed in. It applies the same principles as the infinite loop building: symmetry and equality between all departments, respect for the cupertino neighborhood (it’s not even taller than the adjacent mall), and just plain simple beauty.
It also just fits into Apple’s mantra, whose product and architectural endeavors (glass elevators, underground stores, completely touchscreen hardware) have never really screamed “practicality first”. It’s not for everyone.

It also doubles as a giant sundial.