Anyone know anything about Auxiliary Vanishing Points?

Me again. I have a project due next week in which we have to sketch a cordless drill that has an incline to it. Well, this one surely has me stumped!! I have heard of Auxiliary vanishing points before but am not sure how to do them and how they relate to regular vanishing points on the horizon. Can anyone explain how I would draw something like the image I have attached of a drill, in perspective, if it has an incline like that? I really need some help. 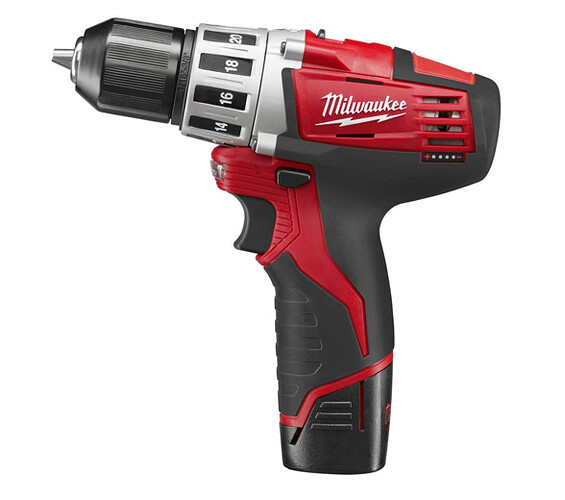 just fudge it. You don’t need another set of vanishing points. The inclined form still fits into a rectangle in the same perspective.

Aux vanishing points? Never heard of 'em. Stick with one or two-point perspective.

Take a look at the preview clip from Scott Robertson’s perspective drawing DVD. Notice how he “extrudes” 2D shapes (like the outline of your drill) into a simple box that’s drawn in perspective. That’s a great technique, because it’s essentially the way of thinking about carving a shape out of a block. So start by drawing the drill as a bunch of cubes, then go back and draw the lines you’ll use to “carve out” the blocks.

Syd Mead uses a lot of multi point set ups, but their construction is tricky.

I’m with the “fudge it” camp. Never used a set of second VP’s in my life.

Once you get comfortable enough in sketching regularly you’ll never use a vanishing point again. Sometimes I’ll mentally place them in my head but when youre drawing your vanishing points should always wind up off the page. An early mistake students make is putting them on the page, and you’ll see all their drawings wind up in a “forced” perspective that may be “correct” 2 point perspective, but does not look realistic.

The Scott Roberston block technique is good if you just do some faint outlines for the block that defines your main body and handle, then cut away from that material. If you have a light box/window/mirror handy a good technique is to learn to flip your page over and look at the mirror image. Your eye gets very used to perspective mistakes when you look at it from 1 direction, but when you flip it it becomes much easier to see mistakes. This is easier to do digitally, but it’s still valid to do on paper - especially when learning. If you have a light box you can even flip your paper then draw on the opposite side or do an overlay in the opposite direction to correct mistakes.

A drill is a fairly organic form if you do something like that, so as long as your forms fit into the space they should it should be a lot easier to keep it looking correct.

I have Scott’s dvd’s (Basic Perspectives Form Drawing) and you are right… he does show how to do complex forms starting from the center line and out, as if either carving or adding to the form. I actually know HOW to do complex forms, but I was too busy bogged down by the idea that this DRILL was angled that I thought I HAD TO use auxiliary vanishing points, but I don’t really need to. I ended up drawing the outline of the drill (with the incline), on the center line and worked my way out building the form, if that makes sense. That’s how Scott does it in his video.

In one of my previous classes a few semesters ago, our professor had us draw a desk with a flip-up top and I am still in that “desk mode”, because for that type of construction, we were introduced to auxilliary vanishing points and she had us use them for that “flip top” construction. I guess if you want it to be accurate, one would go all the way out and do the Aux. VP’s, but you guys do have a point in that one can still fudge it and make it look believeable.

Thanks to all who responded.

Yeah - no ones asking you to draft a sketch. It’s important not to have any glaring mistakes because people will pick up on them, and it won’t be as clear how to communicate your design. Thats more on you as the designer to pick up on your mistakes and fix them. Thats why you start drawing light then build up your lines. Even if you screw up a bunch you can just go over with a bolder line in the correct spot.

Thats one of the reasons so much of intro drawing classes is usually just sketching boxes, so you start to commit your brain to understanding where things in space should go. I saw a student when I went back to visit who was still using a ruler to draw straight lines and the professor let him “Because his drawings were OK”. I looked at his neatly constructed sketches and they were just awful. Perspective too forced because of the “Vanishing points” and everything was so rigid and soul-less I wanted to smack the kid with his ruler.

so lets see that sketch already!

… I wonder if enough of them check this site to start a new chat category?

I will scan it this week and post it up! It’s not perfect, but I think I got the jist of the principles enough to satisfy the requirement for the rendering. hehe. It’s due today! Wish me luck!

By the way, this morning as I was pulling an all nighter, to get this rendering done, I discovered that if you apply a cool gray marker first before you apply your color (in my case it was reds, Copics, r24, r27, r29), the colors are more vibrant and they just look great with the gray under base! I got the idea from this video. Concept Sketching tutorial 01 - YouTube

Yo, do you ever do the same thing? And why do they apply the grey marker down first before apply the blue marker? Oh, FYI, the greys I used depended on how dark the color was, so for my r24, I used a grey 03, for the r27- grey 5, etc… Any idea why it works and why they use that method in the video clip?

Thanks and have a nice day!

That’s the old school way that us mid 90’s graduates were taught but be careful, the colors can start to look real muddy really quickly. Nowadays I think people will just use the technique of allowing the original color to dry then going over it (giving you about 3 good shades from one marker) or actually using a darker color marker for those shadow areas. Anything trying to be more accurate than that is being moved to digital.

I’ve never done laid greys down first, but whatever works the best. All nighter? Try not to let your rendering take more than 2 hours. If I spend more than 45 minutes, that is a lot for me. I’d recommend getting your line work right, then photocopy it 5-10 times, and do a few quick 15 minute practices before really polishing one up.

I am curious now if in that clip that I uploaded to my post, the renderer probably didn’t have different values of blue marker, so that’s why he put down gray marker to darken the shadow areas? I guess that would work if you are limited to only one shade.

You are right about the grey mixed with lighter colors. It did turn the colors in my rendering a bit muddy. I will scan and upload it as soon as I get it back from my professor and graded. I think I will just stick to the 3 shades I have already and maybe some colored pencil/pastel. When I invested in my recent Copic collection, I ordered them individually as opposed to buying them in a set and made sure each of the three shades of each color were about a 20 percent difference between them.

PS- Yo… I only did an all-nighter because I am still a newbie at rendering but as I get better at it, it shouldn’t take me that long. I actually spent about 3 hours on it. Hopefully soon, I will be down to 45 mins! It’s just that I started at at midnight!