Anyone ever get injured Skiing/Snowboarding?

I’m in the middle of working on my senior project, I graduate in August. I have decided to design a new Rescue Toboggan for Ski Patrollers.

I have done plenty of research this past semester and am in the ideation/concept phase right now. My concept direction is based patient comfort/accommodation.

I was wondering if anyone had a story they’d like to share about being injured on a mountain. Anyone have to ride down in a Rescue Toboggan before?

I thought maybe thowing up a post would be a good way to have some interesting stories to guide my development.

Personally, I have never been injured, but my father dislocacted his shoulder snowboarding w/ me about 10 years ago!

Any kind of experiences or information you guys want to share would be greatly appreciated.

A couple of stories-

Wife two years ago warming up on her second run at Jackson Hole, WY on the start of six day trip when she got going too fast, leaned back, corssed skis, ended up with a complete tibial plateau fracture in right leg. Surgery, five screws and an eight inch plate holding the knee together.

When she was hurt, she wasn’t too far up the hill (Apri voiux run), so the sledding down the hill wasn’t too bad. The sled did not have any room to hold gear (her skis, backpack, poles) so myself and another ski patroller took them down. It wasn’t that steep, so only one patroller guided the sled down. But the sled was set up with a back rope for a second patroller to anchor the back if it was steeper.

The sled was tight as they had to put an air cast on her on the hill to bring her down. She was going into shock, so a warmer blanket system may be something to consider.

Also, the ride was very bumpy as they had to cross a lot of territory. The bad break bounced alot, and she almost passed out once-don’t know if you can do anything about that.

A couple of us were in back bowls of Kirkwood, CA ten years ago when one of my buddies ate it, tearing his ACL. Ski patrol put him on a standard sled-we were on a real steep run, so just getting him strapped in was a real pain in the ass. It took three of us to hold the sled and two patrollers to lift him into the sled just to keep us all from sliding down the run.

Getting him down the run took three patrollers, one in front and two in back. He was really jacked around because of the terrain.

But the real hard part-and one where design would benefit- is when they had to load the sled on a lift to get him over the ridge. Often times you get hurt in the back country and there isn’t a straight shot back to the lodge. You have to ride a couple of lifts to get back and unless they have a snowmobile to tow you over the top, the lift is the only way back.

They set up a rig on the chair , strapping the sled to it. This stopped the lift for close to five minutes on the load and unload-pissing off skiers waiting in line. Plus now he’s on a lift solo for however long the ride takes.

These are just two instances I know of for design parameters on a sled detail. I’ve seen and experienced and bunch more, but this help get you started.

Dislocated my r shoulder going a bit too fast at Hood Meadows a few years ago. Sat in the snow and waited while my buddy went to the bottom, had to ride the lift back up because no Patrollers were there, and then cheerfully got on the sled down the hill, only to ride the lift UP again to get out of the bowl.

Best part - dumb-ass stoner lift operator guy at the top, talking to his friend, neglects to STOP the lift where I need to get off. I can walk fine, but the fact that the top of my humerus is pressing into my ribs about 3" below where it’s supposed to be makes it hard to breathe, as well as painful. Since the lift couldn’t or wouldn’t go backwards, I had to JUMP three feet off the lift to the icy ground. Ooooh.

Then was the ride to the mountain on the back of the snowmobile, holding on to the guy with one arm while he flies down the hill. Easy for him, scary for me since 1) I’d never been on a snowmobile and 2) I had a freaking dislocated shoulder. Best part was popping it back in; a hot nurse said “just melt into me” and wrapped her arms around me while the doctor yanked on my arm. Since it was 20 minutes or so after the injury happened, the recovery took a long time; shoulders are best popped right back in - the longer you wait, the more damage occurs.

I dislocated my patella, and tore my ACL while skiing in STEAMBOAT a few years back…

there is a really cool scissor style tobaggen out on the market right now that completely eliminates moving the patient around to get them on the sled. i certainly think you should check it out, or try to find it. other than that, just try to design it so it offers a “cushy” ride down. less bumping and jarring.

however, its the ride down that is the problem, especially because the ski patrollers think they are hot shots, and ski like it, regardless of who or why they are dragging and injured patient behind.

my thesis project at school tackled that same issue. check it out, its with the rest of my product portfolio http://www.jgabry.com i called it the YETI.

and let me know if you had any more questions.

this isn’t exactly the stretcher/tobaggen concept i was talking about, but its similar. 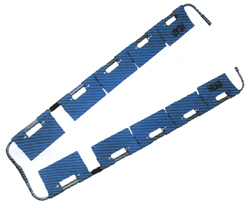 in addition, i appologize to everyone for the consistant mispelling of the word TOBOGGAN.

I appreciate it that you’ve shared some good real situations and interesting incites. I originally didn’t even know if I would get a reply. Its really great getting these stories told to me by other designers!

I looked at your site before, ironically enough, I never looked at the Yeti project. Thats really sick, its cool to see someone else thinking of the same ideas. I myself designed a low-speed urban vehicle last summer and it had a similar form as your Yeti.

By the way, very tight sketches, I like your style.

THANKS for the kind words, its always nice to know somebody out there likes what you do. I appreciate it. …now if I could find a JOB.

As for the YETI, I think those of us who responded to your post, or have injured themselves skiing/'boarding before certainly have tried to come up with a better solution to get down the hill.

so others won’t have the same miserable experience we had, thats why we are designers.