Anyone else sketch weird stuff?

I tend to sketch a lot of weird creatures and things when I’m not working on any product related stuff- It’s fun and relaxing I think. Lots of giant squid, jellyfish… and really ugly gross little animals that don’t really exist.

Anyone else do this?

Here’s one I did around New Years- it started off as a cooked turkey and uh, evolved from there. I named him ‘stubbins’

Dude that is pretty sweet.

Here’s another one I found… Don’t have much of it scanned yet. Creepy face I doodled one day.

for sure, i have a tendency to add animal heads to human bodies. the other day i drew hunter s thonpson wearing a speedo, with a cigarette and a beer in his hand… a farmer with no arms.

for a while i was really into this starwars sketch book i found. i started creating all kinds of alien droid evildoer animal thingies. and space cars.


i don’t have any of the good wack sketches online. none of the starwars theme stuff made it either.

It’d definitely be cool to see… I’m putting mine together mostly because I’d really love doing design work for any part of the entertainment industry. I think almost every page of thumbnails i’ve ever drawn has -something- weird on it. Usuaully some kind of squid (tentacles are fun!)

I’m thinking about putting together a site or something with mine, I’ll probably keep it separate from my ID stuff for now though.

I like your clean style though. That page reminds me of a storyboard.
The Hunter S. Thompson thing reminded me of this artist who paints very unusual, but realistic stuff: Brandon Bird: "Lazy Sunday Afternoon"

that guy’s stuff cracked me up.

Haha yeah, I’m tempted to buy a poster of “Bad Day on the High Sea”.

Thanks too for the comments yo. I was taking a look at some of your sketches on the boards- very nice! It’s also good to see someone that posts when they have something positive to say, or some good constructive feedback.

for some reason when I saw the Christopher Walken image, I thought of the Miguel Calderon paintings from “the royal tenenbaums”

My wife convinced me that there’s a huge trend towards weirdness right now.

This is pretty evident in TV commercials, cartoons (especially the kind on “Adult Swim,” but even the Simpsons), and of course on slogan t-shirts.

She’s convinced that to succeed as a producer these days consists primarily of shouting “not weird enough!” to the writers. I think she’s right, and I love every minute of it (she’s not a fan.)

PS, that “Everybody at the beach!” link today rules!!

For weirdness both drawn, puppetted, and acted, I gotta say WONDER SHOWZEN on MTV2 is the funniest thing I think I’ve ever seen.

Take Mr Bill from old SNL, combine with Jackass and the grossness of all the animal kingdom can offer.

G-man you might have a place with them, if your weird creatures can grow scabs and pus-filled ulcers.

My wife convinced me that there’s a huge trend towards weirdness right now.

This is pretty evident in TV commercials, cartoons (especially the kind on “Adult Swim,” but even the Simpsons), and of course on slogan t-shirts.

She’s convinced that to succeed as a producer these days consists primarily of shouting “not weird enough!” to the writers. I think she’s right, and I love every minute of it (she’s not a fan.)

Has anyone seen that weirdly great Brawny ad? 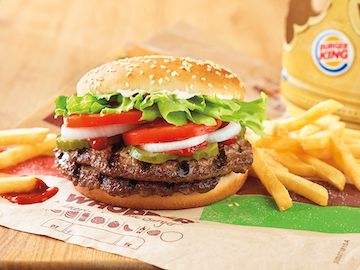 Get access to exclusive coupons. Discover our menu and order delivery or pick up from a Burger King near you.

I believe we’re entering the Viral Age in marketing.

I believe we’re entering the Viral Age in marketing.

That’s a really great reason for weirdness.
Viral marketing only works if you’ve got something really different.

the new burger king ads are plenty weird too, you’ve got Darius Rucker as a cowboy singing country songs about bacon cheddar ranch or something and Brooke Burke on a swing…let’s not forget about the King

The King is awesomely creepy

…have breakfast with the king…

…to lazy to scan my sketches, illustrate anything weird?

I really love how threads go off on tangents

makes for much more interesting reading!

I love the new Burger King ads-- especially the ‘breathing’ one with the King and Darth Vader. They definitely are doing a good job of separating themselves from the McDonald’s style ad’s that everyone seems to be doing these days.

The Hardy’s thickburger ads still make me gag though.