Any of youse watch Silicon Valley?

Because they are currently ripping IDers.

Love it.
Didn’t know the new season was running. Thanks!

Fantastic show, literally one of the funniest around. Didn’t know it was back on, cheers for the heads up!

I’m overdue for this season as well, but it’s a great show. Can’t wait to see their stance on designers.

I haven’t caught up on the new season… first two had me practically falling out of my chair. I have a few friends up in Silicon Valley who can’t watch it… too close to home

I heard an interview with Chris Sacca (Silicon Valley finance guy) a few weeks ago where he kept saying, “You know alot of billionaires, there’s alot that aren’t very smart.”

Everything by Mike Judge is hilarious. From Beavis & Butthead to Office Space.

The season finale of the first season is one of the funniest things I have ever seen on TV.
I am a huge fan too.

But yeah, having lived in SF, I can vouch for it’s authenticity and a lot of it is almost painful to watch.
That mustache segment earlier in the season was great too and really illustrated the absurdity of the business.

I believe to remember that Judge was a Silicon Valley engineer for a while before he switched to writing full time.
So he speaks from experience.

Just binge watched the beginning of the season - great.

“If your box were an animal what would it be”

Yaah i love this show, i have seen all the seasons and every episodes.

Industrial design - the Stuart Smalley of the business world.

But here is the real killer after that first clip.

Silicon Valley: If the Box Were an Animal (Season 3 Episode 4 Clip) | HBO - YouTube

When you (a product designer) are being satirized in a room filled with chairs your friend designed…too freaking Meta. 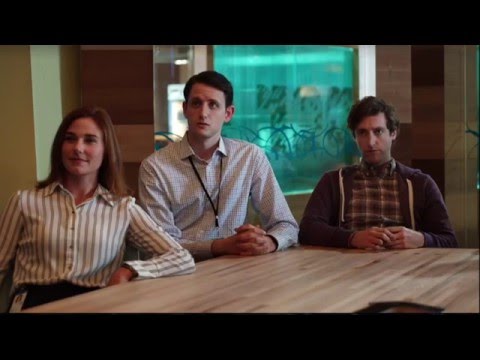 Ugh, they disabled the playback. The link works though: Silicon Valley - sales and product - YouTube

Best show on television, I have a few friends that work in Silicon Valley and they say how accurate it is… that’s the thing about Mike Judge, is the reason why he is so funny is he doesn’t actually create new content… he just shows us what’s real and how ridiculous real is sometimes.

All of the Erlich / Jian Yang interaction scenes are pure gold.