I recently graduated with a degree in architecture(Upenn), but have decided to go a different route. I have been working in the architecture field for a couple years, but my love of footwear and sneaker culture has taken control of my life. I will be attending the Academy of Art in persuit of a master’s degree in industrial design. I was wondering if there are any footwear design firms in the San Francisco area offering internships, though I am not sure that my limited experience would warrant me one. If that is not an option, what other industries in the area do you recommend looking into for experience towards my ultimate goal of being a footwear designer?

Another idea I have been tossing around is finding a unique shoe store, preferably owned by a “sneakerhead”, and trying to get a gig there. I figure that may be a good place to start by learning the trends and when the new kicks are coming out. Also hearing about those limited editions and their stories. Anybody have any interesting experiences in starting a career in footwear, outside of the big name internships?

Iam from the Bay Area and attend CCA, California College of the Arts and majoring in Idustrial Design. There are not alot of shoe type companys in the bay. The only company that looks for shoe designers or interns for shoe design is North FAce. Getting a job in a sneaker head shop would not be bad but must go in knowing what you are trying to do. But before you can do anyting member its all about the drawing and what you got and can come up with. Post some of your work or just a sketch to see where you stand at. Get some feedback from some shoeheads to real designers. The Academy is a good school i heard…dont know much about their master’s dep. But hit me up or just ask away on the board if you got any questions.

Here is my design for the Phenom/Tiger Woods theme on Kicksguide. Check it out and please give as much advice as you can. Here is a little backgroud on the design:

This shoe was inspired by Tiger Woods’ Asian culture. Though he himself he very soft spoken, he is thought of as an ambassador for both his African American and Asian brethren. Often thought of for representing the African American in golf, his Asian heritage is often over looked. The symbol wrapping the shoe is the symbol for tiger in the native language of Thailand. The shape is partially inspired by the shoes of the samurai, synonymous with, though not exclusively of Thailand, Asian footwear. The shoe evolved into more of an all-around street shoe than a golf shoe. This kind of goes along with the idea that Tiger has many interests outside of golf; surfing, skiing, spear-fishing, etc. 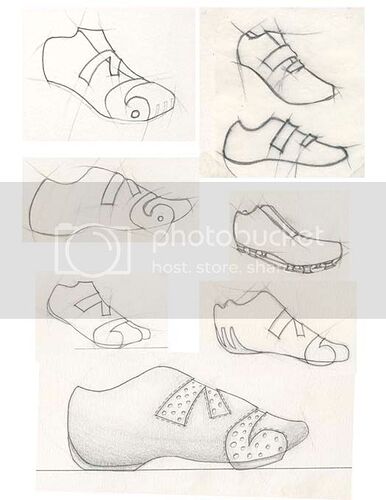 Script, I really like the story behind the shoe. Taking a stab a the whole Hapa perspective with Tiger Woods is a great idea. Can you post an image of how the symbol for “tiger” in Thai looks like as a reference? Good luck man

I can not get a large enough image of the symbol, but this is where I found it.