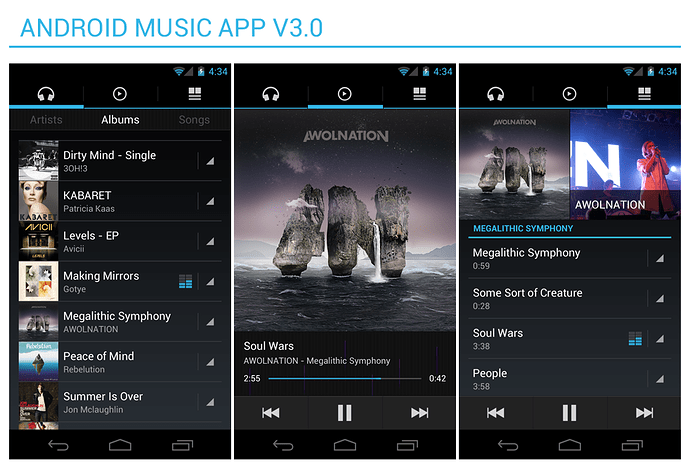 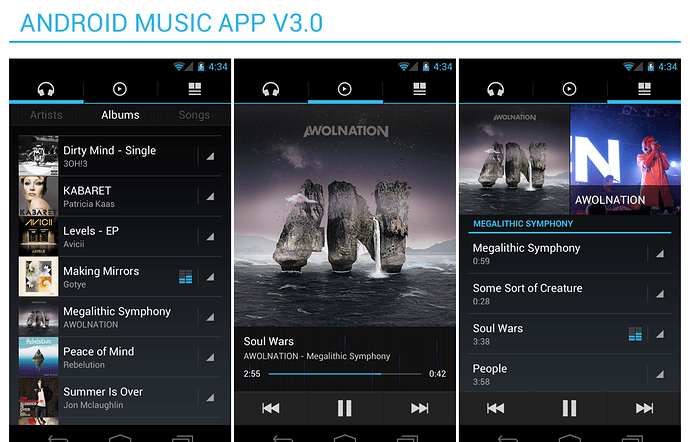 Over the past few months I have been working on an Android Music Application with the new style of Ice Cream Sandwich now that there’s a guide and a name “Holo” I decided to go back and make the third revision of the design, this time I have designed the complete App instead of just the key main areas. 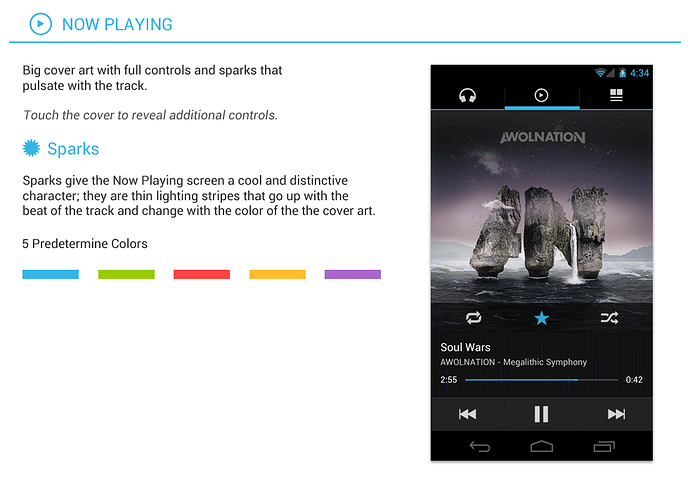 My goal was to make simply the best mobile music application, easy to use yet powerful and immersive. From the top level of the application you can find, play and manage your music without hitting the back button once but if you go deeper you can access your artist latest tweets and photos on an intuitive way (check the blog to understand this better). 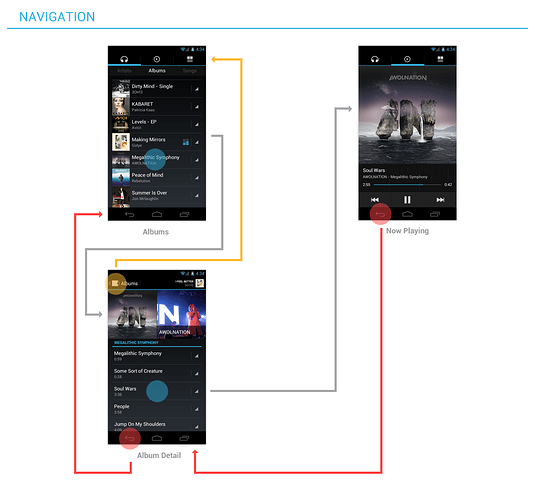 I’m very happy and confident in the way the whole design turn out, I’m also eager to hear your opinions Ice Cream Sandwich users, would you use this design instead of the official one?

To see the past two revisions check the post on my blog: UI Music: Android Music App V3.0

In all honesty, I’m not seeing a big enough difference in the app design itself to want me to use this. Paging through and comparing it to the real app (which I have to do to notice any difference of the top of my head), I can see you brought some changes to the way things are organized, but overall the app feels very much the same. I don’t see a lot of solutions proposed other than visual changes (which are mostly ported over from the People app design as well as the Gallery).

I’m sure you’ve seen this, but I’ll post here just in case.
http://www.seeingpixels.org/2012/01/cyanogenmod-9-music_16.html?_escaped_fragment_

He’s been adding a lot of functionality beyond just the visuals. I think you could go into some more of the user interaction of the app and less into the design. I feel the current app is strong in design (so is ICS in general), but some of the UI is still not the best.

Also a big deal-breaker here is the lack of Google Music integration. I realize that it’s not possible to include that because Google hasn’t released the API for it (and they may never), but the lack of that would cause me to not use it regardless. I don’t store music on my phone anymore, and it’s mostly streaming from Google Music or Spotify.

Let me start by saying I really like the work Matias has done on Android; I closely follow the design guide he made to work with Holo in which spacing and styles are clearly detailed and defined to make the applications look seamless integrated into the new user experience introduced on ICS, reason why the application has a visual style and user experience similar to the OS (that was the point).

I’m confident in having achieved a design that’s more intuitive than similar applications as an iOS user it takes two back buttons (taps) to go from the playing track list to the music library and two more to go back, here is just one tap from playing track list to music library and the same to go back always with the option to go to the now playing screen one tap away, that is the fundamental design of the application, that level of flexibility to cut hierarchy’s is what I’m most proud of this design while still adding new functionalities in a seamless way to the UX.

I understand. My goal was to simply challenge you to look beyond the basics and high level interaction of the app into things that really make the app much much better.

In terms of what you’ve done, pressing on button to get back to the library from now playing is nice, but it has come at the cost of the search button. You could argue that it’s faster to just use the search feature (like from any point in ICS) to get where you want to go more efficiently. In fact the search button is missing from your screens of the app entirely. In terms of getting to now playing from the library/playlist, you can do that now in one click. Just tap on the now playing song/artist at the bottom of the screen.

I think it would be worth while for you to show the pulse feature in some way. Maybe make a gif or something to help demonstrate.

Search functionality is featured on the third screenshot of the main Music Library section (on the blog) along with the change “view” icons; it’s accessible with a pull down gesture, that behavior it’s consistent throughout all the screens where search could play an important role like he Artist Hub, Albums, etc, where its functionality will be contextual to the screen.

Get yourself Keynote and do some animations. For UI like this, it’s always good to show videos to demonstrate animation. UI is not just about visual design or information architecture, but motion and sounds, too.

Search functionality is featured on the third screenshot of the main Music Library section (on the blog) along with the change “view” icons; it’s accessible with a pull down gesture, that behavior it’s consistent throughout all the screens where search could play an important role like he Artist Hub, Albums, etc, where its functionality will be contextual to the screen.

I saw it in the library section, but I was talking about search on the “now playing” screen. If you look at the current app, search is present on every screen. I tend to use search over scrolling through lists/grids because it’s often faster when sorting through 10,00+ songs.

Along with tarngerine, I agree that this would benefit from some video demonstration or animation. Best of luck going forward, look forward to any updates.

I agree that a couple of .gif would have help to show the design a lot better