An architect has designed the perfect car. Thank you.

Architects always know best, or at least they tell us they do. As the oldest of design professions (unless you count cave painting as graphic design), architects love to design things they aren’t really educated or qualified to design: furniture, housewares, medical devices and now cars. Zaha Hadid, the Gordon Ramsey-architect, has given us the answer to man’s mobility problems: The Z car. Apparently, she did no research into existing car designs, as that name has already been taken, but whatever. Here it is:

The three-wheeled, two-seater features an adjustable suspension that allows the driver to change the angle of the cabin to suit different driving situations. For city duty, the Z.Car will sit at a more upright angle allowing better visibility and enabling the coupe to fit into those notorious “compact” spaces. When traveling at a faster clip the cabin tilts back 10 degrees, decreasing drag and increasing high-speed stability.

Supposedly, a functional prototype manufactured by a British company exists and the developers maintain that the Z.Car could be available for purchase within a year for somewhere around $65k. 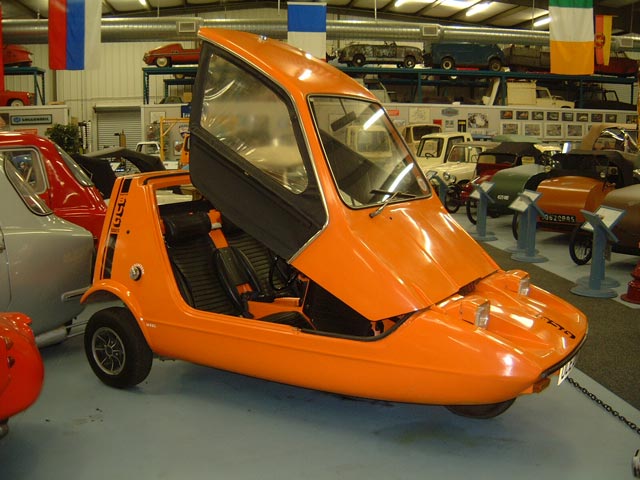 unless you count cave painting as graphic design

unless you count cave painting as graphic design

No No No, the cave men were developing the first pens and ink, the drawings were a bi-product of the R&D team. That’s Industrial Design!

don’t forget about this one 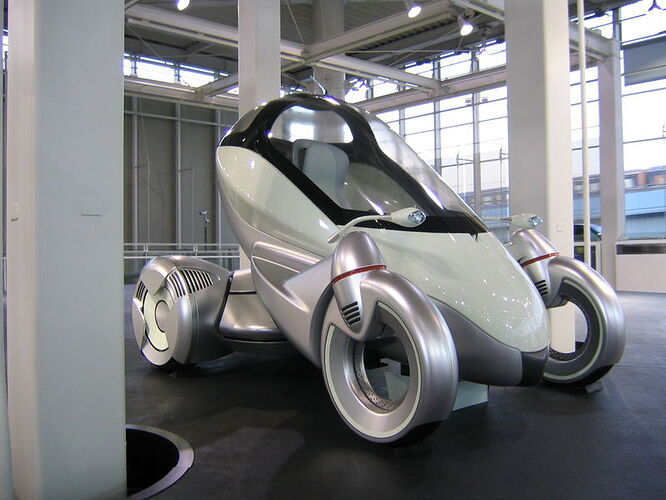 Copyboy: thanks for the reminder. The Toyota I-Unit is this same car, but actually designed by people who know cars. It features the same movable chassis that raises the car for parking or city manouvering too. Wow. If only someone dropped a few copies on Hadid’s desk, maybe we could have avoided this all?

I’m glad that my other comment sparked a debate as well. It is interesting to think what came first. My question would be how those cave paintings were made? Were their designed instruments (pens? brushes?) or were they found objects (bones? leafs?)? Of course, this goes even further. Without designed tools, man would never have had the amount of leisure time needed to be doodling on the inside of his cave. So really, product designers are the true gods of design. Why can’t I design a building then?

Why can’t I design a building then?

Some product designers have designed building i think. Ph. Starck, and J.m. Massaud (but his associate is architect…)

So yes it’s possible. (maybe the road is long…)

They might be other exemples of product designers who designed buildings.

Copyboy: thanks for the reminder. The Toyota I-Unit is this same car, but actually designed by people who know cars. It features the same movable chassis that raises the car for parking or city manouvering too. Wow. If only someone dropped a few copies on Hadid’s desk, maybe we could have avoided this all?

mr914: I think you have it backwards, the photo dropped on Hadid’s desk is probably what sparked the project

man that thing is under-designed. The wheels have a toy car from 10 years ago feel, while the body and interior seem to have little surface development or detail.

The Toyota is really nice, it would be awesome if they manufactured something like that with sport bike performance… still a little snoopy like in the nose, but the back wheel is really well done.


I still like the MB Lifejet, a litle dated now, but some bigger wheel would make it look hot:

there is always this little unit:

not a car designer, but sketched them over the years and doesn’t everybody eventually produce an egg shaped open wheel concept? I did, and seen lots of others.

Why do most over designed vehicles require spokeless / solid wheels?

I’m a horse drawn vehicle affectionado, and have to wonder what young men sketched a hundred years ago?

BTW, the prolific ‘Hansom’ cab was conceived of in 1834 by the English architect Joeseph Hansom.

Well what do you expect in a world where product designers “design” airplanes?

Got to run, I just signed a deal to design a new line of pharmaceuticals. When you see some gorgeous renderings on Gizmodo of a pill that cures cancer, that was me.

lmo: That’s an interesting insight. Of course, in 1834, there were no product designers, so I suppose that architects would have been the next best person to be developing the form of carriages. It explains alot though…carriages always seem to have a vaguely architectural look, almost as though they are tiny homes and wheels. The lighting and plush interiors remind me of the interiors of houses at the various eras.

Typical…a website that seems to have no obvious interface. Wonderful. Then, you get to the studio shot and it can’t hold any one shot so that you can see what the room looks like, but rather quickly shifts around the room in a disturbing fashion. Nice.

Deez: You should have seen Hadid on CBS Sunday Morning. She made Gordon Ramsey (Hell’s Kitchen fame) look like Big Bird (Sesame Street fame). I don’t know how people like this can maintain a studio that produces anything other than burned out CAD jockeys. Maybe there is something about management I have yet to learn?

I really liked the BMW Plant that she did. It’s cool how the production line flows through the office spaces. The office workers seem really happy with it because they can directly monitor how smoothly production is progressing.

Every second a car spends rolling through the offices is a second it spends not being assembled. Time is money. She might as well have designed the building to look like a big penis, because that’s what it is.

Scott: Maybe the cars pass through the office after painting. That way, there is no assembly time lost. Of course breathing would be made more difficult, but it would just keep the workers on their toes.

I have nothing against Hadid’s architectural work. Some of it quite nice…however, buildings are alot like automobiles in that they are rarely the individual vision of a single person, but the synergy of a team of designers, engineers and others. So, I prefer to say that I like some of her team’s work. Whoever had the idea of the assembly line flowing through the office space had a good idea. I would love to see our products being manufacturered from my office. Very motivational, even if time is money.

Those look like body in white in that pic. I actually think it’s kind of a cool idea too, I was just piling on. A building like that is proof that BMW’s margins are too high though.

pictures of near-identical design circa 1980’s. Such a common style…

Jesus Christ…
Are you really so insecure about your design capabilities? Do you feel menaced by this woman architect? She’s a bad designer because she’s ugly? Are you pretty? Because I can’t really understand…

You realy seem to know a lot about industrial architecture, to be talking about the factory… Just as much as she knows about design? I guess less…

Many people design cars, even if they don’t come from the transportation design branche… Many cars didn’t even had a designer input, and still are amazing (remeber eng. porsche?).

And finaly: until the late 60’s, most designer were architects…
Her design isn’t that much, it’s true… but it can be better that many made by designers I saw…

So, please, all of you people: come back to reality. And stop feeling menaced by her, because she doesn’t care about car styling (note I didn’s say “design”)… more about car architecture, if you know the diference.

Your hostility towards her just reveals a huge weekness: instead, you should try to learn something from the input of a diferent field of design/engineering, as it is always enriching to the design culture.

I have to admit: after looking at the Standard Taxi again, this Hadid car is looking pretty good.

By the way: she has many projects built, and they are very easy to find, if you’re interested.

Zaha Hadid - Wikipedia wiki about her
http://www.contemporaryartscenter.org/ this one is in Ohio
http://www.arcspace.com/architects/hadid/cac/index.htm more of the same

Interestingly, her architecture is very detailed, as oposite to this z-car.
But I guess that if she was someone we liked, we’d say the design has a scandinavian feel, rather than saying it is under-detailed, so it’s not that important…

They have one of the really old HUGE wacom tablets, intuos (one) the white/gray ones. The computers they are on are very 1995 witch is cool cus it is retro, maybe??? And that is the most horrid website ever, and the first image when it is loading scares me.