Almost missed it, the brutal Bimota

Bimota TesiH2 with a supercharged Kawasaki motor and centre hub steering front suspension. Crazy italian styling. For me, this is such a pallet cleanser to other recent vehicles posted. 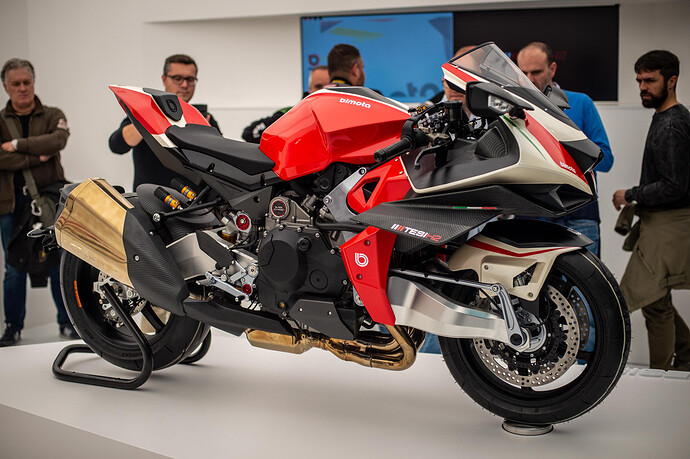 I’m not a super well versed in modern sport bikes though so maybe all those Voltron shapes make sense functionally?

This is just nutty, but different with some reasons. Bikes are maybe the last transport with truly independent thinking versus the color by numbers most cars have.

I was thinking about the Bimota today. The thing I miss about cars today is that they seem to lack purpose. They are all part bin Ikea hacks that styled to try and check some psychological markers in consumers. Case in point, my beloved Porsche has won Le Mans 19 times, including 7 straight in the '80s when I was just a little boy. There was a beautiful interchange between the street cars and race cars. Today, Porsche jumps into racing only when the memories have faded too much for marketing and the street cars really share nothing in common to the racers.

Bikes are different. Every nutty bike gets dragged onto a course. And companies like Bimota remind me of the best of vintage Ferrari and Lotus: Let’s build something nutty to support our race team. I remember when I was a boy finding photos of this one: 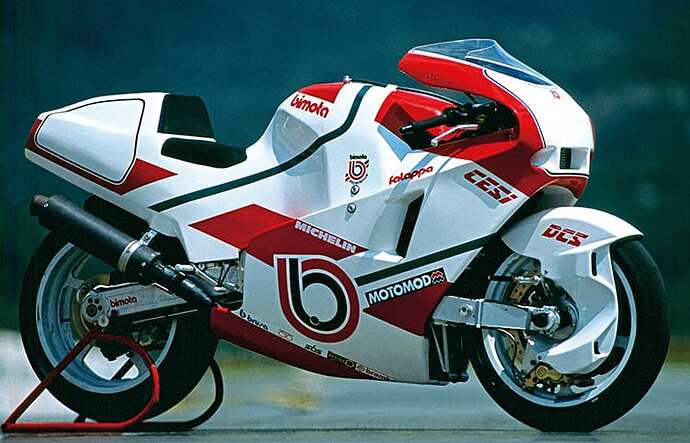 I have no idea if this is by Pinninfarina or some random Italian mechanic, but it’s epic. Similar to the Lotus Esprit in the “seen on the street” thread, this still looks it’s from the future (probably a dystopian Japanese one). To my eyes, the new one follows through. The front suspension has been refined from some aluminum tubing to a fine looking casting (I imagine). There are all kinds of bits of aluminum machining, carbon fiber and I imagine titanium exhaust. The look is bonkers, but it’s just the current design cues being pushed to an extreme. What really stood out for me was the very odd front lamp. I don’t know if it looks good, but it’s creative and fits with the overall design.

The wonderful thing with bikes is how this is everywhere. Similar to Porsche, Honda pulled out of bike racing in 1967, but came back in the 1980s and have never looked back and there is still that exchange of DNA between the circuit and the production. I feel like it makes it all more meaningful. That’s why I’m surprised there isn’t more bikes talked about here. I think it’s the most interesting sector of transport design today, and certainly worth more thought that the Cybertruck.

I do love that how bikes have the direct track to street connection. I loved that about designing basketball shoes for NBA players. They were often very specific specs to individual players and that went to mass production for everyone. Seeing something used in an NBA game and then rocked on the street was amazing.

That vintage Bimota you posted is fantastic looking! Everywhere you look on it there is a great detail and they all connect to make a cohesive whole.

I think Italian design peaked in the 80s. My favorite Ferrari is still the F40 and I find myself appreciating the 348 and Testarossa more every year.

The 348 has really grown on me over the years. I always loved the Testarossa though. It is easy to forget how crazy it was when it came out.

The new tesi looks like the 2009 Tesi3D got fused with the H2 on which it is based- but it’s a bit clunkier than both. I’m a bit more of a fan of the hyper-naked vibes of the Tesi3D but I’m always down for radical bike designs. 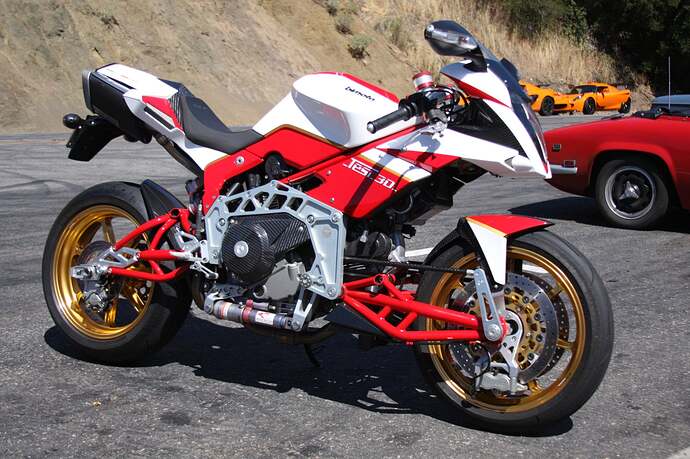 Motorcycles are absolutely firmly planted in racing- and not just motogp- I think pike’s peak along with the “street-fighter” custom scene has had a huge influence on current production hypernaked /streetfighters like the KTM Duke, Yamaha’s MT and Ducati’s v4 Streetfighter (I could do away with the naming your bike after a build style). And Dakar/ rally racing has undoubtedly influenced the design of bikes by the likes of KTM, Honda’s CRF250L (maybe the new Africa twin?) and Yamaha’s XT700 which have hit a resurgence along with the Adventure bike market

it’s a pity though that manufacturers haven’t revived the race-replica offerings of the 80s and 90s bikes- even just for colorways. I would love some radical Pike’s Peak (below) or Dakar livery instead of having the options between black, red and blue (or really just red if it’s a duc).