I watched the live updates on engadget this morning… and it couldn’t have been more of an anticlimax.

the thing is bigger than an iPhone/iPod touch, has less power than a laptop, it can’t call anyone, and has a ridiculous feminine hygiene product name.

there is no camera! forward or rear facing.

no multitasking. (can’t listen to pandora while reading a book, etc)

flash still not supported. (even in Jobs’s demo, ouch)

you need an ADAPTER FOR A USB CABLE!

the keyboard dock… so now its a laptop again? except one that can’t sit on your lap. (and again, an underpowered laptop. just like if you put 4 wheels, a steering wheel, and a motor on a product, people will think it is a car and should drive like one. leave it at 2 wheels, handlebars, and a motor and people will assume it operates like a motorcycle.)


did Apple just screw up? am I not the target market? has the product become so over-hyped that the release of anything at all would have been less than expected? or have they become so hyped / so successful in computing and design that we’ve become such critical critics?

I’ve tried to re-write the following sentence 5 times now, because I hate the statement…but
Its “just” an iphone?

Im with you on this one.

an iPhone that’s bigger, can’t make calls, and doesn’t have a camera.

it does have one or two additional features… but these are just a result of a bigger screen (ebook reader, etc).

The iYawn… ehm… I mean iPad is just what I feared it would be: a platform for selling digital content through itunes store.

so starting from scratch…

Couldn’t agree more. I really can’t believe it doesn’t have multitasking! In many ways it isn’t even as good as some of the new phones out there now. I don’t think it’s a terrible product, just disappointing.

I agree that if you were expecting a new sort of laptop/tablet, this isn’t it. What it really is is an extension of the current itunes/app environment in a larger format which then leads to newer possiblities - notably as an ebook reader, which this is really meant to compete with.

I do think that this will have a great response with the public. It is competitively priced compared to other ebooks readers AND it can do a WHOLE LOT more than what is currently on the market in that segment.

I for one really like it, but obviously would have loved it to be a full-blown tablet… but as it stands I think it has a strong chance to really shake things up.

I think the iPad is disappointing to people because they hyped it up to be something completely life-changing that would revolutionize technology and cure cancer while we’re at it.

I think the product, while it doesn’t hold too many surprises, is a solid design. It really shows the direction that Apple wants to head in the future and is a great starting point for a new tablet platform. It holds great promise for app developers and designers (especially the long-ignored desktop application developer) and for the future of digital print design.

So yeah, disappointing to some who wanted to be blown away, but I see a lot of promise in what the iPad can do in the future.

thing is, its not a cell phone, so no calls in or out.

can’t sketch like you would on a Cintiq/Intuous/Bamboo. no pressure sensitivity. no stylus = you’d be drawing with your fingers.

i know its not a cell, what I mean is that I would down grade my current smartphone to a simple call only version.

The multitasking is a bummer. I was hoping they would develop a new wrapper OS that would allow you to run multiple iPhone apps in it, like widgets almost.

I didn’t catch the no pressure sensitivity part, I just assumed you’d have to be stupid not to include it…

I would’ve considered buying it if I could use it like a Cintiq too. I’ll be sticking with my TabletPC until it can also function as a sketch pad.

So yeah, disappointing to some who wanted to be blown away, but I see a lot of promise in what the iPad can do in the future.

Wow! Has anyone watched the over-enthusiastic video on their website ( iPad - Apple ). Apple seemingly thinks everyone who is going to shell out $499. for the iPad is an idiot. Actors in this video talk exactly as teachers talk to kids in kindergarden. I’m not sure what the marketing team they employed were thinking.

The site stated “our most advanced technology in a magical and revolutionary device”. What? Seriously, Apple? Your too good for this. Try again.

can’t sketch like you would on a Cintiq/Intuous/Bamboo. no pressure sensitivity. no stylus = you’d be drawing with your fingers.

I thought Apple was trying to cultivate their reputation as the creative’s go-to brand.
They have been giving all of their handheld hardware touch screens, I thought they were going to go balls out with the iPad and make their version of the Cintiq.
This is not what I was hoping for, to say the least.

From watching that video, the gestures look so much bigger, which makes them look very awkward. Big movements of the arm. Im not sure that it looks very comfortable. 99% of us are used to the small gestures from the touchpad, which translated very well to the iphone.

Is there any way you can use it in a professional setting, or is it just a couch gadget? 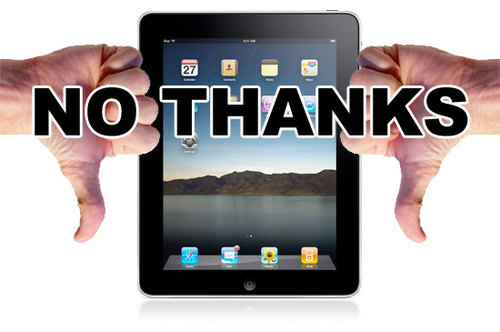 I was disappointed too.

If it had a front facing video camera for video conferencing it would have caught my attention. (Plus: multi-tasking / Flash / stylus for drawing / etc.). Instead it’s just a “tween” product that’s poised to take away share from the Kindle and other e-book readers. I think Apple wants to grab a piece of revenue from that emerging market the same way they did with music. Their new business model includes pimping for musicians and authors. If there’s no downstream dollars to made they aren’t interested.

8 Things That Suck About the iPad

A lot of people at Gizmodo are psyched about the iPad. Not me! My god, am I underwhelmed by it. It has some absolutely backbreaking failures that will make buying one the last thing I would want to do. Updated

I was disappointed too.

If it had a front facing video camera for video conferencing it would have caught my attention. (Plus: multi-tasking / Flash / stylus for drawing / etc.). Instead it’s just a “tween” product that’s poised to take away share from the Kindle and other e-book readers. I think Apple wants to grab a piece of revenue from that emerging market the same way they did with music. Their new business model includes pimping for musicians and authors. If there’s no downstream dollars to made they aren’t interested.

The only problem I see with this equation is:

Im not sure I’ll ever trade in the warm tactile feel of a good book for a cold glowing screen.

I don’t see the point and with a company like Apple why would they do this. It really solves no problem, their consumers have been asking for a tablet computer, and like everyone else has said, it is all around lame. I was really looking forward to having the chance to maybe a tablet Mac. Oh well!!

So I guess the question is when will microsft make that courier concept?
I already accepted the fact that prefer the zune HD.