Hi guys and gals…well now that I have an actual paying job…I’m looking into the market to buy a digital camera…I’ve never owned one, the one I’ve played with the most is the Sony Cyber-shot…but I’ve seen one where the flash broke…I’m pretty sure I’m NOT going down that alley again…but…I’m not known for taking good care of my stuff either…so who’s fault is it?

Anyway that’s not what I’m asking…what I’m really asking is…what digital camera should I buy? My criteria is that the price doesn’t go over $300 …including taxes… that it is definitely a digital brand… and that I AM buying something that’s going to last me a couple of years… not technology-wise, but physically its not going to break on me…

I’m not interested in a Cyber shot thats for sure…but I can go with something similar…maybe even another Sony model…just not a Cyber Sho t. Does anybody already own one that they think is awesome in my price range???

I found this from Fujifilm for 200 hundred bucks…hmmm

I don’t like the fact that there’s nothing covering the lense when its in the off mode…that looks like it could get messy.
I’m gonna keep shoppin but this one looks cool. to give you a better idea!

THis is the goofiest thing i’ve found so far…http://www.goprocamera.com/

I really like the new Panasonic digital cameras. They use Leica lens, and typically have a greater optical zoom. They make me wish I hadn’t bought my HP.

I personally find Sony digicams crap. The design is nice, but the CCD gives pics that in my experience are always blurry and off color.

In my experience, Ive found that Nikon has some of the best cams for quality and also some nice design and good UI too.

Check the Nikon S1 or s5

I personally find Sony digicams crap. The design is nice, but the CCD gives pics that in my experience are always blurry and off color.

I agree, r, Sony D.C.'s Suck Bootay…I was hoping I wasn’t the only one. Nice pick r! I’ll def look into this one.

I think I just might go with a Pentax…there a good camera company…they make good lenses…and the one I’m looking at has an awesome touch screen menu right off of the display…check it out…it’s nice I haven’t seen this before it also has a DRAWING !!! feature you can straight onto your photos using the touch screen and stylus…for 300 hundo it sounds way cool!
Check it…

go to pentax’s website and look for the OptioT10 for the full video that will show you how the display works. Its awesome.

Why don’t you get an EasyShare V803? Stylish design and various colors to choose

They also have some interesting accessories. 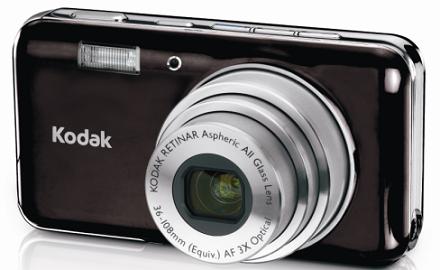 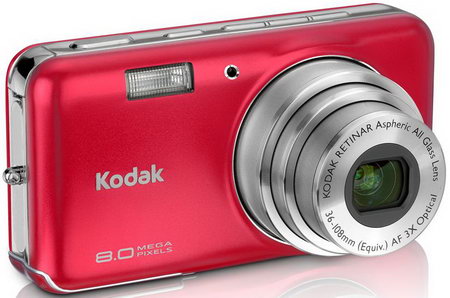 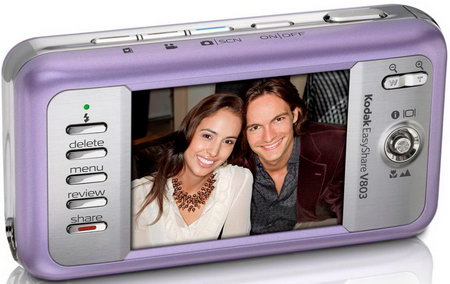 Already on sale on amazon for 200 bucks. I’m going to get a couple for myself.

Oh, and they don’t look like a cold harted cybershot

Already on sale on amazon for 200 bucks. I’m going to get a couple for myself.

Oh, and they don’t look like a cold harted cybershot

Damn for that price and those pixels I don’t think anyone can beat that…I don’t know though, this model looks like its geared towards the gals…those colors sure do match those purses…I would have to get black or blue…I think for the price this is def a great pick…thanks for looking out…but I think the Pentax Optio T10 might still beat this one out…the price is more but the crazy touch screen has a crazy awesome UI …and once I bust out that stylus…peeps will go bonkers…and Pentax is up there with Kodak on the ease of use…so I dunno…

Again…If I find my pockets a little tighter than usual maybe a Kodak…but for now I got my eyes set on the Optio…yeah is aluminum blah…but thats not the selling point…I think the Kodak def beats out on the style.

You know what Cuototo?! I might just get my GF a Kodak for Valentines…they sell a similar model in shimmer red…perfect…I know cheezy but nice…its perfect…!

my only warning is dont get fooled by Mega pixels and specs.

lenses and ccd quality is more important than both.

Still, i get better pics from that (always sharp, no noise, good colors) than a newer Nikon i got last year (dont remember the model number) that has 5.2 Mega pixels and cost $500.

IMHO, Kodak and lot of others that dont make the lenses and CCD’s are junk. Just rebadged OEM stuff. For sure worse than the real camera brands like sony, nikon, pentax, etc.

my only warning is dont get fooled by Mega pixels and specs.

lenses and ccd quality is more important than both.

I think your right, R, I know pentax makes good lenses…so I think I’ll just go down their alley even though Kodak has good eyecandy… This might sound dumb, but I’m all about dumb questions…what is exactly is CCD again??

i have no idea about the technical of eactly why some are better than others, but its what i have been told by some photog pros w.r.t. digicams 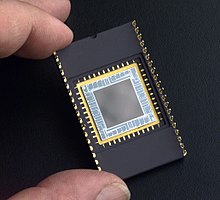 A charge-coupled device (CCD) is an integrated circuit containing an array of linked, or coupled, capacitors. Under the control of an external circuit, each capacitor can transfer its electric charge to a neighboring capacitor. CCD sensors are a major technology used in digital imaging. In a CCD image sensor, pixels are represented by p-doped metal–oxide–semiconductor (MOS) capacitors. These MOS capacitors, the basic building blocks of a CCD, are biased above the threshold for inversion when ima...

Well, I’d say that everyone’s ripping of the original Canon ELPH, circa 1999: 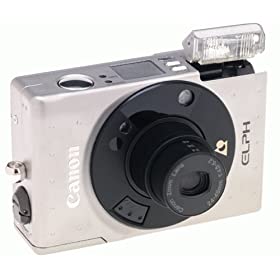 Here are two of Canon’s most recent digicams:

Hey CG, I was wondering that very thing…so Canon ELPH huh? Nice.
See thats good design…when everybody else starts copying you…you’re on to something…Imitation is a natural repetitive evolutionary technique.

I think if we as designers truly want to evolve, we have to take cues from each other when someone is doing it right. Only then can we again truly begin to innovate…once something has been played out…and we’re finally bored with the same old whatever.

I got the Canon Powershot SD80 IS a few months ago and have nothing to complain about other than I wish the LCD was a bit bigger & it bluetoothed to my computer. I think it was right around $300. Takes great pictures… my 4th digital Canon.

It’ll give you guys and idea as to why I’m excited about this sweet little device.

That is a big leap for camera interfaces. The only concern that I would have is the fragility of the screen. A friend of mine bought an NEC touchscreen cel in China last year. The screen broke, in his pocket, after 2 weeks.

Dang…I better buy the warranty then…

Or a hardshell case anyways!

Does the pentax really have a stylus? Neat idea with the screen, but that would drive me up a wall.

I have to agree w/Mr-914…the Panasonic Lumix cameras are really great…I got the DMC-LX1K (8MP) about a year ago and I can’t say one bad thing about it. The combination of the Leica lens and Panasonic’s technology lends to some great images, and the huge LCD to boot! A fairly intuitive interface, too…I actually spend more time shooting in Manual mode than I do any of the other settings.

The LX1K is a little out of the sub-$300 range, but the Lumix series carries the leica lens throughout with downgrades in MP and other ‘peripheral’ features. Amazon has the 6MP version right now for @ $250. Good deal, in my opinion…[/img]

The Great CCD Failure of 2005 doesn't look like it's going to be Nikon's last.