So I know the theory… there’s bad solutions: 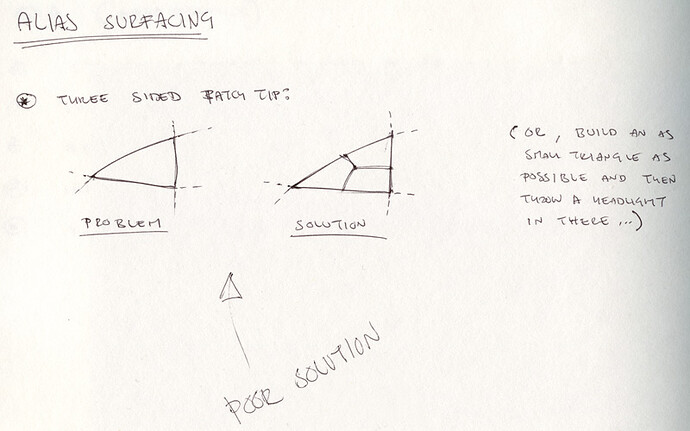 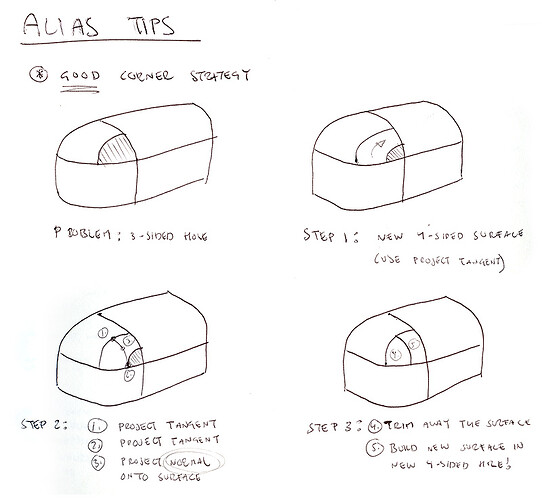 But I still often end up with something like this: 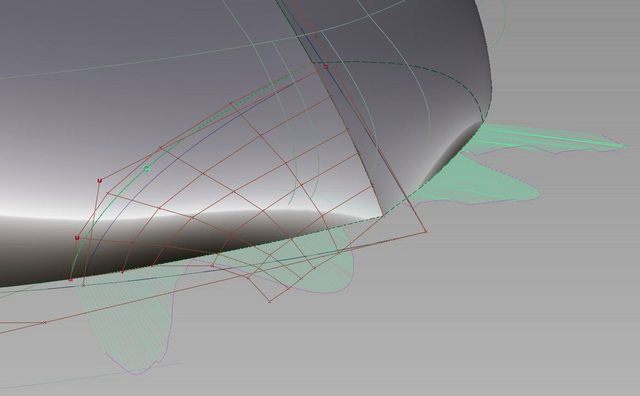 So, when you have curves making out a triangular boundary which you want to use as constraints, while at least one of these boundaries need to be curvature, how do you fix that last gap so the highlight still flows nicely?

I know in my example above that I didn’t follow my own notes, but I’m having a hard time setting up the projected curves (or in 2012, aligned curves) so that the highlights won’t get wobbly.

-Does that have to be a 3 sided individual patch? Usually the corner issue you’re trying to solve is tough because you want G2 across all 3 boundaries, here it looks like you only want G2 on 1 edge? I’m wondering if you can’t build that main surface as one then extend the edge and trim away the excess to avoid the multiknot?

-Try pulling your projected boundary back as far as you can. The more room that surface has to breathe, it is generally easier to make it flow better.

-Try manually sliding the CV’s to get the distribution better if you can - right now there is some jankiness in the CV alignment which will translate to the surface quality.

Ah, yes. You are quite right: 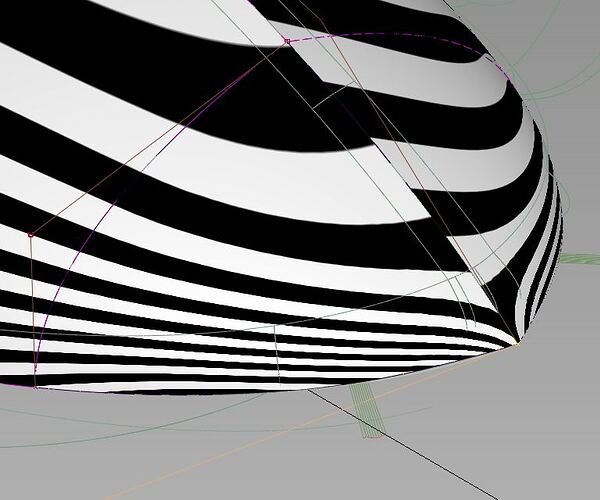 But right now, I have G2 on the patch, and since the triangular surface is extended from that, I know I have position on the middle curve. But the bottom is manually tweaked and trimmed, hence the weird curvature comb.

So what if I wanted position continuity along the selected bottom curve as well?

If you want positional across your trim edge, generate a fit curve to the degree and tolerance you need so it is positional (for a simple clean arc like that it will be very easy) and then build off, or align your other surfaces CV’s to that curve.

Now I’m going to show you that I’m very daft, because I did not understand that.

I still see that as a situation where I can only align one side, and I still need at least two…

Sorry I had to read this 2 time to get what you were asking. You are trying to figure out how to get that bottom naked edge to align with your original curve (that you got rid of to eliminate the knot in the corner).

If you were trying to align the trim edge so it lines up with an existing curve, it would be a bit trickier. I would probably see how close I could get by aligning them by hand. Not sure if the align tool would help you here.

I’d have to play with that a bit to think about how to get exactly that solution.

Trouble is that I’ve been playing with it by hand for so long that my wife is starting to feel neglected and jealous. (ba-da-boom-tssh)