Thank you for your help

What are you trying to map to the projection? The spherical projection should work like any of the others.

Are you trying this in hardware shade or a standard rendering?

What video card/version of studio are you running? This could be an issue with your graphics driver if it’s happening in hardware shade mode. 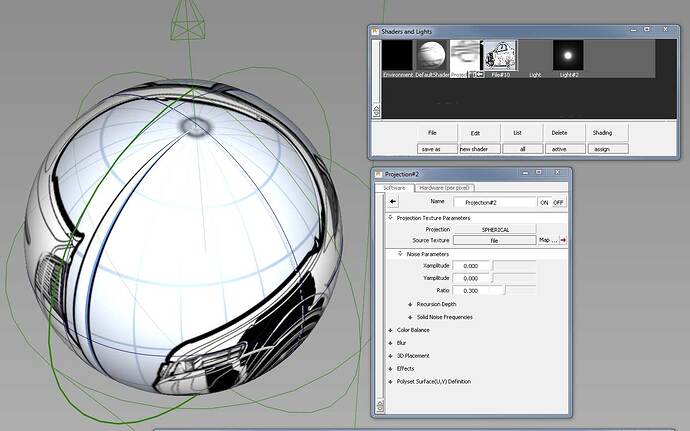 Cyberdemon, thanks for your help, it was very useful!
I managed to solve the issue, my “shade” settings were wrong, I played with them and in the hardware shade settings window I chose “Per pixel” as the shading method and worked out, before I had it “per vertex” . Now the projections shows up perfectly.

However there is still one issue I havent been able to solve, I try to scale the size of the projection, I do the same steps as with a planar projection: I pick the projection sphere box and change its scale but nothing happens, the graphics remain always with the same size. How can you change their size?

Spherical projections will not scale if you do it uniformly.

Imagine visually what a spherical projection is doing. It is taking your texture and projection everything to a single point (the center of your sphere). So even if you scale it smaller the projection rays will still be coming from the same spot.

If you Non-P scale it (squish it) then you will be able to change how it is projecting, because 1 axis will not have the same aspect ratio as the pure sphere.

Thank you very much! you solved my problem!