Sorry about making a new topic, but I’m dying here.

I have a surface that I want to turn into sort of a “mesh” but not the CAD kind of mesh. The mesh like your window screen. I’ve drawn and duplicated a curve that is a square (closed) and arranged it into an array (there are about 1000 of them). I want to project them onto the surface and then trim it away.

HOWEVER. Something’s weird and not all the squares are trimmed away after I project and trim. Even when I projected, a bunch (like 30) of the squares have some kind of weird squiggly curve over them (can’t screenshot because it took forever to project, and I undid it so I don’t want to do it again).

Even when I try to Planar the square curves before I project them, not all of them can Planar (the curves are closed, I swear!). It just says “error creating trim surface”. 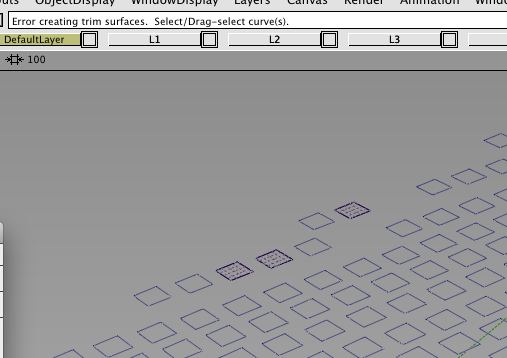 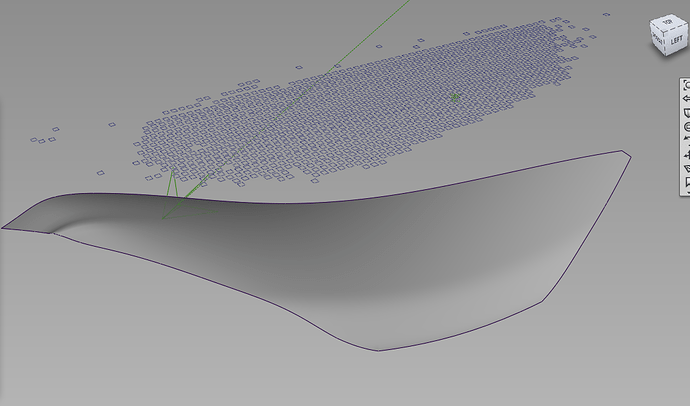 try increasing… no of spans of the surface.
after trimmimg check at render…sometimes it won’t show you at modelling

I’m no Studiotools expert, but that seems like a hard way to show a see through mesh.

There’s a way to make a shader with a masking layer that allows you see though parts of the surface… looks just like a mask in Photoshop. Unless the holes are essential for some particular reason, like making a prototype, it might be the easiest way to get the visual effect of a grid

yea I forgot to mention this is for a 3d printing project ==, so masking is no go :[

I would try rebuilding the squares. It looks like you used a continuous curve which made a mess of the CV’s in the corners. I would try using 4 segments to get the shape you want, then duplicate it to your hearts desire, and then re project and try try trim. 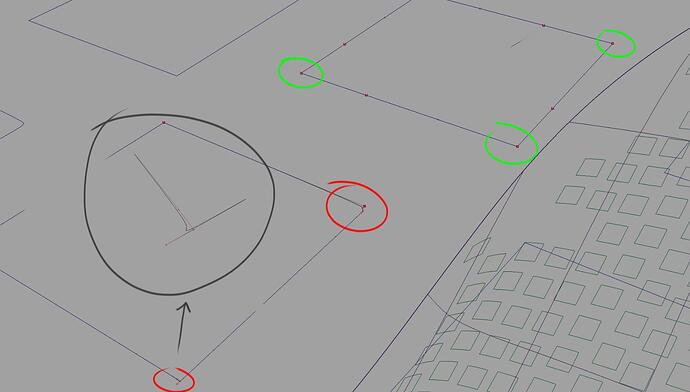 yea i had a problem figuring out how to draw a square… you mean 4 segments like 4 straight lines overlapping, and then trimming/joining?

When you go to project them, instead of clicking on every single curve segment (4 parts per square x 200+ squares), just drag a box over all the squares. Hopefully this will work.

thanks! i’ll try that out ASAP

Brett_nyc is right on. Your curves are messy and just confuse the projection and trimming algorithms.

There is a rule in Alias that will save you time and headaches - modeling clean and simple. The cleanest and the simplest your geometry the less they are charged with complexity in mathematical terms - which means simpler and faster (and more successful) computing.

For a square or rectangle you could also use Curves > Keypoint Curve Toolbox > Rectangle.

You guys were right. It worked like a charm.

OH MY GOD KEYPOINT CURVE TOOLBOX WOULD’VE HELPED SO MUCH. Why is it hidden there? Why isn’t it with the circle/french curve tool? thanks for enlightening me guys

Next time I’m about to explode I’ll come back.

Hahaha, I thought you said you loved Alias in my thread?

This just speaks heaps about the quality of the Alias UI…

i do still like alias. its just frustrating sometime. but i prefer it over solidworks/rhino. i dont know why. i feel more manly using it haha.

i do still like alias. its just frustrating sometime. but i prefer it over solidworks/rhino. i dont know why. i feel more manly using it haha.

the curves that you are trying to use are not that clean. is that the shape that you would like? there is 1 rounded corner, the rest are sharp?
SINGLE CURVE
to build these with a SINGLE CURVE use 1 degree curves and snap the end points together so they are touching and complete the rectangle. i used the Curve Rebuild tool to rebuild them all to 1degree x 4 spans. all though it changes the shape of your curve, it worked just fine.

RECTANGLE TOOL.
yeah i agree that it is strange that we dont have a CV based Rectangle curve in the primitive curve tool set. boooo. since we have 3 different types of curves, we separated the curves based on the workflow and to simplify the interface. we combined all of the keypoint curve tools into a single toolbox, very similar to how the blend curves are.

Keypoint Curves have Dimensions similar to Solid Modeling sketches/drawings. by default, CTRL+5 will bring up the information window and you can key in the size/dimensions in the “attributes” tab.

SHELF FOR NEW USERS
not sure what version you guys are using but we did some re-organizing in Alias Design 2010. unfortunately most students and pirated copies use Alias Automotive. as the name applies it is set up for Automotive that typically have custom set-ups and experienced users.
if you use Alias Design the software opens with the shelf. it organized to keep the number icons to a minimum and group similar tools. the Rectangle tool is exposed by default.

FullShelf.png127×739 37.9 KB
if anyone knows how to post a .ZIP to this forum let me know. other wise here it is for the next week.
DOWNLOAD

to load this file
unzip file, open shelf > right click in open area > “replace shelf” and select the .scm file. just to make sure that it loads its always good to save the shelf set in the default location and name. right click in a empty part of the shelf > Save Shelf and hit save.
rock on.

yea i have automotive. the palette is overwhelming. thanks for the tips!

the palette can certainly be over whelming. funny how i feel the same way when i open Rhino. there is a tool for everything! In Alias, the variation of a single tool is found in the option box. the palette tabs are based on tools with similar actions.

now that i am a seasoned user, i only use the Palette and marking menus. i ONLY use text for the Palette.
Right click on the Tab and you get text menus instead of icons. its faster and easier to know what the tool is.

ANOTHER TOOL TIP FOR TEXT MENUS…
to access the tool last used in the palette, just double Right click on the tab name. for example once you select CV Curves… the next time you need them, just double right click on the word “Curves”. you can do this at anytime even after using a bunch of other tools. basically all of the menus do this. it helps reduce the mouse miles and will save you from diving into the menus and eventually your wrist.

since the menu at the top is all ready text, you only need to double click on the name with the left mouse button.

I learned Alias using text format in the palette. The pictures don’t really make any sense to me either.

Rhino was the same for me in that I had to have every single little set of palettes open before I could find anything, and then half of my screen area was gone.