ALEX PONG Bike Designs - Where is he now?

Does anyone have any good photos or links to some of the Alex Pong bicycles. He either worked for or was under contract for Cannondale. Without a doubt his ideas were somewhat rogue with a little grandure thrown in. Definitely not bland designs. Is he still designing? What industry did he come from? Motorcycles maybe?

Well, his first company was Magic Motorcycle and they started the whole, CNC chainrings and hollow, welded crankarm revolution. I believe it was around 95-96 when Cannondale got involved and started labeling this stuff as CODA.

That was some crazy bike that he showed back in 94-95. Had the suspension integrated inside the swingarm pivots. I was actually wondering about him a few days ago. They said it was going to market, but never came to be. And to this day, I haven’t really seen many of its features in any production models.

Does anyone remember the full-carbon, monocoque road bike that Cannondale made for one year back in the late 90’s? I believe it was named “Slice” but doing a Google image search on “cannondale slice” only produces images of the Slice line of carbon forks. The frame looked like the Burrows Lotus Superbike.

I did a quick Google image search of “alex pong” and it did find a picture of his famous bike, but for some reason the link to the larger picture wasn’t working.

I don’t know if Pong was involved, but Cannondale did a concept track bike with multiple inline skate wheel at the front. IIRC, it couldn’t actually work as the mechanics of balance and steering do not easily adapt to multiple front wheels.

6ix: Are you in the bike industry?

Nope, not in the industry. Just been racing for 12 years and a bike dork ever since! Actually, I did a design project for Giro back in 2002 and interviewed with Trek in 2004. The projects are available at http://www.evansolida.com/design.html

Guess I’m not good enough for those guys! ha ha. I’ve been designing kayaks for the last couple of years though, so at least I’ve been in the sports industry (which is highly underpaid, BTW)

I remember that inline skate concept. The major problem with that is that bicycles are dependent upon rotational forces of the spinning wheels to keep them upright. 2" wheels simply don’t develop enough rotational force to hold a 150lb rider up.

Remember the hubless wheel that Black Hole (Indianapolis) did back in '93? That was weird. I designed the same thing when I was in 9th grade, but I only used three pulleys as opposed to 4. I thought it was cool that a 15-yr old came up with the same concept, but of course I didn’t actually make a prototype or sell it. They pop up on ebay every once in a while. Innovative, but heavy as h*ll.

Remember Spinergy Spox(sp?) wheels? I think a youngish kid developed those in college and sold the rights to spinergy. Turns out they didn’t really work that well after all and they were hideous. Nothing like the RevX that when they exploded sent carbon fiber shards into your shins.

Is this the beast you are referring to?

I can’t remember where I saw the paper, but most of the balance in a front “fork” is inherent in the trail calculation. I think some of the basics are described in that ancient book by Sharpe.

IIRC, the steering angle must touch down in front of the tire contact patch but follow an angled path that takes usually it behind the front axle. The weight of the vehicle helps provide the self-centering force along the steering axis but the any tilt of the vehicle from vertical can be compensated by a proportionate turn of the wheel towards the tilt direction. This is why we can ride a bike with no hands and steer it by leaning. If it were all gyroscopic, then we’d see a turning force exerted by the precession of the wheel about the steering axis.

I knew him on Whidbey island and a very creative man he was. Last I heard (a few years ago) he was living on Hope island. He lives in seclusion best I can tell. If you wanted to locate him you could try going thru his daughters Sally Sunday Pong, or Alexis Pong Eveland who still live close to him. Alex’s son is called Skooks for short and lives in Seattle. 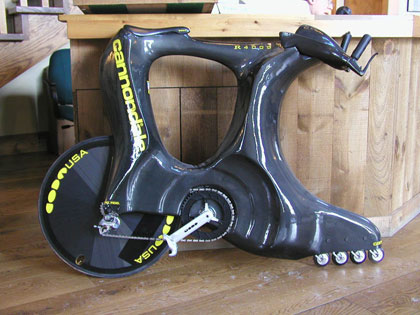 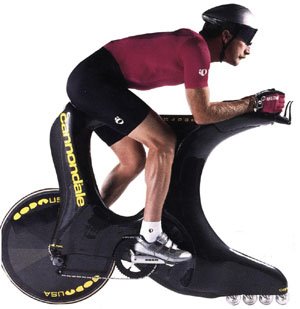 Never heard of Pong, but im curious what else he made. Wouldnt want to ride over some small bumps with this bike though

This is the slice btw: 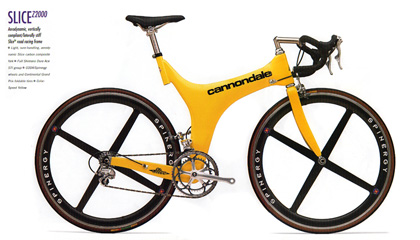