I’ve seen some great concepts (and actual production models) of airline seats, but most of them revolve around making 1st class much much nicer than it already is. This, on the other hand, is at the other end of the spectrum.

What? Seriously? It’s already impossible to get comfortable on a long haul (or even a short hop) flight these days. 23" of leg room? Huh? My femur is 23" long (I’m 6’-5" tall). And somehow this company thinks this will make the airlines more popular? No way. 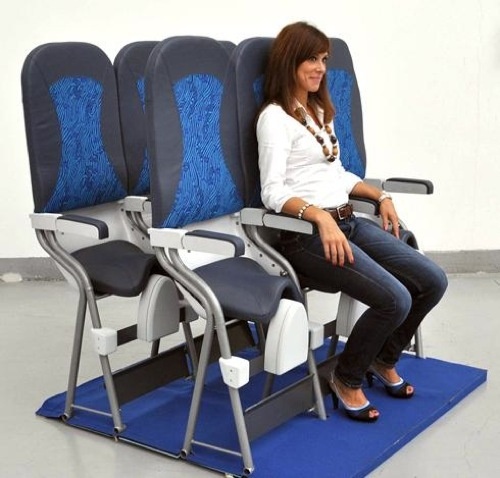 New Airplane Seats Give Only 23 Inches Of Leg Room | TIME.com

New reason to hate flying: Proposed line of saddle-like airplane seats. The “SkyRider,” a new airplane seat design to be unveiled this week sits passengers on a saddle-like seat for the duration of their flight. The new compact seating aims to save...

cant wait to see someone with really short legs dangling from this seat.

a few weeks ago i was flying over seas. I sat next to a woman who was able to curl up in a ball and sleep the whole flight. I have never been so jealous. at 6’1" 215 i can barely fit in the seat let alone try to curl up. with these new seats even that woman would be uncomfortable.

I think what’s most frustrating about this problem is the business side of things. I guarantee if you let a team of designers have at it and not only will they design better seats, but it would also lead to higher customer satisfaction, which you could reason could lead to more sales and brand loyalty.

But I’m sure convincing the suits to spend the money to replace the seats would be like trying to move a mountain.

I think what’s most frustrating about this problem is the business side of things. I guarantee if you let a team of designers have at it and not only will they design better seats, but it would also lead to higher customer satisfaction, which you could reason could lead to more sales and brand loyalty.

But I’m sure convincing the suits to spend the money to replace the seats would be like trying to move a mountain.

I wish this where true but i like most gravitate towards cheaper flights. I know when im searching for flights its the cheapest one that wins out. There are certain airlines i prefer, but if they are much more expensive then no dice.

I think I found their inspiration:

It’s a shame. Those guys got to ride for free at least. We have to pay!

I’ve taken a new take on flights. My gf and I are heading to Spain in a month. I booked first class on the flight there (it wasn’t available on the return flight). Let’s just agree to pay an extra $200 or whatever and only have first class on flights.

next, they’ll use the same seats, but do away with the fuselage for weight savings.

Let’s just agree to pay an extra $200 or whatever and only have first class on flights.

EOS airlines tried this. All business class flights from NYC to JFK. They went out of business. 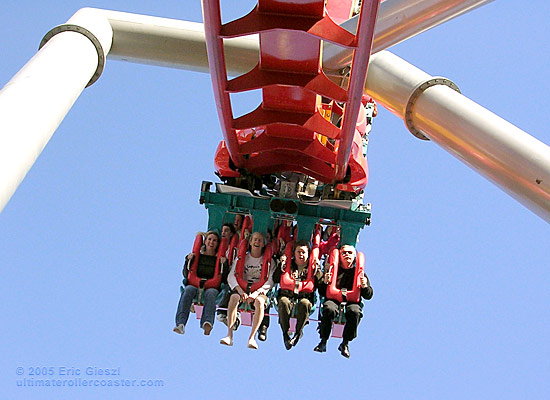 The model in the original photo sort of has a sneaky smile on her face. Maybe there is some “enhancement” that can be done to the saddle surface (ribbing, textures, piezo-electric vibration) that makes the truncated leg room worthwhile…?

Marc Newson designed the Qantas A380 economy seats (as well as most of the interior):

A few years ago I was in Denmark and Maersk (the shipping line) had a budget airline, they advertised the price of seats by how much pitch they had- if you could put up with no leg room you got a cheaper ticket (looking up Maersk Air to confirm, wikipedia has them listed under “Defunct_airlines_of_Denmark”, so it probably wasn’t succesful).

It would appear that they are working toward “minimal is best” concept in steps. The ultimate goal being to train airline consumers to learn to accept a simple frame and the clothes that they wear as the “upholstery”. Interesting concept, but it’s already been done. 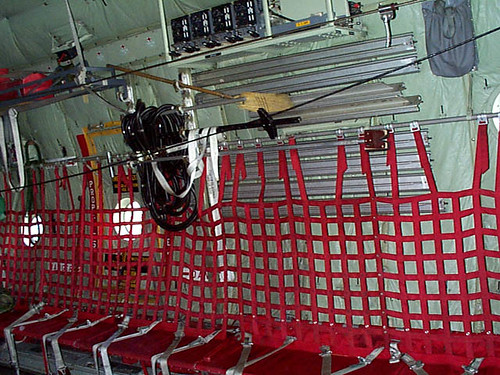 Keep in mind that the second photo shows only half of the passengers; the guys on the left have their backs to the centerline of the aircraft. What can not be seen is the “under seat” storage that pokes up through the webbing.

I can personally attest to the comfort level of this type of seating; I flew with the Purdue University Band in a Venezuelan Air Force C-130 from Miami to Caracas in 1972. If it hadn’t been for the ration of Johnny Walker Black provided by a group of Venezuelan nationals on the flight it would have been pure misery.

You can see the improvements made in the C-17; much more leg room, although the lack overhead storage w0uld seem to leave something to be desired. And how many times have missed a connection because you couldn’t de-plane quick enough? The rear egress would be interesting feature to have on a commercial airliner. 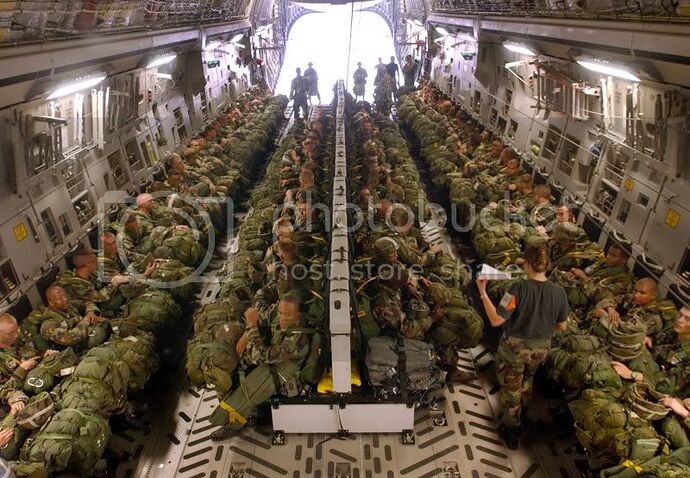 LMO: I’m already irritated by the 350 lbs. guy next to me having to get up once an hour to take a leak. It looks even more complicated in the military. I guess they have more self-control.

Yeah it’s hard to get irritated about getting to sit down in an uncomfortable spot and sleep for a few hours when you know you’re going to be standing in a 110 degree desert with people shooting at you for the next 12 months.

As we begin our descent into LA, squeeze your glutes and feel the burn. 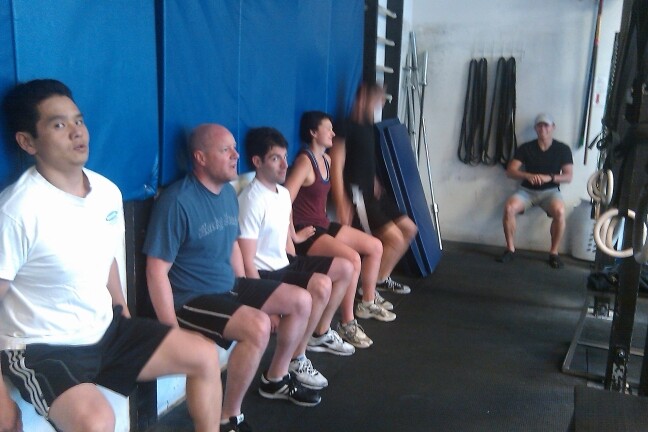