Yesterday I led an affinity-mapping session at work, and created this fun time-lapse with a computer-controlled still camera.
(I’m the big guy in the black.) 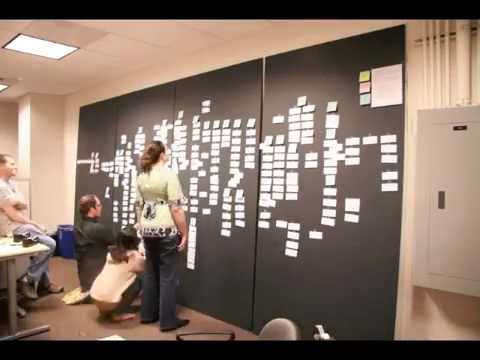 This is a great user-centered technique that yields design ideas and feeds the requirements definition process.

We used Karen Holtzblatt’s technique from Rapid Contextual Design. Over the course of the day we grouped about 500 insights gathered from the Contextual Inquiry of seven research participants.

The process begins with creating cards with the individual insights, coded per user. This is done by inputting the insights into excel during your group interpretation sessions, which happen immediately following your Contextual Inquiry research. You then create a mail-merge in MS Word, using a label-template to fit about ten per page, which are then cut into cards.

As the moderator, you shuffle and evenly distribute the cards. You then put a random item on the board, and ask your helpers to find anything that matches that item in their own decks, begin careful to group by behavior rather than simply keyword-matching.

After the groups start to form, you label the group with a post-it, using the users own first-person voice. There are three different color post-its for three levels of categorization. Blues are described by Pinks are described by Greens. After you’ve got about ten groups on the board (ie. enough branches to hang the leaves), you invite your helpers to start building on their own (in this video, it happens at 0:18 seconds.) No one owns items or groups, so everyone is free to re-arrange as groupings take form. Note that I’m using 4x8’ Gatorform panels, which work really well because they’re waxy enough to that the tape can be repositioned, and they’re lightweight enough that its easy to re-arrange (like we did at 1:07.)

The third part of the process, not shown here, involves “walking the wall” as a team for design ideas.

That was awesome CG. Thanks for documenting it!