Advice on a theoretical Alka-Seltzer refresh?

My personal take is to ditch the half-tone, but I’m digging the rest of it. “Now with more plop-plop fizz-fizz” Classy.

one note to the design above. it came off a bit more kitchy, fun, retro-throwback than originally intended. looks like a new product with a retro theme a bit too much IMHO. an alternate (possibly better) direction would to be to make it look like it’s really from that time. didn’t have enough time to do the research, collect the fonts, etc., and got carried away with the theme a bit…

anyhow, all good for discussions sake.

PS. the dot half-tone was intended to be a sort of bubble like thing. maybe not that fitting with the tone though, agreed.

PS. the dot half-tone was intended to be a sort of bubble like thing. maybe not that fitting with the tone though, agreed.

Now I see it. It would probably work if it were more random than so mechanical.

Wow, I’d like to thank everyone who has contributed to help give us some ideas as we work through this project… Here’s one of the final designs we have settled upon. We found that by implementing strong drastic changes too far away from what customers were familiar with they felt alienated from the product (Think Tropicana refreshhttp://www.nytimes.com/2009/02/23/business/media/23adcol.html?_r=2&partner=rssnyt&emc=rss) We did some focus groups and found that the sharp contrast helped the package stand out on the shelf and the simple clean look was appreciated across the board. We’re approaching the deadline for our project however I’d still love to hear your thoughts…
Thanks everyone!
Ivan 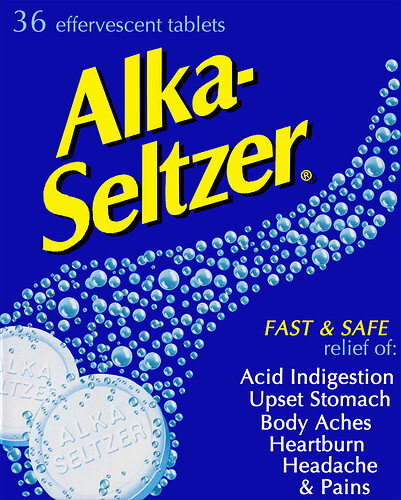 A little piece of advice: don’t get your package design strategy from the NYT. Tropicana’s redesign failed not because it’s consumers were opposed to change, but because the change they offered totally sucked.

PepsiCo and Arnell do it agian!!!!!! branding, packaging, & retail design

I don’t know if you all saw this but there is new Branding for the Tropicana packaging now. It looks Horrible. What the hell is Pepsi thinking. They have destroyed their Flagship branding (meaning Pepsi) along with Mountain Dew, Gatorade, Serria Mist and now Tropicana. I was looking for this in the store the other day and walk right by it. I thought the store was out of stock and bought another brand. Take a look for yourself. The top is the new and the bottom is the old. [6a00d8345250f0…

Wow, I’d like to thank everyone who has contributed to help give us some ideas as we work through this project… Here’s one of the final designs we have settled upon. We found that by implementing strong drastic changes too far away from what customers were familiar with they felt alienated from the product (Think Tropicana refreshhttp://www.nytimes.com/2009/02/23/business/media/23adcol.html?_r=2&partner=rssnyt&emc=rss) We did some focus groups and found that the sharp contrast helped the package stand out on the shelf and the simple clean look was appreciated across the board. We’re approaching the deadline for our project however I’d still love to hear your thoughts…
Thanks everyone!
Ivan

Did you use a designer for that? I hope not. First suggestion would be to get one on board in your team ASAP. Without one, no matter the theory behind it, or good intentions, you will have a disastrous result.

Where do I begin… I’m going to try to be very critical here, knowing that you are not a designer, but trying to show the importance of design. Marketing alone (or when marketing tries to do design) is something that should carry a penalty of death.

To start with, the concept, about being safe, only changing a bit, etc… as I mentioned in my first post on the topic, I think is terrible. What you end up having (and all too common unfortunately when marketing leads), is a change with no real change. Your new package (design crimes aside, which I’ll address below), is just a variation of the existing, and there is no point to change for no reason. Especially when it is worse…

First off, yellow does add impact, but it’s way too high contrast to be pleasing to the eye. Such bright blue and yellow combo makes it look, at best, like washing detergent. Not something you want to eat.

All good design layout is based on a grid. On your design, everything is randomly all over the place. Just look at the placement of the large logo, for one. It’s not centered right to left, but kinda a bit to the left, and the clearspace above it and to the left are not equal nor do they seem to relate to anything.

Fonts are super important. Looks like you are maybe using a default windows font for the text (I’m not going to bother even trying to identify it, but it’s terrible), and the logo font is also not so nice. Doesn’t say anything and looks very generic.

In addition to odd fonts, you’ve got a lot of different type treatments going on. For one, you got all lowercase at the top (effercescent tablets), all upper case, italic (FAST & SAFE), Mixed case (logo and the bullet points). Some maybe bold? And the color of the text is also seemingly random without any hierarchy. Font sizes also look kinda random.

I also don’t know what to even say about the alignment of the text. What’s going on? “relief of” is sorta right aligned, but not really to SAFE, the bullet points in white are on some crazy diagonal… yikes.

The drop shadow on the logo is just gross, really harsh and doesn’t help.

The bubbles are so contained in the “stream” they look unatural, and from far away you see a shape in the stream that with the tablets kinda looks like a wang.

The tablets themselves also look giant. Makes me think I’ll have to swallow horse pills if I buy this.

Fonts are super important. Looks like you are maybe using a default windows font for the text (I’m not going to bother even trying to identify it, but it’s terrible), and the logo font is also not so nice. Doesn’t say anything and looks very generic.

Optima. Welcome to 1991. That’s the only thing I’ll add, RK pretty much summed it up.

Here’s another go, not retro, but clean and minimal. Standing out on the shelf is not always about bright colors and jazzy bursts of text. If everyone else looks the same, look different. 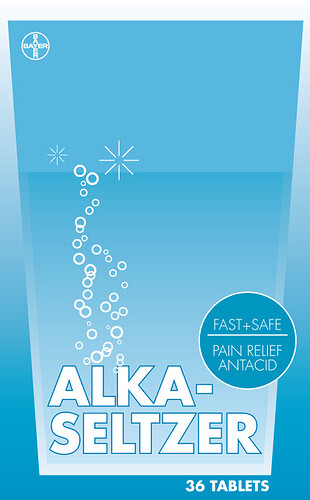 Here is my personal and professional opinion and critique, and its harsh.

Yowch. That refresh isn’t looking too refreshing. Looks like it just had 20-30 years added to its age, in a bad way. Like making a 50 year old woman look 80. Unflattering, a step backwards.

I would expect the design was directly influenced every step of the way through research, marketing, and management.

Drop shadows. Italic text for no real reason (“fast and safe”). Really bad 2d clip-art-looking alka seltzer tablets (which is the very product you’re trying to advertise the value of - you don’t want to make your product itself look like garbage). Ctrl + Copied 2d clip art bubbles, repeated over and over. Safe, boring, forgetful. Some really bad stuff here.

Not to mention the right justified text at the bottom right at what looks like an approx -30 degree angle for no apparent reason. It doesn’t respond to anything, it just does it.

Richard’s last take is pretty nice. I prefer packaging like this (of course)

Richard is spot on. I would just add that it still looks like it is a product made for my grand parents. The greater contrast in text and color might make it stand out, but just in a generic way.

It is hard to judge the packaging alone without knowing what the overall strategy is. However, this packaging says, “we’re staying the course and just tweaking a little”. Was that the plan?

Get rid of the yellow - it has too many negative connotations - jealousy, cowardice, hazardousness - that overpower any attention-getting attributes. Go here for more color direction: http://www.colorworks.clariant.com/

Maybe you should hire Richard.

That’s some tough criticism for you, and I agree with all the feedback, take this for what it’s worth, your boss might, and very likely will not like what you’ve come up with, even though all the market research and numbers point toward your outcome. That being the case your boss may not be able to articulate why they don’t like it, this is why you hire designers or ask for their input.

You could use neon purple and still have brand recognition, the key is to find the balance between different enough for attention while still being relevant and functional. Using blue because everyone else is, or because the market research shows that blue, specifically PMS 301 is the most popular color does not necessarily make it relevant to your product.

Make sure you let us know how this goes over for your team in your MBA class. I’d like to hear the response. Because, honestly, I’m sure your instructor will love it because of the amount of marketing research you’ve done. Of course, that only perpetuates the problem here.

Did someone mention fonts:

Archive of freely downloadable fonts. Browse by alphabetical listing, by style, by author or by popularity.

this is kinda fun. how about a more clinical look to associate with real medicine and avoid the old timey conotations? 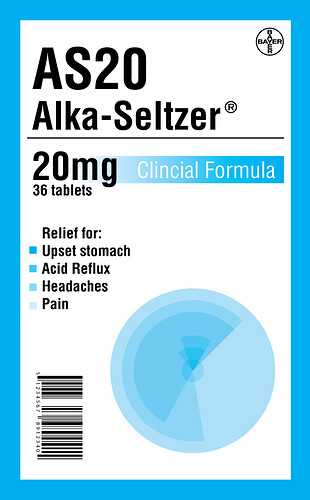 yikes, has this topic been killed? Maybe in need of a little plop plop, fizz, fizz?

Would love to hear back from the OP about the direction they went, more info behind the thought/design… we may have been a bit harsh on the critique, but all constructive criticism.

I’d love to hear back from the OP.

when it comes to critiques, we’ve all developed quite a thick skin as professionals. we’ve all seen kids cry at project critiques in school as it was embarrassing. there is no judgment on the designer/creator of the image or project, just criticism to help give you suggestions to potentially make it more successful, and add a little bit more beauty out there in the world.

No crying, just repeated all-nighters putting together our report. Trust me, we can handle the criticism (and appreciate it).

Yes, we agree that the package we went with isn’t the greatest design; but, consider that a) we’re not anything close to professional designers, b) we’re required to use primary research to base our recommendations, and c) our “recommendation” isn’t necessarily to go with that one design but more to consider use of packaging to differentiate the product on the shelf. If we had gone with, for example, one of your designs (which we really liked) and ignored the results of our survey, focus groups, and class materials, our professors would have fried us for it. Like it or not, we showed your designs (and elements from them) to our focus groups and they preferred the elements we went with – are they perfectly matched/put together? No, but that’s what our primary data indicated and what our photoshop skills were capable of putting together. Actually, what we’re going to do during our final presentation Friday is include some appendix slides with some of our other designs as well as elements from yours to show the process we went through in developing the final package. Once I wake up from the 72-hour bender I’ve got planned once I step off the podium, I’ll be happy to let you know how it went.

Thanks everyone for your input – even though it may look like we didn’t take your advice, I assure you it was a big help. It’s actually been pretty cool to follow this thread and pick up input from a group of strangers. It’s awfully cool of you to help us out. Thanks!