After spending this past weekend immersed in Adobe programs on my Macbook Pro (designing my wedding invitation) I came into work and got working on Inventor 2010. I was amused to find myself repeatedly attempting keyboard shortcuts used in Photoshop/Illustrator. These of course do nothing in Inventor or any other 3D program I know of.

THE POINT: Will Adobe EVER come out with a really great 3D modeling program? Would you want it?

I really think I would love modeling with the Adobe interface we are all so accustomed to. Plus I would be able to stay on OSX.

They’re not going to. They are upping the ante of the 3D features within tools like Photoshop to improve the 2D->3D creative work flow but I don’t think you’re going to see them jump into a game where most of the players have 10-25 years of experience.

Even if they did what would you want it to be? A nurbs modeller? A solid modeller? Some type of hybrid?

Most 3D tools have hotkeys even if they’re seldomly used or have to be set up by the end user. I’ve saved probably 12,00 clicks today in Pro E and Alias by setting up hotkeys for my common tasks for things that are normally 3-4 clicks deep. (Importing and exporting geometry alone is 8 clicks I can now combine into 2 hot keys)

I’d love to see, and have spoken at length about, Solidworks and Adobe getting together to produce a superior modeling, rendering, detailing, presentation package. In a nutshell, I want Illustrator/InDesign page design capabilities inside the Solidworks Drawings module. The recent integration with importing .AI files into SW (you actually have to have AI installed on your machine to do it properly in 2010) is a start, but hardly where I’d like to see it. And most SW resellers agree with me, actually.

That being said, Adobe will fight the Flash/HTML war first, then move on to being destroyed in 3D.

Adobe tends to buy companies to add their functionality to their suite of products (think Macromedia). Maybe they could buy one of the players in 3D modeling and “Adobitize” them.

if adobe starts making 3d prog…i think it would time for a career change…im already battling with mechanical engineers and assist them to be designers…imagine trying to battle with graphic designer as well…we will be running thin. just my 2 cents.

i hope tht never happens…adobe already has a monopoly on G.D programs…

After spending this past weekend immersed in Adobe programs on my Macbook Pro (designing my wedding invitation) I came into work and got working on Inventor 2010. I was amused to find myself repeatedly attempting keyboard shortcuts used in Photoshop/Illustrator. These of course do nothing in Inventor or any other 3D program I know of.

THE POINT: Will Adobe EVER come out with a really great 3D modeling program? Would you want it?

I really think I would love modeling with the Adobe interface we are all so accustomed to. Plus I would be able to stay on OSX.

are y0u making your wedding invitation with 3D softwares, sweeet! you should totally post it! I made mine too and everyone really appreciated it…

I use Acrobat 3d for client presentations pretty often, and I like it a lot. Integrates well with other adobe products too, but costs way too much… you don’t even want to know what the friends&family discount is on Adobe SW - it’s as ridiculously cheap as the full version/adobe products seems ridiculously expensive. I happened to know the guy who invented a big part of the software, a frenchman, and the story went that adobe bought his company and integrated it while they were making the program. I bet they would have to do something similar for a stand alone 3D modeler, and I am SURE they would do a great job with their version

Rumor mill has Apple taking over Adobe. The only way it can happen is to break up the enterprise.

No I’m not designing my wedding invitation with 3D software but now I kinda wish I was so that I could share it. Travisimo, I’d love to see anything you’ve done with Acrobat 3d. I’ve never used it before.

Acrobat 3D is not a modeling program. Its strictly visualization & collaboration, and it’s not anything near as elegant as Illustrator or Photoshop. It used to be a stand alone program. Now it’s a bolt-on to Acrobat, and frankly it’s just not that great. It’s probably the best CAD translator out there. Now the world may need a super terrific translator, but it seems like it could have been so much more. It could have been that unifying bridge between modeling and PLM, the holy grail that brought everything back home.
Instead its a more upscale eDrawings. It’s another booth at solidworks world.
They overreached. It happens when your on top. Time to close the book on this one.

mgnt8 is right, it’s not a modeler… its more like an adobe version of edrawings.

I disagree that it’s not a good product though.

You can easily embed your CAD models built in other programs into PDF layouts, in whichever view you want, clients can rotate scale, slice the model, turn parts on and off, see it in a nice overall layout and have nice printability, all in a PDF universally readable format - it’s fantastic for what I do.

It could be better though, and it’s not a stand alone modeler or really a content producing program, and its not worth the $1k that it costs for the ability to embed 3d models in pdf (thought I think the new CAD programs might export to PDF now). I’m a little hesitant to post work, but I’ll dig something up

I’m not sure what Adobe could bring to a 3D app other than a common UI. Photoshop’s great, but getting anything done in Illustrator seems unnecessarily slow and complex for ID related work.

I’d like to see Xara have a go at a 3d modeller - For the benefit of those who’ve never seen it, Xara Xtreme is a low priced competitor to Illustrator - it lacks some features and compatibility needed for production graphic design work, but for ID - it’s stunningly fast, well written(small), capable and intuitive.
It somehow manages to get it right at every stage of the learning curve - something I’ve not seen with a single 3d app. Solidworks, for example has a great interface for learners, less great when you know exactly what you want to do, Alias feels like an extension of your arm when you know it well, but is a nightmare for learners. 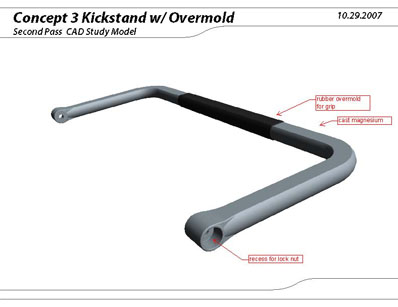 I suppose it’s personal preference or perhaps misplaced expectations. It is nice that you can bundle your model with other files all in the PDF vessel, and the PDF is recognized as somewhat universal. I just think the 3D model is tough to work with once it’s in there, at least compared to other viewers out there. And the 3D editor could be a bit more seamless. It seems really tacked on. Here’s what I use: 3D-Tool CAD Viewer and 3D NativeCAD Converter
Nice viewer, easy to move the model around, great measurement tools. It exports an exe file with an embedded viewer, so no program is needed to open it.
Again, I just expected more from Adobe. It just seems like they’ve been flailing around trying to fit this square peg into their overall strategy. I’m not saying I’ve got all the answers, but if it were me, I’d pawn it off to Autodesk and concentrate on my core graphic design programs.

wow, i had no idea that 3d PDFs existed. That is so cool!

I just think the 3D model is tough to work with once it’s in there, at least compared to other viewers out there. And the 3D editor could be a bit more seamless. It seems really tacked on.

I completely agree with you there. It’ s not perfect and that 3d viewer tool bar is very clunky. I hate it how that ruins the whole page when it pops up, it’s so big! they really dropped the ball on that part of it…

There is a pretty cool plugin for Illustrator called Esko Studio, With it you build packages and then map your artwork on the model. It’s not realtime updated, you have to push a refresh button, but then it’s instant and you can rotate your design in realtime. Esko can also export to u3D if i remember the name correct, that format can be imported directly to Acrobat so you can get those sweet packages in your presentations, rotatable! Makes you drool until you see the price tag. 3500 euro.
I was hoping CS5 would have improved 3D capabilites like this, but I don’t think it has.