Hey guys…spent the later half of my Saturday working on this concept. I’m exploring a solution to the midfoot/arch lockdown problem that many sprinters have…which they usually solve by tightly wrapping large amounts of tape around their spikes in this area. This concept utilizes three velcro straps that are integrated into this midfoot area for superior lockdown. The straps weave through the zip-up shroud and are pulled through individual loop inserts located on the medial side of the shoe, and are pulled back over to the top of the spike.

Trying to work in some details as well…the thumb grips on the straps, as well as the jamaican flags located on the underside.

More refinements and details to come. 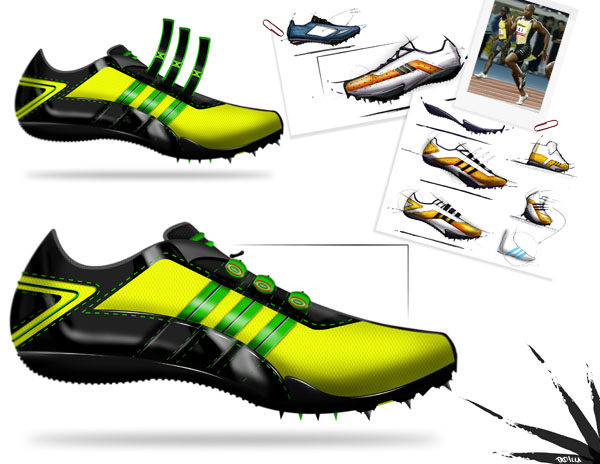 Nice project. I think the mesh area is a bit more successfully rendered than the glossy area, but that is minor. Looking forward to seeing how the design of the bottom integrates in. Would also like to see a top view. Remember to explore these products 360 degrees before getting to far with a single view. The entire product should be designed at the same time.

thanks for the feedback Yo…I’ll be refining and working on those views today and post them later tonight.

Bit of a busy day…did some spike plate exploration. Taking the detail of the thumb grips on the straps, I explored that circular pattern in the heel area and how it could elegantly transition up through the plate; also trying to incorporate the 3 stripes for adidas. 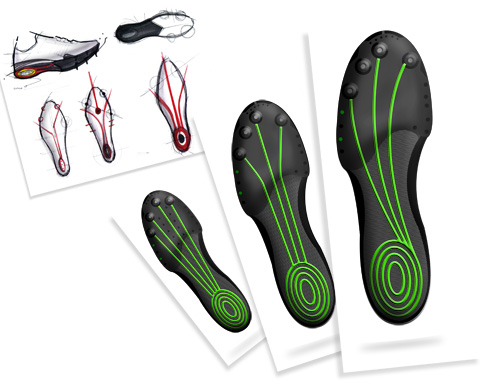 Interesting. I had my arches taped every day throughout my University career. I have particularly high arches and without it, they would get quite painful. A shoe that gave me a way to alleviate the pain of the blisters every August after a summer’s rest from the taping would have been nice.

I would be very interested as to whether you could pull this off with 3 velcro straps. I remember…quite vividly even though it was 12 years ago, that I could only have a couple of the trainers tape my feet properly because a nice even distribution of pressure was key. If they rushed through it and were off by even a little bit, it made matters worse.

I realize that I am a survey of one…but I know for a fact that sprinters are very particular when it comes to their feet. My gut tells me that a custom insert in conjunction with your straps might be needed.

I can’t wait to see more.

Hey guys - some refinement and developments on the spike plate concept:

-Took the green curves and ran them through the base of the each spikewell that they flow into, in order to create a smoother transition.

-Also explored incorporating the unique Jamaican culture into the design details…getting inspiration from their embracing of the ganja plant, which they refer to as “the herb of life.” The forefoot inlays make a subtle reference to this symbolic plant while adding to the overall “aggressiveness” of the plate…not sure how that would go over with marketing though

IP: cool to hear your first hand experiences with this problem, thanks for the insight. 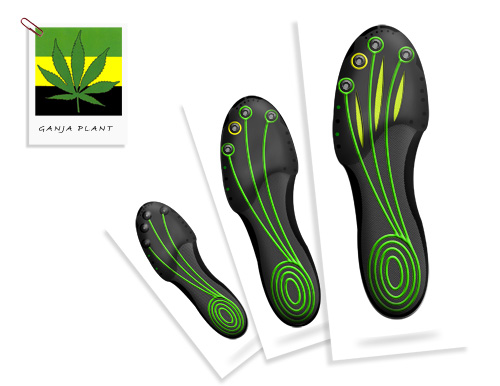 I was just looking at the spike plate and I don’t think you have a good enough pattern for the spikes. As I recall You can have 6 spikes on the bottom and there is usually a 7 opening where a blank stud is placed.

Pressure point dispersion is one reason…poor fitting spikes with a spike in the wrong place HURTS! You can then orient the spikes how you like best also.

Even though all sprinters are up on the ball of their feet, having spikes solely on the toes like you have won’t do well in the turns (especially indoors). I definitely remember running virtually on the outside of my right foot on an indoor track turn (200 meters vs 400 meters indoors). But more than anything, a sprinter uses the whole ball of their foot not just the toe.

Good point IP!..thanks for bringing that to my attention. Being a distance runner, I definitely overlooked that key aspect. I’m used to the minimal distance spikes with the small permanent spikes. I’ll refine that spike arrangment and get it up here tonight.

I took a look at various sprint spikes and refined the placement of my spikes to better fit their use for the sprinting events. Once I complete the other views (top, etc.) I am going to take this project a step further and look at what I can do with the accessories like the spike carrying bag, spike wrench, etc., so I can come out with a pretty comprehensive project here. 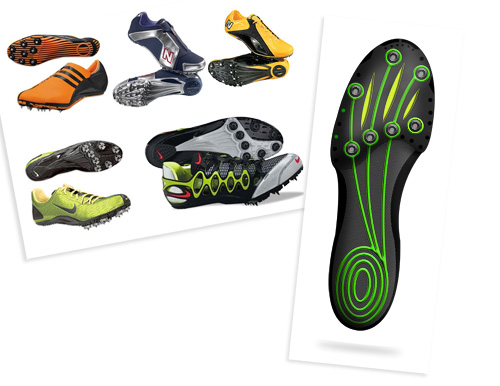 nice project, I would still look a little more at the stud config. Having 4 studs across the 5 met heads of the foot and bang on the point of flex throws concerns:

If i would you I would show these sketches to a sprinter and get their opinion. Typically sprinters are very precise in their knowledge of their functional needs

That four in a row along the bottom scares the bejeezus out of the center of the ball of my foot. Think even pressure distribution on the bottom of the foot.

Most sprinters use a shoe for a season (until they get good enoug for sponsorship). That means that close to the end of the season these things have been beaten to hell. The majority of support is needed in the ball of the foot. With essentially a big circle around the outside of the spike plate like you have…that center point is going to sag after a few weeks. Eventually causing problems. Sprint shoes are a fine balance of weighing nothing and being able to take a huge amount of pounding.

Thanks for the input guys. A lot of the guys here at Tech prefer the arrangement seen on the Zoom Powercats and Superflys, which aren’t too different from what I have in my latest spike plate. Looking at the center however does make me want to close that gap a bit, perhaps by adding one more spike well to make it a total of 8 instead of just 7. It is definitely a challenging project because each sprinter has such a unique perspective on their equipment and their performances. 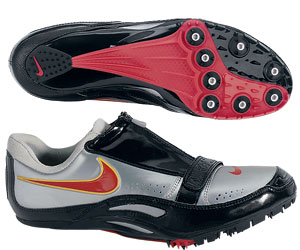 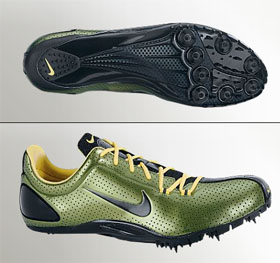 I was a sprinter/jumper in college and I think you are on the right track with the four spikes across at the ball of the foot. I believe this configuration has become desirable because this is where most of your power is generated. It also seems to keep you in the correct running position. The area I am concerned with are the spikes at the front. I think the reason the others you have shown sport two parallel spikes there is because they are located under the big toe and the second toe. That is your final contact with the ground on the push off. It would really be hard to tell if your configuration worked with a “test run”.

Another fact is that, as has been stated, each sprinter has his/her own spike that they love. I remember I had a pair I used for a couple seasons, well beyond their intended use. You kind of find them and do not want to change. Sprinters can be fairly picky(unique perspective), so trying new things can be a good route for those who have yet to find one they love.

Good work! I am always happy to see projects outside of the basketball range.

Thanks for the input guys. A lot of the guys here at Tech prefer the arrangement seen on the Zoom Powercats and Superflys, which aren’t too different from what I have in my latest spike plate. Looking at the center however does make me want to close that gap a bit, perhaps by adding one more spike well to make it a total of 8 instead of just 7. It is definitely a challenging project because each sprinter has such a unique perspective on their equipment and their performances.

What you should note in the images of those spikes is that they have a support system of plastic “spikes” in the center that give support there.

Like ScriptD said, the four across probably does make sense from a power standpoint…well…in the 60 (indoors), 100M and 110H particularly. I don’t know if spikes out there examine the difference in power dispersion when running turns. Running a 200M indoors was interesting as you really had to lean in the turns. This tends to roll your foot (especially your right foot) over onto the outside of the foot.

I had a particularly long stride (as opposed to a shorter stride with more turnover) and remember feeling as though I was going to lose footing in the turns quite often.

Yea IP, I was looking at how those plastic spikes are arranged…I have a couple old track spikes here at my desk and was looking at how they wear down in those areas. I’ve been thinking about what you said about your stride and I know how weird that can feel, especially on those banked indoor tracks. I’ve jumped in a couple 4x400 relays and my stride definitely has to change to accomodate those turns at that speed.

I remember those 200 curves so well. I’ve run out of my shoes before during practice on them because you lean in so much and put so much pressure on that right leg. I’m surprise that I’ve never seen shoes designed specifically for those corner conditions because the forces are much different than on the straightaway. Ones where the left and right shoe aren’t mirror images of each other. Possible a corner shoe that’s ramped higher on the right side of the shoe (left and right shoe) so that if you’re a corner runner you’re pushing more against a flat surface instead of the angled track (in relation to your foot).
I used to do hurdles, short relays, long jump, triple jump, and high jump (6’10" when I was only 5’8 in high school). I would’ve loved one shoe that could somehow work for all of those events (probably a completely unrealistic wish) but it really sucks either having to hurry up and change shoes and re-lace to run from the track to the pits (since they do those events at the same time) or just pick one shoe and then do hurdles and kick sand in my face because I just came from the long jump pit with no time to change, wow those were the days! Sorry for the ramble, it’s past my bedtime. Ramped corner shoes, hmmm! I think I see something there.

been really busy here at school…had some time to add some more details to the plate: 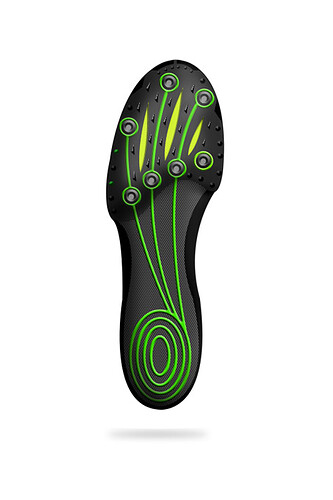 this plate is used on quite afew of nikes spikes and it’s always been regarded as one of the best, however a lot of people have always said the front 3 spikes (quite like the ones on the concept) should be slightly further back as most sprinters feel they don’t dig in enough. also on the heel sometimes (it very rarely happens) it can touch the ground, more often in hurdles, it’s nice to know you’ve got a bit of grip this plate has a sharkskin heel and it’s like very rough sand paper http://www.eastbay.com/images/products/large_w/15165161_w.jpg

brilliant design though,(you might be interested to know asafa is sponsored by nike, bolt by puma, so they wouldn’t be able to wear it BUT tyson gay is, could you try a usa colour sheme, with a couple of my suggestion’s ???[/img]