Hi all, I’m a student studying product design at university in the UK and am a long time reader of these forums, but this is my first post! I was just looking for some critical feedback on this preliminary design for a rugby boot I am designing for one of my projects at the moment.

The idea of the boot is based around the current trend in rugby players to wear football boots (particularly the backs), sacrificing important heel/ankle support. I was also looking to tackle the problem of fixation at the shoe surface interface (which is often a contributor to anterior cruciate ligament injuries in no contact situations). The current idea revolves around studs that retract into a deformation layer which deforms under natural forces (relates to total ground reaction force) when the player is running in hard or soft ground conditions.

When the studs retract into the layer (in hard ground conditions) the surface area at the shoe surface interface is increased while also decreasing the impact of the studs on the plantar region of the foot (a problem found in my research.)

I was also wondering if anyone had any ideas on how to model a prototype of it (I have though about making a mould of the sole plate in clay and casting it, whilst actually stitching the upper) - I can perhaps get a last from the fashion department at our uni.

As it stands the design is by no means finalised but any critical feedback on the design itself or the aesthetics is greatly appreciated! I have some more stuff on boards basically where the design and some of the ideas came from.

Thanks for your time, Johnny 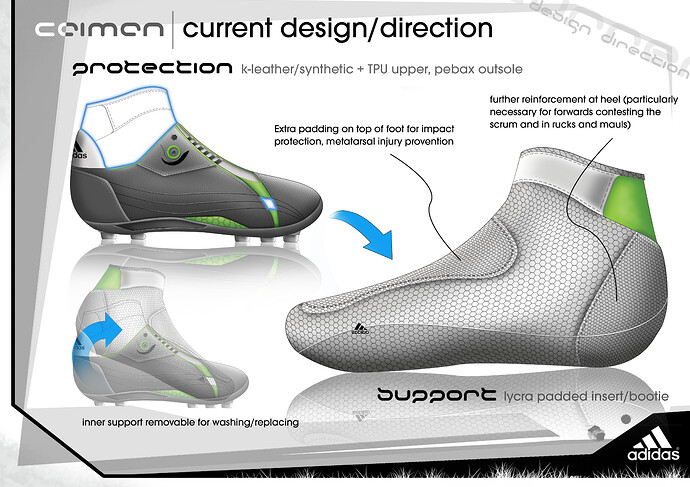 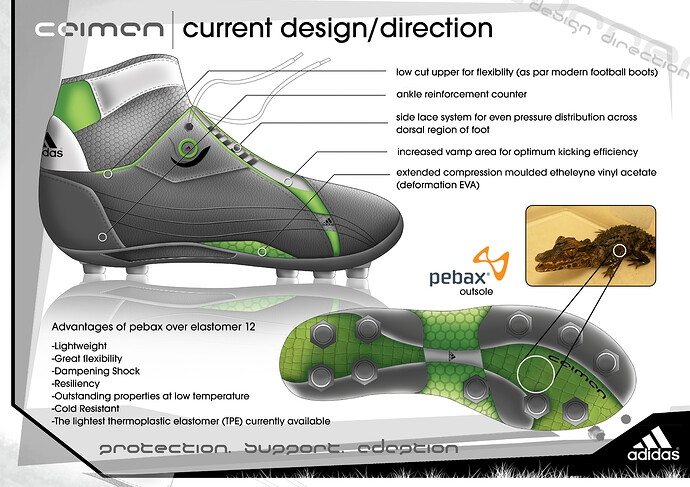 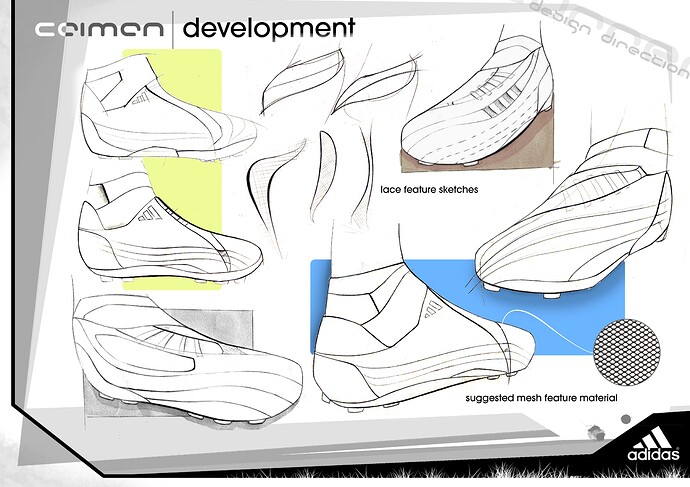 As for a model you could try wrapping masking tape around an existing rugby shoe and then draw you design over the top of it. If you check out the latest Sole Collector with Melo on the front you’ll see an example of this done for the M4 by D’Wayne Edwards (If you go N’bria, find me, I’ll show you). Theres some examples on this forum somewhere too, but cant remember where abouts…

Hi there, earlier in the project i created a mock from blue foam then taped up some designs over the top, I find it a very useful and affective method. I actually go to Coventry university, can’t say I’m a footwear expect as my course is based around all industrial product design. Thanks for the info though!

edit: I forgot to mention I needed a kind of prototype which is a ‘finish model’ for display purposes, I wasn’t referring to this concept in particular, but the one I eventually come up with.

Oh right, no problem, N’bria first years are doing a footwear project so I just thought maybe… I’m sure someone on here knows what you need to know, try searching the forum, think it may have come up before.

try to see if anyone at your Uni can do 3D modeling, ask them to turn your design into an STL files or a file capable for rapid manufacture. Then get your outsole rapid prototyped, your Uni should have a machine. It should cost you around Â£50.00.

You may have to pay for the modeling.

If you have a last you can get this scanned at a company called Shoe Master in Somerset. This will help the guy/girl making the model.

Just some added user feedback as this was something i was planning on doing myself as i am a very keeen rugby player and have been playing for 12 years.

I myself am a winger and so need a shoe that gives me enough grip to get enough traction to start running, but does not take half the pitch with me.

Rugby is played mainly in the winter months and most grass roots players play on some pretty awful pitches. Now there is not much one can do about a water logged pitch but i do beleive a boot plays a key part in my speed as my track speed is alot quicker than on grass.

Also ankle injurys are prominant as i myself have a very dodgy ankle but last thing i want is an ankle encompassing boot. I would maybe look at making the shoe fit more like a sock rather than a boot.

Would the deformation take away from my running speed? is probaly what jumped out at me straight away as tbh it is very rare to play on hard ground unless playing rugby sevens or abroad in the southern hemisphere.

Aesthetics side me personally i am fan of black canterbury style especially if this is being designed with backs in mind i want it to look mean and sleek. Not floorescent yellow or green like Vincert Clerc wears for france as that is something associated with football imo.

Im glad to see though that this is being tackled as this is a definate gap in the market seeing as the majority of players dont want the ankle support most rugby boots offer and im not a fan of football boots.

Hi there sketchme, the boot is meant to work on two levels, the boot itself does not encompass the ankle but a ‘bootie’ which is made from a more flexible material (lycra is suggested in the presentation) - like as you said, more like a sock, whilst the outer of the boot is traditional leather/k-leather upper which provides the main support/protection (hence the slogan i came up with:protect (the traditional upper) support (the bootie) and adapt (the stud traction system.

I’m glad that you agree with the gap in the market and also the styling - however my lecturers seem to disagree! They said that they liked the detailing etc. but were not a fan of the ‘battleship grey’ as they called it, saying that its been done before and that more extravagant designs are starting to be worn by rugby players (pointing to the Michalak Flowery le coq sportif boot and as you said the vapor 2’s worn by vincent clerc).

The deformation layer works on the principle of total ground reaction force (the layer has a set density and therefore reacts/deforms/springs according to the surface and therefore should speed a player up by increasing traction at the shoe surface interface more than anything else).

I happen to disagree with you on the hard pitch issue… having played rugby through the years I have often played on harder pitches and found the studs coming through the boot (particularly pre-season when precipitation is generally harder to come by). Either way its interesting to hear different opinions…

Thanks for your feedback! Johnny

it might be worth having a look at Go Lite footwear - www.golite.com/footwear They have a grip system when the studs compress around obstacles for grip. Different application but may give some ideas?

can you explain a bit more about the stud system you mention. i think i understand what you are trying to do, but it doesnt really make sense to me from a functional or construction point of view.

if the studs pop into a midsole, you’d get less traction, not more, plus instability and the need for a thick layer between the stud plate and the foot…

the idea sorta sounds like these shoes http://newtonrunning.com/ but they are designed for a forefoot strike benefit than grip.

Hi there, sorry for the late reply, have been fairly busy with course work. Basically the studs pop into a midsole in hard ground conditions (i.e the studs would not be penetrating the soil), thus increasing the surface area in contact with the ground at the shoe surface interface (this is particularly important in pre season when pitches are generally a lot harder). An extreme example of this is say a player ran across concrete in the shoes the studs would retract allowing the bottom surface to contact the concrete giving more grip - just to illustrate my point.

This would also mean that the studs would not cause an extreme reaction force on the players foot, giving it some suspension, and reducing the risk of a players getting impact damage on the plantar region of the foot (this is currently a big problem, highlighted in my research).

I’ve included another JPEG which may shed some light? 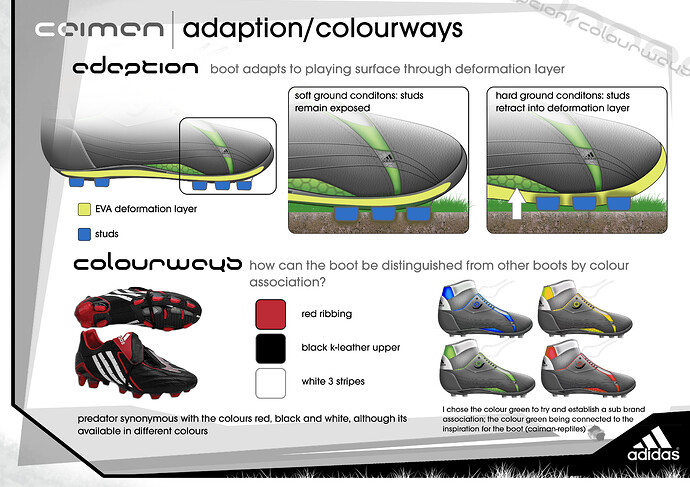 Im still slightly unsure as to whether or not this would benefit the grip , if the studs retracted back into the shoe surely they would need to go in fully to increase S\A? Also if u did that then would the sole not need to be grippy like a trainer? cause most boot soles are made from hard plastic arent they and i imagine that is very very slippy?

I still cant get over the notion that i would some how be loosing speed by this technology to me with the retracting studs energy is being lost, maybe im just being very silly and missing something here.

Dont get me wrong though your still hitting a great market just not sure about the retracting stud option.

ok, i think i get the premise now, but i likewise have doubts if the retractable stud thing could work or even be beneficial. on typical boots, there are more studs if it is for firm ground (FG) vs. less studs for soft ground (SG), given that less studs create more pressure on each one for better grip on soft surfaces. if im following your description correctly, your solution would do the opposite, with the studs retracting into the boot on hard pitches which would give less, not more traction.

aside from the premise, mechanically i think you have issues as well. most FG studs are 11-18mm (forefoot vs. heel studs) on average, so you would need a pretty thick midsole to accomodate this thickness (even thicker than a running shoe, for example) to fully retract. a midsole of this thickness would move the foot much higher above the ground, making it more unstable and also absorb a lot of the energy that goes into running. i dont think this is a good idea.

all technical aspects aside, i would suggest to try to find another solution, or go back to the drawing board to find another option instead of the retractable studs. i realize its only a school project, but the reality of it would be pretty obvious to anyone looking at your portfolio so is worth revising to make the project portfolio worthy.