1.) Yes you can use Weld-on, but you will definitely have some air bubbles. Unless you used a roller laminator and some optically clear adhesive sheet (not sure on a brand here). If you’re going to paint it, it won’t matter.

2.) Many places print onto acrylic and not just Europe. Almost anyone that has a flatbed digital printer can print “direct to substrate” Here’s 2 places I’ve used in the Minneapolis area: http://www.prismstudios.com and http://www.expressimage.com

Check to make sure a vendor in your area can print white, that’s the crucial step in getting optimal color saturation. Unless of course you’re going for some kind of ethereal translucent print…

Also, call Piper Plastics, they will give you the best price on acylic if you are in the greater Chicagoland area.

thanks for the responses guys.

do you know if the method used to print on acrylic sheets will allow for heat bending afterwards? i hate to mess up a perfectly good piece of acrylic after paying for printing.

It will completely mess it up, if you’re heat bend is across the print. There’s really no way get around that.

What’s another good way to get a digital print (full color) onto acrylic sheets to be later bent into shape?

I called a bunch of sign makers in my area and they all said they could NOT print directly onto acrylic… rather they could only print onto vinyl pressure-sensitive adhesive sheets.

**Also with respect to weld-on and laminating two sheets… can you heat bend the cured piece?

I have used a place called Dedicated Graphics outside of Chicago if that is more convenient than NURB’s places in Minneapolis.

And although I have never bent laminated acrylic, I can’t imagine that working well. I could see any air bubbles in the solvent getting worse as the plastic is bent. Maybe I’ll try it in the lab tomorrow for funsies.

i didn’t think it would hold up… so there goes that idea… now i see why 1/2" or 1" cast acrylic is SO expensive.

thanks for the name of the gfx shop. do you happen to have a link or a phone number? sorry i wasn’t able to google it.

although i am 2.5 hrs from chicago, it is somewhat closer than mnpls to me.

Maybe you should talk to 3Form about what you are doing. They might have imaging capabilities as well as laminating, and bending.

Dedicated Graphics: It's Not Just A Name. A creative idea is only as good as its execution. That's where Dedicated Graphics makes a difference. We help businesses and creative teams produce their ideas to perfection without stress or hassle.

Please disregard the cheesy music on the site. Ask for Paul, he is a good guy to work with.

I won’t have a chance to try bending laminated plexi in the lab today. Maybe tomorrow.

iab: i’m looking forward to hearing the results from your experiment. is it true that you have to heat up both sides of the sheet the thicker it is? with a standard plastic heater, how would you go about doing this without warping it as you flipped it over?

okay thanks Nurb… i’m going to google it now.

with a standard plastic heater, how would you go about doing this without warping it as you flipped it over?

Use two heaters; one on either side.

It is not as pronounced on thin thermoplastic material (up to about 3/32"), but it is there. It becomes very pronounced on thicker materials; > 1/8". The larger the radius, the less the stretch (less, not eliminated).

This occurs in sheet metal as well, but is not as pronounced because the metal is less fluid than “plastic”. 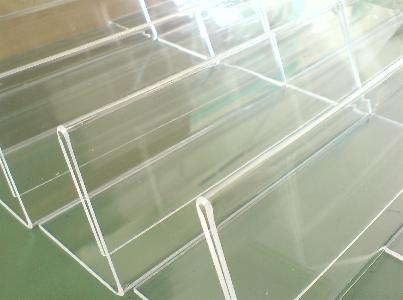 You’ll also get these droopy corners… 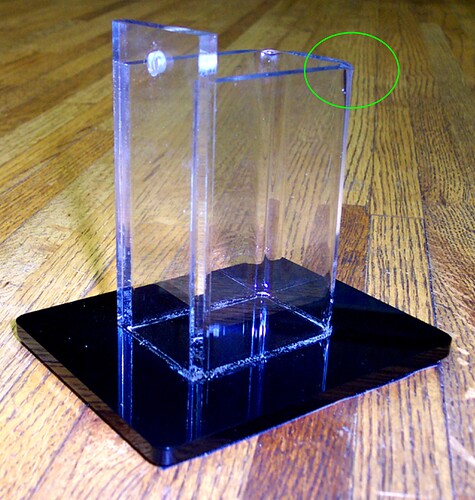 LMO, Nurb, thanks for the very valuable info.

iab, have you had time to experiment bending the laminated sheets?

Talk to this guy… genius acrylic fabricator. I’m sure you could pick his brain about a few things, if you ask nicely. And if you decide you can’t do it, he probably can.

good call – thanks for the link Nurb.

Sorry about the delay midwestsky, I am in the middle of some clinical trials and things got a little wierd. I should have time tomorrow.