For my design studio I am redesigning a fire extinguisher. I did this board for my mid crit and thought it was fun.

is this the final design (midcrit?)? wondering what prevents accident use. most have a chained pin. one-hand carry?

This project is still in progress this board was done for a presentation midway through the process. It is one hand use and a pin will be added. I was just trying to work out the overall form of the object. I still have to design a label, work out some details, and make either a physical or compute model.

I love this–it has a lot of personality. I’d love to see the sketches leading up to it–

I like the idea of making a more stylish extinguisher that you could keep out in your kitchen. It would function much better out by the stive vs. under the sink. A few seconds can make a big dif in a grease fire.

A few things to think about going forward:

Can it look more architectural to blend with the environment?

Can the compressed bottle form respond more to the holder’s form?

Can the nozzle integrate more into the form and simplify? right now looks a bit piecy and delicate vs simple and easy to hold/use.

another couple thoughts. iirc most extinguishers kept on ground during use. weight is issue. also static electricity (i think). if on the ground, nozzle angle should be at least level imo. worth double-checking if you havent researched that.

I was thinking about when fire ext. are used. It seems like mine would be hard to aim under stress. What about rethinking the general form? Maybe change the tank from vertical to horizontal so you could just point the whole unit at the fire like a hose.
Just a thought…

In most emergency situations, overstyling becomes a hinderance to efficient use.

I suggest that you concentrate on the pure ergonomics and functionality of the design before trying to beautify it. There is a huge platform for a more funtional/efficient design for this product.

Could you indicate the size of the thing and how does it indicate it’s pressure level to the user?

Have you thought through the color? it does indicate what fire type it is for.

There are two reasons that the head is pointing down at a 15 degree angle; This way the relatively heavy canister can hang plum while the user puts out a fire 6 feet away from themselves as well as aligning the wrist and forearm when the unit is held below the waist (as most of my users who I filmed using extinguishers did in fact hold it). However my professors have pointed out that the former is only a useful feature if the fire is in-fact on ground level. so perhaps a compromise angle might be best.

Yo, can you give me an example of an architectural product. I think I understand what you are saying though.

Thank you for some very helpful criticism. I’ll post more

I was under the impression that it it was a smaller extinguisher like what I have next to my stove. Not meant for putting out a burning mattress or clearing an escape route. Some scale indicators would be nice. And I’d say it might be worth thinking about what kind of motor skills the person would have in the high stress situation, like how easy it is to grab and use without looking directly at it. Or could you operate it correctly if you still had your oven mitts on?
On a side note, nice parting lines on the render, simple stuff like that does wonders.

Yo, can you give me an example of an architectural product. I think I understand what you are saying though. 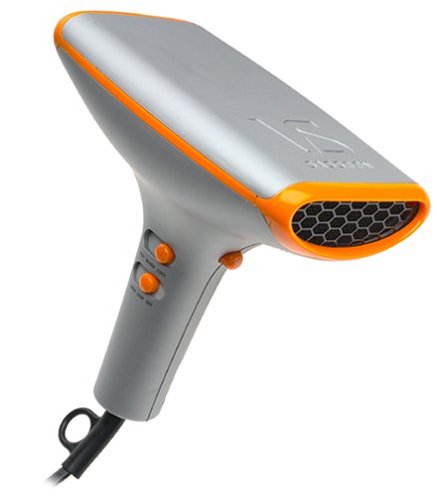 Yo, thank you for the great post. I am defiantly inspired. I think I’m going to go back and do some sketching and get it where it needs to be.

Well anyhow here is where I am as of now:

still a ways to go…

scale? handle looks too wide to me.

Nice Evolution dude, you are getting there.

i think there are really two aproaches here:

1> Look at me- ver nicely designed product, where every single elemnt is functional and beautiful. It demands to be looked. If a guest came over they would say, damn, that’s a cool…

2> Seemless blend into the environment. Every element is considered functionaly, but aestheticly is designed to not be noticed. Here, no one would look at it, unless they needed it, or unless they bumped it, and then they would say, damn, that’s a cool…

Check out this crappy little sketch, sorry for the poor quality, but I threw it down on a post it note.

I wanted to take the concept too far the other way, into a very functional, bauhaus look. The one take away from it might be that you could look at it a bit more holisticly, design the entire form, and detail that, rather than designing the individual pieces and letting that add up to the overall.

Maybe there is something kind of in he middle for you. I might not know what I’m talking about here, just my take:

I think the way Samsonite has been detailing their hard cases is pretty cool, Might be something here to look at, these are from their UK site.

I think I want my final product to be in more in the look at me category. Not like James Dyson vacuum cleaner wild transformer look but an elegant I’m here to protect you look. I think the product sort of begs to have the user know exactly where it is at all times anyhow

As far as integrating the whole design. this is something that needs to happen. In the early stages of the project I really was focusing on human factors concerns as far as holding the unit and not really on the design as a whole. I think now If I can integrate my initial research with a design that encompasses the whole object and whole experience of putting out a fire I will end up with something really good.

Thanks again for the great posts.

These have a nice, understandable look as well:

Our customized suite of health and wellbeing products build daily habits in a wide range of areas, driving incredible results.

Sorry for the overload, hope some of this was usefull, once I get something in my head…

BD-good direction, The metal handle is nice but needs to be proportioned. Looks like you need to roll some of the sharp edges on the stamped parts.

Are there better color solution-perhaps up the chrome and understate the red or…?

The pin looks like you could beef it up. Instead of a commodity design why not make the pull ring a cast detail so that it has a more luxury feel

hi blender,
good handle design but i have few doubts about the design

as you explined in the initial writeups that single hand operation is needed.
where as this needs two hands to operate

is it for one time use or multiple use?

and how muh importance are you giving to the functional aspect?
as your design shows direct adaptation from the existing mechanisam.
just curious to learn the facts… never mind if was harsh.
sisir