I mean really… this is functional industrial design? A new denomination gold coin; 5$ Another silver 1$ coin (how many are now four?). And another attempt at the half-dollar. The same coin in gold, silver, and silver plate??? It looks more like a Franklin Mint product than a legitimate form of U.S. legal tender.

Clever to be sure, especially given the 75th anniversary of the Baseball Hall of Fame connection, but if coins are supposed to lengthen the usable life of currency (over paper), then what is the point of this design?

As featured on Core’s front page. 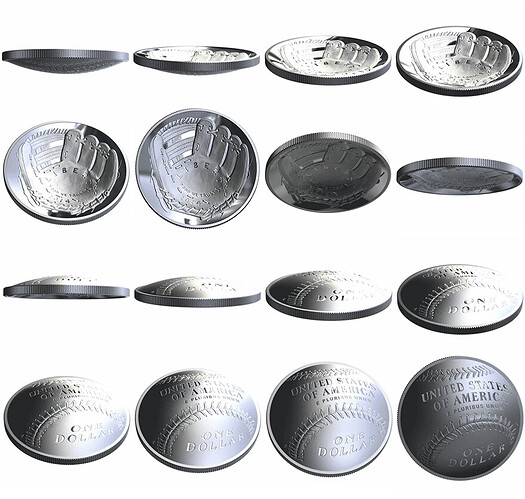 Of course, it can be argued that this is not industrial design, it is “art”.

Another thing to ponder…

H.J. Res. 192, approved by President Roosevelt on June 5, 1933, provided that obligations payable in gold or specific coin or currency are contrary to public policy, and that those obligations could be discharged dollar for dollar in legal tender. After that resolution was adopted, currency of the United States could not be converted into gold by United States citizens, but the Treasury would convert dollars into gold for foreign governments as a means of maintaining stability and confidence in the dollar. Because the dollar was no longer freely convertible, one could consider that the United States was no longer on the gold standard at that time. If, however, one considers the gold standard as a monetary system in which the unit of money is backed by gold even if the monetary unit cannot be converted into gold, one could argue that the United States went off of the gold standard on August 15, 1971 when President Nixon announced that the U.S. dollar would no longer be convertible into gold in the international markets. The President was able to suspend the ability to convert the dollar into gold because > there was no legal requirement that the United States exchange gold for dollars. > (> my emphasis added> ) On December 18, 1971 the President devalued the dollar, and even though the devaluation was effective immediately, only Congress could officially change the gold value of the dollar. Early in 1972, Congress passed Public Law 92- 268, which gave formal approval to the December 1971 devaluation.

so is that real?

At first I thought it was interesting until I realised that most of the people I know hate carrying coins, yet these being curved will take up a lot more space. It’s not like they will always perfectly nest together.

I like it. Here the mint often sells collector/ limited edition coins that are strictly for collectors, even though they are legal tender. The disclaimer is:
“While they display a denomination, these coins are not intended to be put into circulation, and are worth a lot more than their face value.”

A coin with face value of $5 will sell in a special case with certificate of authenticity etc. blah blah blah for $120, so it’s just an artificial market just for numismatists, like this:

The mint lists 58 “Uncirculated Coins” for sale in their online shop. This is where grandma spends $25 as a gift for little johnny on four one dollar coins, thinking in ten years it’ll be worth thousands, and little johnny rips it open as soon as she’s gone and spends it on chocolate.

I posted in reply to the article. Commemorative coins are for raising funds. They are art, a display of technology and culture. Relax, you’re not supposed to design a vending machine to accept them.

Imagine what a wallet full of them would feel like in your back pocket.

Saw this on Pawn Stars a little while ago - Ancient Byzantine cupped coinage… pretty cool considering it was done hundreds of years ago and just now the same idea is resurfacing. I think it’s interesting that while one side of the coin would wear relatively quicker than normal, the concave side of the coin would keep it’s detail. I would like to know if the designer knew this, or if this is simply just another case of everything has already been done.

The wikipedia page for this ancient coinage says, “The exact reason for such coins is not known, although it is usually theorized that they were shaped for easier stacking.”

With this being a collector’s coin and not intended for circulation, I think it’s an innovative design and makes better use of all three dimensions than those presidential dollar coins and the low relief.